A Nation Marches Back To Normalcy: Memorial Day Parades Are (Mostly) Back After 2020 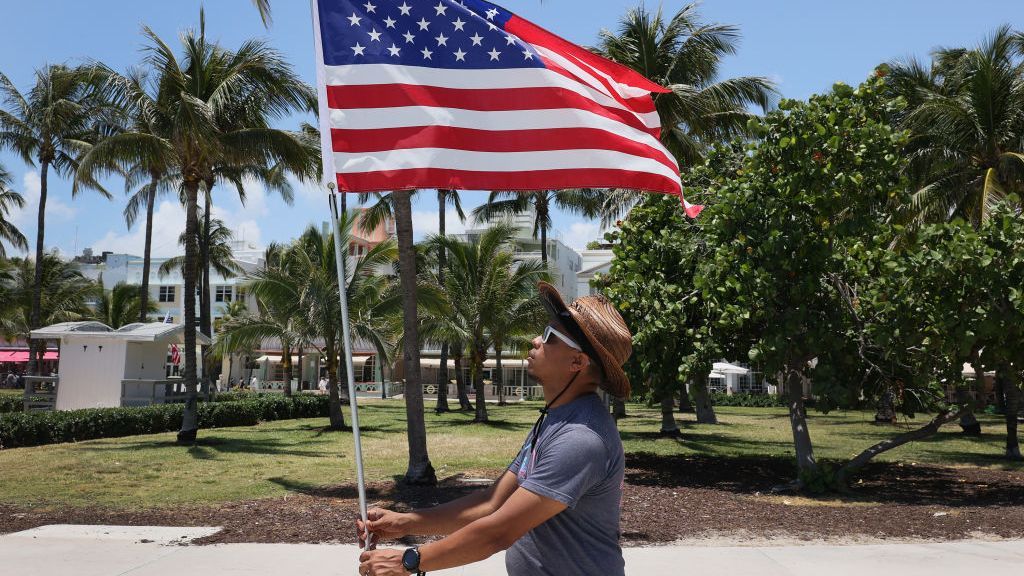 A man places an American flag in the ground before the Air and Sea Show in Miami Beach, Florida. The show honors and pays tribute to the military and first responders who have paid the ultimate sacrifice. (Joe Raedle/Getty Images)

In America’s small towns, the return of Memorial Day observances on May 31 will for many hint at a coming return to normalcy and mark the start of a new summer after a tough 18 months.

The federal Memorial Day holiday, which honors members of the U.S. military who lost their lives while serving, is viewed as the unofficial start of the American summer, and the cancellation of parades around the nation last year over coronavirus fears was a harbinger of a lost summer.

Like many towns across the U.S., the Recreation and Parks Department of Falls Church, Virginia, is bringing back their annual Memorial Day Parade after last year’s event was canceled due to the pandemic, according to the department’s director, Danny Schlitt.

Schlitt told Zenger News that the return of the event — which he said usually draws about 15,000 people, about 1,000 more than the population of Falls Church — is an important moment.

“This is the biggest special event of the year for the city of Falls Church,” Schlitt said, adding that he hoped the parade would be remembered by attendees as a turning point to better times.

“It would be nice if people think of Memorial Day 2021 as a step back to what was once normal.”

However, Schlitt still described this year’s Memorial Day parade as a “scaled down version” of the usual festivities. Instead of running through Park Ave., a major thoroughfare in town, the parade will this year travel through neighborhood streets, he said, so locals can watch from home.

The return of parade will be helped by exploding vaccination numbers in Virginia.

In Falls Church, 61 percent of citizens have already received a coronavirus vaccination, according to Covid Act Now, an independent nonprofit that tracks vaccine shots. That allowed Virginia Gov. Ralph Northam to change the state’s pandemic guidelines to reflect guidance from the U.S. Centers for Disease Control and Prevention, including lifting a universal indoor mask mandate.

“I think the summer is also trending up, as far as more regular,” Schlitt said. “What it says for the future is [that] we’re resilient as citizens, as Virginians, and maybe as Americans in our ability to get through this, and move on to better times.”

Vietnam veteran Joseph Dunton said he anticipates a similar kind of Memorial Day in Emmaus, Pennsylvania, a town of about 11,000 people in the state’s east. As president of the Emmaus Veterans Committee, Dunton planned the town’s annual parade.

Like Falls Church, Emmaus’ 2020 parade had to be canceled, he said. But its return this year is now a cause for celebration in the town — and a sign that things may soon get better.

“It’s great to have the parade back under the pretext that we have,” Dunton said. “Everybody has supported us. Everybody seems to be happy that we’re having it again.”

In Lehigh County, where Emmaus is located, 58.7 percent of people have already been vaccinated, according to Covid Act Now. Pennsylvania also plans to end mask mandates on June 28.

Dunton said he expects the parade to attract 300 to 400 people — a small number compared to some other towns, but similar to years before the pandemic.

“As far as we’re concerned, the Borough has given us approval, and Covid requirements are loosening everywhere that I’ve been,” Dunton said.

However, in some of America’s larger cities, parades are again being canceled or altered.

It will be the second year in which the Little Neck-Douglaston Memorial Day Parade, the largest parade in New York City, will be canceled due to Covid-19.

Victor Mimoni, a Queens native and executive director of the parade, told Zenger that the New York City Police Department had denied the association’s request for a parade permit. Mimoni said he was disappointed, citing a cannabis parade that was allowed in the city on May 1.

In Queens County, 57.3 percent of residents are vaccinated, according to the Covid Act Now figures, but the permit denial was a painful reminder not everything has returned to normal, Mimoni said.

“There’s a big, empty feeling in the neighborhood,” Mimoni said. “There’s an empty space in my existence right now.”

Despite the cancellation, Mimoni said parade organizers will still host smaller flag and wreath-laying ceremonies, as well as an interfaith service, over Memorial Day weekend. A local group of veterans will also place flags at a nearby veteran cemetery on Saturday.

In Columbia, Missouri, Raymond Ruetsch, the president of the Mid-Missouri Chapter of the Military Officers Association of America, said his town was not taking any chances.

This year, like last year, the Memorial Day services in Columbia will be fully virtual.

Each year, the MOAA hosts a wreath-laying ceremony at the Boone County Courthouse. The ceremony normally draws a crowd of 100 people, he said, including various local veterans groups. But less than 15 people will join in the physical part of the ceremony this year.

“We wish we could have done a full-blown ceremony with all the veteran groups, but we understand the health conditions, and a lot of these veterans are older, and are more susceptible [to the coronavirus],” Ruetsch said.

Still, Ruetsch said he was confident the ceremony would return to full capacity next summer.

Back in New York, Mimoni said that while the various Memorial Day ceremonies around the U.S. may all look different this year, the meaning of the day itself remains unchanged.

“[Memorial Day] means a day to honor all of my friends who never came home,” he said.

The National Memorial Day Concert will air on May 30 at 8 p.m. ET, and will feature a 90-minute pre-taped special. It will be available on PBS and the American Forces Network.