The actor played a villain from the Marvel Universe, but now he wants to portray characters that inspire Latino youth.
By Cesar Arredondo May 28, 2021
Facebook
Twitter
Linkedin
Email 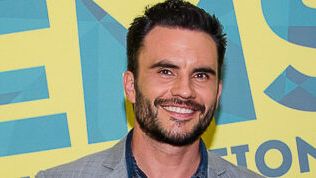 Playing a bad guy is nothing new to Juan Pablo Raba. But playing opposite one of Hollywood’s biggest action stars, the Colombian-born actor believed he had to do something special. So he auditioned in character as a drug cartel lord. And he nailed the part.

Raba co-stars with Liam Neeson in the action thriller “The Marksman,” a Voltage Films production now available on digital.

While Raba and three-time Oscar-nominated director Robert Lorenz (“American Sniper”) agreed on how his character should look, the film’s producers were unsure.

“The day of the audition, I decided to shave my head … I wanted to scare them a little, so they could believe I could do it,” said the actor. “I created this whole persona and went to the audition in character, and I guess they were a little scared by it.”

In “The Marksman,” Rosa (Teresa Ruiz) and Miguel (Jacob Perez), a mother and her young son, trying to escape drug traffickers, must cross the border. Jim Hanson (Neeson), an anti-immigration vigilante living on the Arizona-Mexico border, discovers them illegally entering the United States. Hanson and the drug dealers exchange shots.

Rosa is killed in the shooting, and the vigilante kills the drug lord’s brother. Hanson ends up torn between two choices: leave the kid behind or protect him from certain death at the hands of Mauricio (Raba).

Just like Neeson, tough-guy roles have a way of finding Raba, an athletic actor with good looks and a kind smile who can effortlessly transform himself into a bad guy. Questionable characters like Mauricio are a preference. “Modern television and film have given us the opportunity to create complex and interesting characters, especially villains,” said Raba.

He seems to relish the complexities of multilayered characters who do bad things to good people.

“It’s fun to play a villain because you have more margins than when you play a good guy,” the actor said. “But do criminals like Mauricio have a heart? There is a moment in “The Marksman” in which Raba attempts to address the question.

Playing a bad guy against Neeson was both exciting and challenging, said the South American star. And also a big responsibility.

“You need to create something believable, right? Something that actually creates a counterpart for an actor like Liam,” he said. “That’s why I decided to go a little bigger than usual.”

The intention was to give the impression “there was something dangerous enough to make Liam run.” Not an easy task as Neeson is known for playing characters that take the fight to the enemy, such as retired CIA operative Bryan Mills in the blockbuster “Taken” film series, where he battles international criminals.

“The Marksman” is not the first film where the South American actor portrays a drug dealer in Hollywood. He recently played Juan Diego “El Catrin” Zamora, the head of a small family cartel, in the CBS All Access TV series “Coyote.” Two years ago, Raba was cast as the drug kingpin Diego Garcia in the action film “Peppermint,” opposite Jennifer Garner.

Raba is aware of the toxic impact of negative stereotypes. He emphasizes he doesn’t want to portray Latino bad guys all the time. “That’s not what I want to do as an actor because as a Latino, I know that is not who we are,” he said.

However, improving the standing of Latinos in Hollywood will take more time, according to the actor, who expresses optimism in the future. “We are playing a chess game, but will eventually make sure that people understand who we are,” he said.

Raba remains committed to being a “great professional” in all of his performances.

Joining forces with Venezuelan star Edgar Ramirez (“Yes Day,” “The Bourne Ultimatum”), Raba founded Drive Pictures. He executive-produced and starred in the crime thriller “Secreto de confesión,” the company’s only film made since 2013, as Raba’s Hollywood career began taking off.

He appeared in the English-language “The 33,” the 2015 biographical survival drama based on the disaster of 33 miners trapped inside a Chilean mine. Starring Antonio Banderas, the film opened more international doors for Raba. That same year, the former “galán de telenovelas” (soap opera hunk) was cast in the ABC series “Agents of S.H.I.E.L.D.” as Joey Gutierrez, a superhuman with the power to melt and reshape metals, one of the few Latino superheroes on screen.

In addition to “Peppermint” and “Coyote,” he appeared in the military drama “Six” on A+E and the crime drama “Narcos” on Netflix.

Asked whether he would like to play other superheroes in the Marvel Cinematic Universe, Raba said: “I would love to work toward the idea that we can create … superheroes. But my quest right now is to portray characters that Latinx children and youths can look at and say: ‘Wow, it would be cool to be like that one day.’”