A largely privately-funded quest for proof that there was fraud in the swing state pits the GOP against itself.
By Hamil R. Harris May 27, 2021
Facebook
Twitter
Linkedin
Email 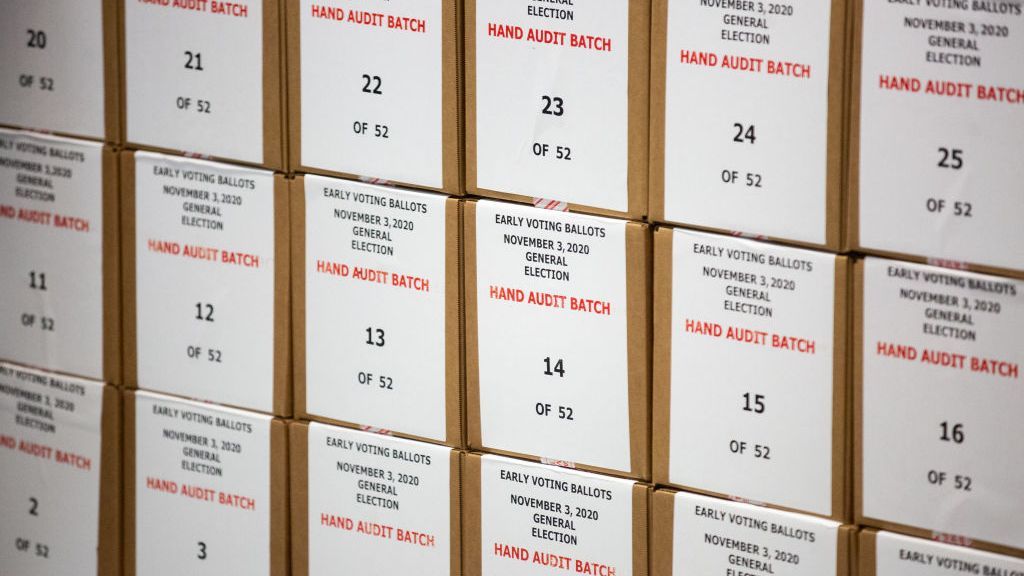 Election ballots are pictured in Maricopa County, Arizona, on October 31, 2020. Recounts haven't changed the outcome and now an audit of voters is Republicans' latest tactic to draw attention to what they say are flaws in the election system there. (Courtney Pedroza/Getty Images)

Meanwhile, similar audits are starting this week in Georgia and New Hampshire, provoking debates between Democrats and Republicans — and among Republican officials themselves.

While no audit can remove President Joseph R. Biden Jr. from the White House, the stakes of this highly technical ballot integrity fight are high: The vote-counting rules used in the 2022 congressional elections, where the Democrats will defend a razor-thin majority of nine seats in the U.S. House and a 50-50 U.S. Senate deadlock Democratic Vice President Kamala D. Harris breaks ties.

The U.S. House certified Biden as the election winner on January 6, 2021, foreclosing any legal challenges to that result.

“We need to discover what really happened in 2020 in order to fix the election in 2022 and beyond,” said Patrick Byrne, a supporter of the ballot audit and author of “The Deep Rig,” a book about allegations of 2020 election irregularities.

Byrne denied the audit is an attempt to overturn the 2020 presidential election. “If the audit turns up that there is very good election integrity in Maricopa, then that tells us that all of our concerns are misguided,” Byrne told Zenger News. “But if it turns out, as we expect it will, that there is a great deal that shows the reality is quite different than what the numbers have presented, then we have to look at all of the institutions that failed.”

The Maricopa County audit was delayed for a week due to graduation ceremonies scheduled for the Veterans Memorial Coliseum in Phoenix and is expected to continue into June.

While Maricopa County votes have been recounted twice before, the Arizona audit now underway is not technically a recount, which would check the totals against the ballots cast. Neither of the two recounts found any significant irregularities.

Instead, the current audit examines two broader questions: whether each individual voter was legally permitted, under state law, to vote in the 2020 election and whether all the state’s vote-counting procedures for scanning, counting, and storing digital files were followed. There are no final results yet, though the debate is raging online and in state senate hearing rooms.

Trump faulted Maricopa County Republicans and Republican Gov. Doug Ducey. “Why is he rushing to put a Democrat in office?” he asked online in November, “especially when so many horrible things concerning voter fraud are being revealed at the hearing going on right now.”

Maricopa County Recorder Stephen Richer fired back: “We can’t indulge these insane lies any longer. As a party. As a state. As a country.” Richer, a Republican, defeated a Democratic incumbent in January.

The audit is massive and massively controversial. Some 2.1 million ballots and 400 voting machines are being reexamined by outside auditors under the direction of the state senate. The audit has so far uncovered both potentially illegal votes and some lapses in official vote-collecting procedures, according to Republican state senate officials. Meanwhile, Republican officials in Maricopa County board of supervisors have denied any procedural shortcomings in an 11-page letter sent this past week. Since the county demanded that the state senate preserve all documents and computer records, county Republicans seem to be setting the stage for a lawsuit against the GOP-led state senate.

Due to the pandemic, elected officials and judges changed many rules regarding mail-in ballots, absentee ballots and voting hours in the weeks and months before one of the most intensely fought presidential contests in American history.

Since these changes largely didn’t go through state legislatures and were not widely covered by the press, the supporters of losing candidates — mainly Republicans and most loudly former President Trump — have claimed that these procedural changes were illegitimate. State and federal judges have so far declined to hear, or dismissed on procedural grounds, more than two dozen such lawsuits.

Now, in the wake of the Maricopa County audit, judges and state lawmakers are increasingly yielding to demands for similar examinations. A judge in Fulton County, Georgia, the most populous of Atlanta’s three counties, recently ordered the unsealing of nearly 150,000 absentee ballots and announced plans to set strict rules for the ballot-examination process. Similar efforts are set to start in a rural Michigan county, and in a New Hampshire town that was once home to former Trump campaign manager Corey R. Lewandowski.

Originally the fight was between Democratic Party officials, who largely supervised the collection and counting of votes across the Grand Canyon State, against Republican Party officials who dominate the state legislature and whose presidential candidate won Arizona in 2016 but lost it in 2020. Trump has repeatedly called his defeat a “fraud” and his supporters have demanded investigations.

Arizona Secretary of State Katie Hobbs, a Democrat, condemned the outside audit on various grounds: that policies and procedures were not publicly posted, that auditors have no previous experience in elections, that the process is secretive and that the effort is pointless since her office conducted two recounts after the initial election tally. The Maricopa County Board of Supervisors, led by Republicans, has largely echoed these concerns.

“We know that this audit is just a half-baked attempt to discredit the result of the 2020 election,” Edder Diaz Martinez, Director of Communications for the Maricopa County Democratic Party told Zenger News. “That election has been over for six months and this is just an attempt to pander to the extreme right.”

Democrats point out that the Arizona Republican Party is paying $150,000 to Cyber Ninjas, the contractor selected by the GOP-led state legislature, and further questioned the Florida-based firm’s integrity, pointing out that its CEO, Doug Logan, helped lead the “Stop the Steal” campaign prior to the U.S. Capitol riot on Jan. 6.

Cyber Ninjas denied Hobbs’ claims of secrecy by citing an uninterrupted 24-hour live stream from the coliseum in Phoenix where the audit is underway. Since the audit began, Cyber Ninja employees can be seen on the livestream shining ultraviolet lights on ballots and conducting computer forensics. Their policies and procedures are also posted online.

Zenger News emailed the media contact for Cyber Ninjas, but there was no response.

“For months mainstream journalists have been stating over and over that all these claims were ‘baseless’ and ‘had no evidence’ over and over like parrots,” Byrne said. “Maybe it is time they start doing some independent thinking.”

Biden won Arizona’s 11 Electoral College votes by defeating Trump with 49.36 percent to Trump’s 49.06 percent, a difference of 10,457 votes, according to official tallies.