Pro and con comments can be submitted to the state’s government until July 4. 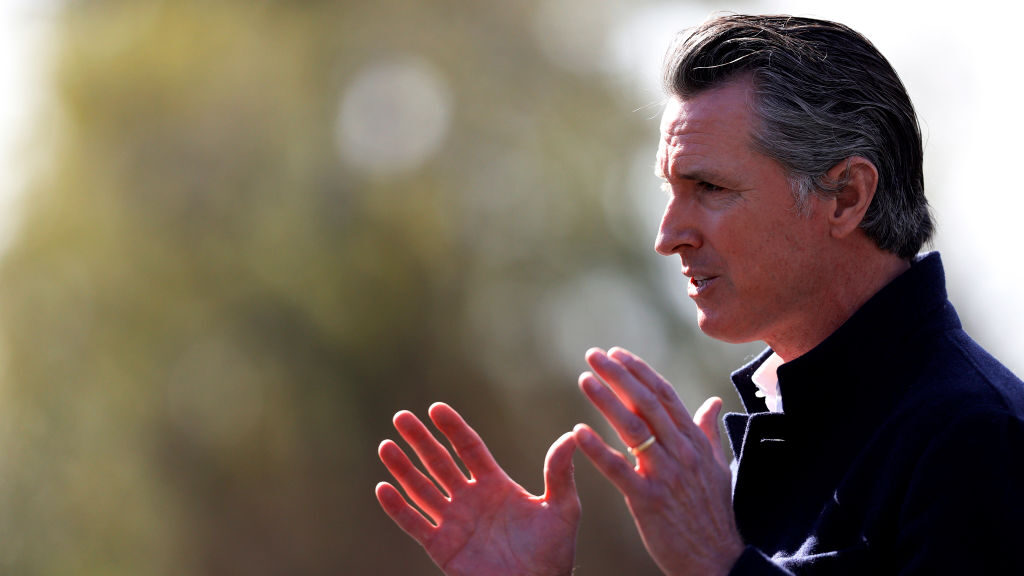 Some have questioned whether the fracking and oil ban were proposed to shore up support from environmentalists, since Newsom is facing a tough recall election. (Justin Sullivan/Getty Images)

Fans and foes of hydraulic fracturing in California have a little more than a month to offer their opinions on Gov. Gavin Newsom‘s planned ban of that controversial oil-extraction method, also known as fracking. The governor’s proposal has raised questions over timing, effectiveness for climate change and legality.

According to the U.S. Department of Energy, fracking has been used for over 60 years in over one million wells, and involves “large volumes of water and sand, and small volumes of chemical additives are injected into low-permeability subsurface formations to increase oil or natural gas flow.”

While some environmentalists have praised the order as an overdue — if not already too late — step forward, the local oil industry questioned whether Newsom could take the unilateral step, which comes two months after a similar legislative ban failed to move forward in the California Senate.

On April 23, Newsom asked the state’s Geologic Energy Management Division to issue a rule that would ban fracking, a proposal of which was released on May 21. The public is invited to send written statements to the department by July 4, which will then be reviewed and considered.

Newsom not only ordered the state to pursue the fracking ban, he also pressed another state agency, the California Air Resources Board, to set up an outright ban on all oil extraction by 2045.

“The climate crisis is real, and we continue to see the signs every day,” said Newsom, a Democrat. “As we move to swiftly decarbonize our transportation sector and create a healthier future for our children, I’ve made it clear I don’t see a role for fracking in that future and, similarly, believe that California needs to move beyond oil.”

The governor also highlighted legislation that tightened regulation on fracking in 2014 and increased administrative review. The agency developed new regulations to protect the health and safety of workers and communities near oil fields, as well as bump up bonding requirements for oil companies to ensure a more thorough cleanup of sites.

Local oil industry officials have questioned whether the governor’s mandate is legal, implying it will be challenged in court.

“Through all means possible, we will join with workers, community leaders and others who wish to protect access to safe, affordable and reliable energy to fight this harmful and unlawful mandate,” said Catherine Reheis-Boyd, president and CEO of the Western States Petroleum Association. “We will be a key part of an equitable energy future for California.”

California oil industry officials estimated the order would reduce the state’s oil production by 20 percent, with overseas producers stepping in to fill the gap.

“It’s disappointing that the governor’s legally questionable announcement will undermine California’s climate leadership. Curbing in-state production through a well stimulation ban would not change the fact that Californians demand 1.4 million barrels of oil each day,” said Rock Zierman, CEO of the California Independent Petroleum Association. “Instead of meeting our vast needs with California oil produced under the planet’s strictest regulations, we would economically reward foreign regimes who do not share our environmental standards and human rights values.”

Meanwhile, some environmentalists contend the order’s timing will minimize its impact.

“Time is not a luxury we have to tackle a crisis of this scale,” Brandon Dawson, acting director of Sierra Club California, said in a statement. “California needs to move away from fossil fuels to best protect frontline communities and our unique, natural environment. However, the governor’s statement falls short of a mandate. California needs prompt state action to confront the climate crisis. This means shortening the timeline for the fracking ban and requiring the phase-out of oil and gas production earlier.”

By allowing additional new permits through 2024 and permitting existing operations to continue, oil producers will have time to prepare for the moratorium by getting their fracking permits before the deadline. One writer for the Sierra Club said that a 2016 change in state regulation already prompted most state oil producers to acquire any fracking permits they needed.

“It takes only a few days to frack a new reservoir, after which oil can flow unimpeded for the next 20 years. By the time the proposed fracking ban kicks in three years from now, most of the rock that traps the state’s recoverable oil will already have been propped open, freeing vast pools of crude that can be drawn up for decades,” wrote Judith Lewis Mernit in the club’s Sierra magazine.

Additionally, some have questioned whether the ban was proposed to shore up support from environmentalists, as Newsom is being challenged in a tough recall election for alleged “government overreach” that has so far met the requirements to go to the voters, though there still are some review steps ahead.

The California Geologic Energy Management Division is accepting comments on the fracking ban through July 4. Such input can be submitted via email at [email protected]

The fracking ban isn’t Newsom’s only crackdown on fossil fuels. In Sept. 2020, he signed an executive order requiring that by 2035, all passenger automobiles sold in the state must be zero-emission, effectively banning the internal combustion engine.