Pay No Attention To The Candidate Behind The President: Advertising Strategies In Mexico’s Election

Some ads highlight the president’s image or the party’s logos while hiding the local candidate’s face.
By Érika Flores May 26, 2021
Facebook
Twitter
Linkedin
Email 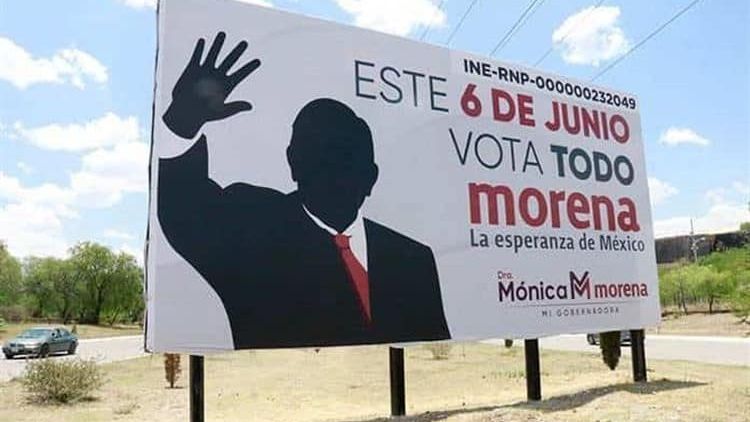 In Mexico's midterm election, campaign signs often do not present the candidates' faces or platforms but references to the parties or their leaders. This billboard features President Andrés Manuel López Obrador's silhouette in support of a local candidate. López Obrador is considered the moral leader of the Morena party. (La Silla Rota)

MEXICO CITY — In the lead-up to Mexico’s June 6 election, political parties and coalitions are chasing votes by focusing on their brands, rather than showcasing candidates, according to data compiled by the SIMEI, the National Electoral Institute’s office in charge of monitoring electoral advertising on billboards and print media.

Of the 70,477 billboards that the parties have displayed throughout the country, 33,303 call for a vote favoring the “party brand”; 31,000 advertise the parties’ proposals, and only 6,093 show a candidate’s portrait.

The National Regeneration Movement (Movimiento de Regeneración Nacional, Morena) party has chosen to display messages such as “we are with you know who” [referring to President Andrés Manuel López Obrador, AMLO] and use the president’s silhouette in some billboards.

Federico Berrueto, the Strategic Communication Cabinet’s General Director, said that the parties are mistakenly promoting massive campaigns for themselves instead of betting on the candidates’ images when midterm elections focus on solving local needs.

“The strategy must start from the local perspective, not the national. If the parties want to win votes, it is a mistake to promote themselves through their initials. They have to do it through their candidates,” he said.

Ximena Mata, the manager of Integralia Consultores, says the strategy is reasonable. “Morena is exploiting its popularity as the ruling party as well as the popularity that the president still has. That is why it calls people to vote for the party rather than the candidates.”

Integralia conducted a study that speaks to this. Based on surveys published by the media, the firm analyzed Mexicans’ preferences for governor at the beginning of the election process. The results indicated that “Morena could win 14 out of 15 states. But when the party announced the candidates’ names, the figure changed, and today it could win 8 out of 15,” said Mata.

On the other hand, the opposition bets more on the coalition’s name, “because it is difficult to explain how three parties [Institutional Revolutionary Party, PRI; National Action Party, PAN; Democratic Revolution Party, PRD] that used to be enemies are now running in an alliance.”

Berrueto said that he has learned through his work with the Strategic Communication Cabinet that a candidate’s face has some weight in the voters’ decision. That is what the polls and public opinion analysis in Mexico have shown since 2010.

“Parties are very discredited now,” he said, which is why he considered it wrong to bet on their names as an incentive to win the vote. “The least badly evaluated is Morena, which is the newest.”

Berrueto called attention to the case of Layda Sansores, Morena’s candidate for the Campeche government. Sansores’s billboards display her image. But instead of her shadow, one can see the silhouette of AMLO, who is also Morena’s moral leader.

Clara Luz Flores, the party’s candidate for governor of Nuevo León, also wanted to benefit from AMLO’s popularity. At a rally, she displayed a photograph of herself with the president and asked attendees if they had been vaccinated. “Vaccines are a significant achievement of the president,” she said.

Morena’s reliance on the president’s coattails “can be a good strategy in areas where the chief executive is well-rated. But Layda Sansores is using AMLO’s image, and she is in third place. So, it’s not a very effective strategy there,” Berrueto said.

Using AMLO’s image in Nuevo León “would be a suicide” because he has no followers in that part of the country, he said.

Berrueto believes that, although billboards and ads on fences create the electoral environment, they are hardly a communication instrument with voters. “Their choice is not going to be affected no matter how many billboards or fence ads candidates use.”

Highlighting the person, erasing the party

Opposition parties have resorted to a different strategy. For federal deputies, the Va por México coalition prioritized the image of the candidate with the coalition’s logo, “and the parties’ logos are hardly visible,” according to Mata.

The ads “include the candidate’s face and a slogan. The explanation I find is that the traditional PRI, PAN and PRD have had a bad reputation in recent years; the polls reflect that. The president blames them for the country’s problems,” she said, explaining that from AMLO’s perspective, their governments embraced neoliberal ideology.

She said that this year’s circumstances are not the same they were during the 2015 midterm election. “I get the impression that [then-President Enrique] Peña Nieto was not as immersed in the election process as President López Obrador is now.”

Peña Nieto did not have the popularity that López Obrador has, and the former’s party, the “new PRI,” weakened when several corruption scandals came to light.

Mata concluded that parties’ and coalitions’ current electoral strategies depend more on the political place they stand in this very moment. “Morena adds the president’s popularity to the race, and the opposition focuses more on the person and less on the party.”

Looking with a magnifying glass: the local level

The 15 states that elect a governor in the midterms are not necessarily the places where the parties have displayed the largest number of billboards. The streets of Mexico City, and the states of Mexico, Jalisco and Veracruz have more campaign signs than those of any other state.

The SIMEI has counted 10,526 billboards in the State of Mexico, where 125 municipalities will renew governments. Among them, 2,102 have been generic publicity, prioritizing the image of the parties over that of the candidate.

Based on the data that the parties themselves report, the Electoral Institute recorded, “Vote PAN,” “Vote PRI,” “Morena, the path of hope,” “Going for Mexico,” “Citizen Movement, proven results” and “I support AMLO” among their generic messages.

The following state with the highest number of billboards is Jalisco, with 7,150. Veracruz follows, with 6,143, where the messages of Morena, the ruling party, prevail.The majority of billboards in Veracruz — 5,754 — include generic messages referring to Morena’s principles: “With hope, we achieve the change that moves us” and “The Fourth Transformation is underway in Veracruz.”

Mexico City serves as the stage for 5,060 billboards. Almost half — 2,400 — focus on government proposals, while only 2,000 include generic messages, and 641 are personalized.

Generic messages in the capital read: “Smile, the Tláhuac municipality is going to win,” “Vote for Morena’s Mayor,” “Going for Mexico, PAN,” “For an Iztacalco municipality 100 percent working” and “If you want to recover your job, for RSP [Progressive Social Networks] you must vote.”