He credits a larger understanding of the world as an asset for DesignBridge, his company. One of its most significant projects is a new phase of Chicago's Roosevelt Square.
By Marcelo Wheelock May 26, 2021
Facebook
Twitter
Linkedin
Email 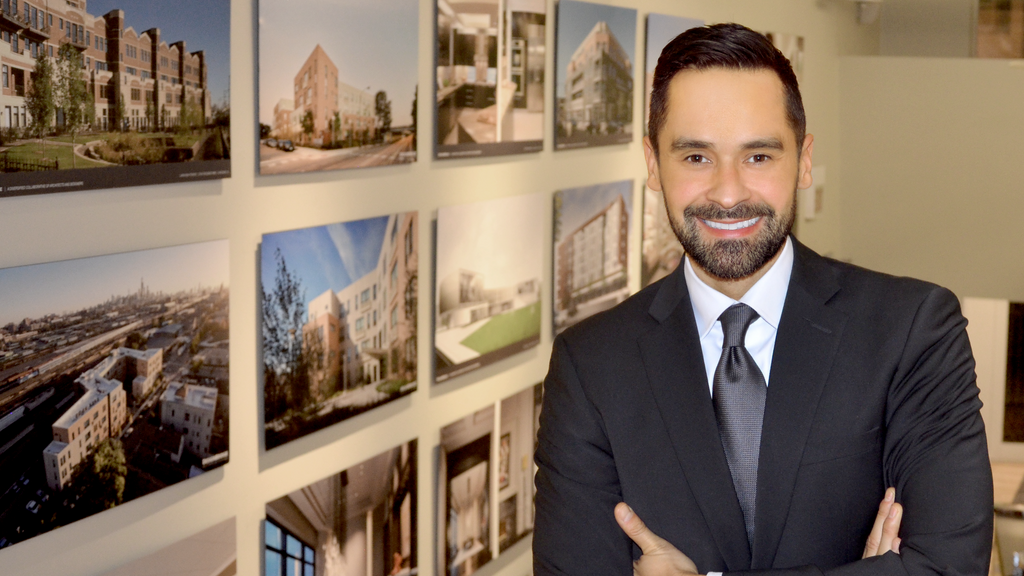 Gabriel Ignacio Dziekiewicz has inherited his father's architecture and design firm, and has managed to make it grow, even throughout the pandemic. (Negocios Now)

“A lot of what I do is continue his legacy,” said Gabriel, DesignBridge’s president and Chief Design Officer. Born and raised in Chicago, Gabriel is also an architect. He earned his bachelor’s degree at the Miami University in Oxford, Ohio, and completed his master’s at the University of Illinois. His mother, María Sosa, who is Puerto Rican, helped him grow the business.

Gabriel and his father worked together for eight years on architecture and interior design projects, including residential and mixed-use developments, affordable housing, academic buildings, hotels, and restaurants.

Victor Ignacio passed away in 2015.

Dziekiewicz said his Latino roots have influenced his work.

“Having diverse origins and a Latino heritage has broadened my understanding of the world, the city and its diverse communities. It has given me a window to different cultures with unique values, traditions and struggles,” he said.

“It has made me a better architect because architecture is a social art form. We design spaces for people, to empower neighborhoods and strengthen cultures and communities.”

Dziekiewicz and his team have earned various recognitions, including the Richard H. Driehaus Award for Architectural Excellence in Community Design, for Casa Querétaro, in Pilsen, an “urban oasis” that efficiently controls storm drainage and maximizes sunlight.

Architecture is one of the first sectors to feel the impact of an economic recession. The COVID-19 pandemic hit hard on many firms. But DesignBridge remained busy in 2020, with various projects on the pipeline, said Dziekiewicz.

“Fortunately, we grew; we continued with several projects, and we even got new ones,” Gabriel said, noting the company is now working on a variety of projects on the north, south and west sides of Chicago, as well as its suburbs.

One of DesignBridge’s most significant projects is a new phase of Roosevelt Square, with an investment of $80 million dollars.

“It is part of a larger project, the redevelopment of the Abla Homes. We were lucky enough to get a small part. We got the opportunity to raise two buildings, with a total of 140 units. It is a great honor to be part of this project,” he said.

Dziekiewicz’s company will also develop a new four-story, 37-unit affordable housing complex in Oak Park, as well as the redevelopment of Little Village’s Xquina Café, including a business incubator, spaces for artists and a community café.

In addition, Dziekiewicz’s team will be in charge of the Durango House project, two three-story, 50-unit affordable housing buildings in Pilsen.

Little wonder the architect views the future with optimism.

«Previous Post
Pay No Attention To The Candidate Behind The President: Advertising Strategies In Mexico’s Election»Next Post
A Revolutionary Blood Clot That Can Heal Chronic Wounds