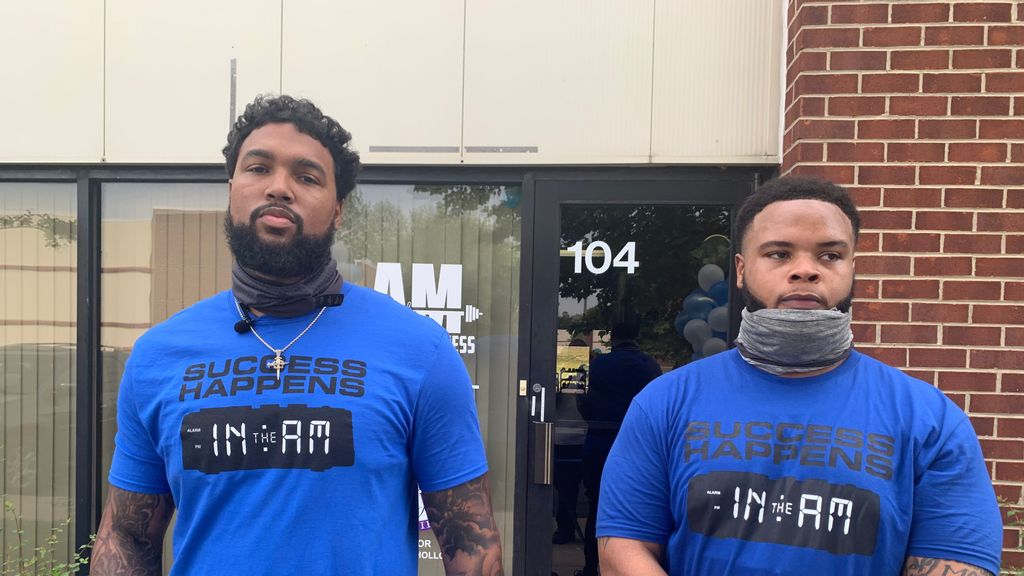 UPPER MARLBORO, Maryland — It’s a Saturday morning, and the new A&M Sports and Fitness is packed with high school and college football players slamming their bodies into tackling dummies and doing agility drills to work up a sweat.

Defensive line coach Aaron Wallace wears protective gear to sustain the hand blows to his stomach and shoulders as young athletes sprint around bags and race toward him. All the action is taking place at the gym Wallace and NFL veteran Marcus Smith II opened on May 22 in Upper Marlboro, Maryland — a gym that focuses on strengthening the mind and soul, as well as the body, for those who play football.

“Today we are A&M Sports and Fitness where success starts in the AM,” said Smith, who used the initials of his and Wallace’s first names for their new venture. Smith told those gathered at the ribbon cutting that he got the idea from Wallace, his brother-in-law: “It started with Aaron training me when I played for the NFL. Aaron had a passion for training D-linemen and outside linebackers.”

In addition to training athletes, Smith said, their facility offers another component.

“l don’t just want to instill sports into your kid, but also the mental wellness part. That involves goal-setting and helping them with anxiety and depression that all of us deal with,” Smith said.

But Smith, a native of Columbus, Georgia, eventually got his life together. He and his wife and their two children live in Maryland, and in 2018, he and Wallace started training linemen. Now they work with kids as young as 8 as well as with potential NFL draftees.

Starting with a prayer

About 40 young men and women attended on opening day. Before the ribbon was cut, Wallace’s mother, Linda Wallace, a minister, offered a prayer: “Lord, give them the vision of innovative ideas that will take them to the next level. We give you the glory and honor for all they are doing in their lives.”

“Aaron and Marcus lived through the mental pressure of going through college, and they know first-hand about the mental capacity needed,” the Rev. Wallace said. “What they did was come together to build a brand and market their business and mentor these young black guys into leadership.”

Wallace, a former defensive lineman at North Carolina Central University, said college and high school coaches don’t have time to break down every move needed to play football, and that is where he and the others comes in.

“We focus on small things in detail,” he said. “I like to focus on each rep, break it down and tell them what they are doing wrong.”

Geovonie Irvine first met Wallace when they played football together at North Carolina Central.  Now the two are back together working in Maryland.

In addition to strength and conditioning, and mental health counseling, A&M does life coaching,” said Irvine, who was the second-leading wide receiver in NCCU history with 171 catches for 2,322 yards and 16 touchdowns. He went to an NFL Combine but wasn’t drafted.

“We just don’t want life to be about football because once football is over, some kids will crash out and some have killed themselves because they don’t think about other things,” he said. “That’s why we have career counseling.”

Phillip Reynolds, a mental health counselor for more than 15 years, works at the gym on “all the things that are off the field, all the things you see at a higher level, when they get in trouble with the team, the league and the schools because their minds are not right.”

As far as working with linemen, Reynolds said, “With the big boys it is even more important because off the field they see all of that size. If they lose their cool at that size, it is an entirely different scenario. You can be a gentle giant off the field but channel their aggressions on the field.”

The gym also offers Zumba sessions for all members, with instructor Nicole Littlejohn.

“Mental health is important for everybody, men and women alike, because many people don’t like to talk about it,” she said.

In addition to the workout facilities, the center houses a sanctuary for Way of the Word Ministries, led by pastor Edward Holloway, along with ministers Wallace and Cornelius Rouse.

“This program is giving these young men structure because right now a lot of recreation centers are closed [due to COVID-19 restrictions],” said Holloway. “It teaches them character and how to schedule their time. In times like these, this place is vital and shows there are places where people care about your mind, body and spirit.”

Cornelius Rouse, A&M’s chief operating officer, said that when he and his friends played football in high school, they often got into trouble because they didn’t have father figures in their lives to help build them up.

“I understand the mental health burden that our young black men often go through when their athleticism is realized,” Rouse said. “Often the environment can be extremely toxic. They stripped you naked of everything you were before in hopes of bringing them success and financial stability through football.”

After high school Rouse joined the Army and served two tours in Iraq. He later suffered from post-traumatic stress disorder and Reynolds became his counselor. “I hit rock bottom. I was on a couch one day with a bottle of vodka and a shotgun,“ said Rouse.

“At A&M,” he said, “we want to remove that pressure for young men to develop them holistically.”