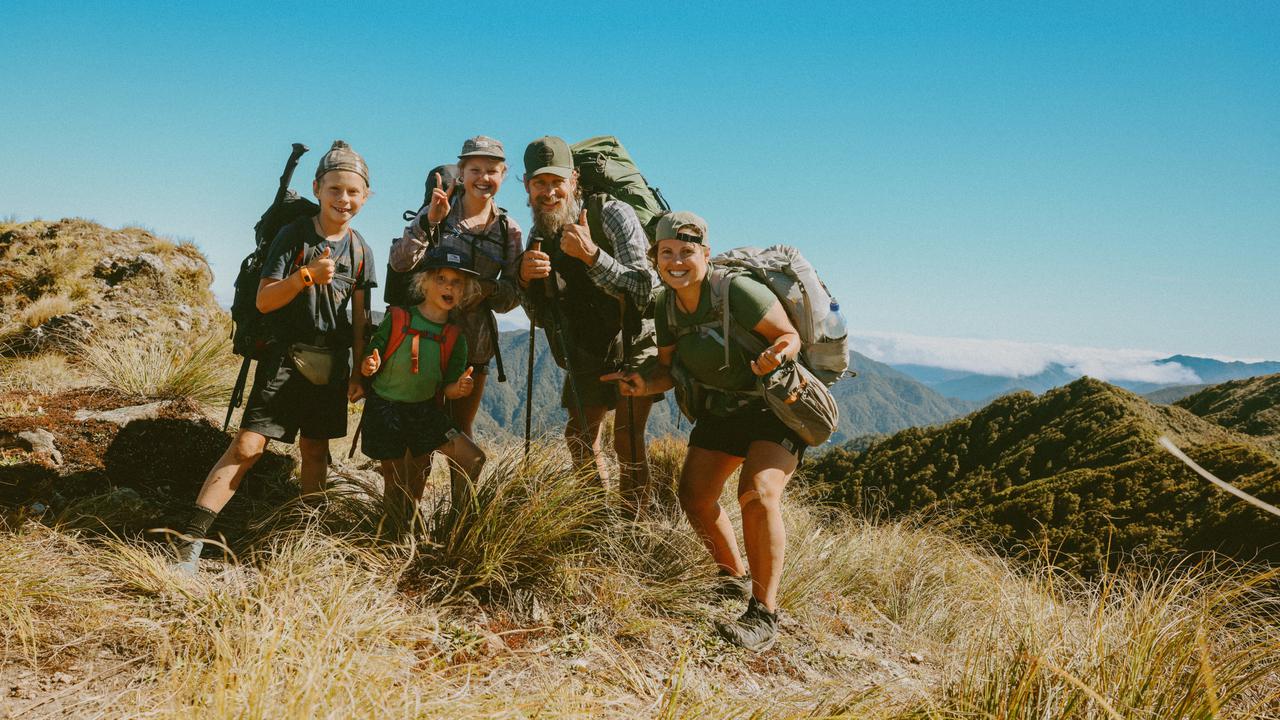 SYDNEY — In lockdown last year, the Gerlach family from Australia dreamed of an almighty adventure.

The Sydney family, which started when Tom and Deanna met working on the Harbour BridgeClimb, had already decided to move to New Zealand, where Deanna grew up, at the end of the year.

During the pandemic, they found themselves spending more and more time in the bush of nearby Ku-ring-gai Chase National Park.

That’s when they began plotting the trip of a lifetime, deciding to walk the length of New Zealand from tip to tail, a 3000km odyssey known as “Te Araroa”.

Last week, some 177 days after they left the northernmost tip of North Island, Cape Reinga, in beautiful sunshine, they trudged into Bluff at the base of South Island, amid dreary hail.

“It was absolutely a lockdown dream,” Tom said.

“We were equal parts nervous and excited. Everyone thought we were crazy … but we wanted an adventure,” Deanna said.

Te Araroa — which means “the long path” in te reo Maori — is tackled by hundreds of hardy trampers, typically young backpackers, each year.

What sets the Gerlachs apart is they were joined by their three enthusiastic, adventurous children; Juno, 12, Joplin, 10, and Goldie, who began the hike aged five and turned six on the way.

Goldie is believed to be the youngest ever to successfully tackle Te Araroa.

“Dee and I were very pragmatic about the fact that we probably wouldn’t actually make it. We didn’t have any ego about not finishing,” Tom said.

“We knew Goldie was a pretty robust, resilient middle five-year-old. We saw how capable she was in the outdoors, walking and climbing. We thought she could do it.

“It wasn’t until we popped out at Waiau Pass (in South Island, some four months into the walk), we were like ‘well okay we can actually do this. We can get there’.”

From the picturesque beaches of Ninety Mile Beach in the far north, to South Island’s snow-capped mountains, the Gerlachs saw Aotearoa’s greatest hits across their six-month walk.

They cycled the Timber Trail, canoed the Whanganui River and scrambled across the volcanic rock of Tongariro.

“We had lots of icy mornings. When we walked through from Glenorchy to Magora Lakes, got down to at least minus two overnight so we walked past frozen puddles,” Deanna said.

“There were days where that were pretty hairy and a couple of occasions where we had to ask ourselves ‘shit, are we doing the right thing?’,” Tom said.

“But we were well planned and very cautious around dangerous sections. In any sort of inclement weather we would sit out a day or two and wait.”

The path also intersects with many towns and cities — the main thoroughfares of Auckland and Wellington are on the route — allowing chances to stock up on supplies and rest.

“We walked into a town called Mangawhai, on December, 23, where Dee’s eldest brother and his wife go every year for Christmas,” Tom said.

“So we ended up having a big family Christmas as you normally would, there just weren’t presents under the tree and we were just a bit stinky.”

They spent Easter in the Waiau Pass — one of the most stunning and also difficult parts of the trail — celebrating with an egg hunt.

And for Goldie’s sixth birthday, they climbed a mountain in the Richmond Ranges to take in the sunrise, eating cake gifted by a “trail angel” — locals who help walkers with food, a bed, or advice as they tackle the trip.

“So many people we met along the way were so awesome,” Deanna said.

Te Araroa executive director Mark Weatherall said the family showed the walk could be done by anyone with the right mindset, gear, and preparation.

“I’ve worked closely with the family and they’re really safety conscious. What they’ve done is incredible,” he said.

“Some people say ‘oh why would you take them out of school’ or ‘they’re too young’ but they would have learned so much about themselves.”

Juno, the eldest child, said she found bravery and confidence.

“I started off as a girl who was afraid of almost everything. I feel like I now know myself, my country, what I want to stand for and who I am,” she said.

Deanna said she saw new-found resilience in her children, who all gave their consent to the mighty mission.

“We’ve seen them grow immensely over the last six months,” she said.

As is common, they skipped some roadside sections, while promising to return and chalk off other days where flooding or weather stopped their efforts.

Tom said the family has pledged to help others keen to tackle New Zealand’s great adventure.

“We will be paying it forward,” he said.

“The hospitality and the care and the love and generosity received from other people was incredible. We will ensure that’s a huge part of our life moving forward.”