The Red Cross In Mexico: More Than A Century Of Ongoing Aid 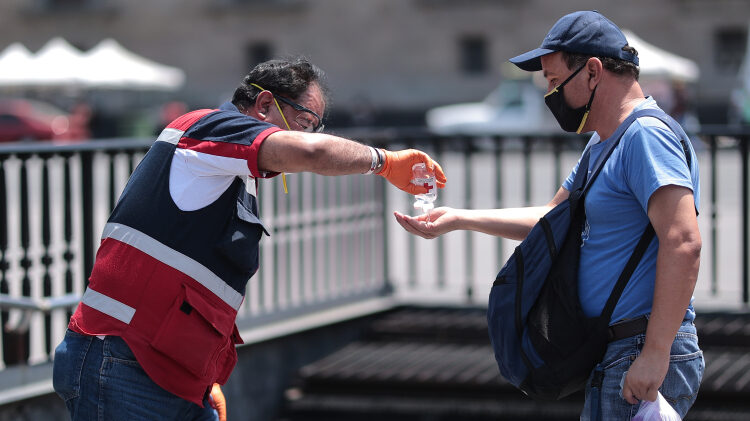 The Mexican Red Cross has participated in the dissemination of information and sanitary campaigns during the COVID-19 pandemic. (Hector Vivas/Getty Images)

The Red Cross is one of the world’s best-known humanitarian organizations. Its symbol is a godsend for those seeking shelter and/or medical assistance just about anywhere around the globe.

In Mexico, more than a century after its arrival in the country, the Red Cross continues its endeavors, as strong as ever.

The organization’s primary goal is to help the at-risk populations concerning their health. It also offers humanitarian relief during disasters, including search and rescue, and delivers supplies, such as food and clothes.

Among those who feel indebted to the Red Cross are the people of the Mexican states of Tabasco and Chiapas.

“The Red Cross helped both of those states during their worst flood, back in 2007. This brutal disaster has sequels still felt to this day,” said Ricardo Cañas Montalvo, a graduate in Historiography and historian working in the city of Veracruz.

Two years later, the Red Cross’ Mexican branch again gained international recognition due to its work during the H1N1 pandemic, delivering over 2 million face masks, hand sanitizer, and applying Tamiflu, the only medicine that controlled the then-new influenza strain.

Similarly, during the past year or so, Mexican Red Cross has participated in the dissemination of information and sanitary campaigns during the COVID-19 pandemic.

“No matter which disaster of the last century we review, the Red Cross has helped through the worst moments of Mexico’s history. While no institution is completely clear of criticism, Mexico has always had their support when we’ve needed it,” said Cañas Montalvo.

It all started when Mexico signed the Geneva Convention in 1907, which established a Red Cross branch in the country. Two years later, the organization offered its first major assistance in the country, helping during Monterrey’s 1909 flood.

In subsequent decades, the Red Cross played a fundamental role assisting in the aftermath of many natural disasters. For example, in 1943, during the eruption and birth of the Paricutín volcano, the organization was in charge of evacuating and providing supplies to thousands of victims.

“Another disaster where the Red Cross lent its assistance was after the devastating earthquake that hit Mexico City in September 1985,” said Cañas Montalvo. “The organization sent paramedic and search parties who were fully committed to the cause.”

The Red Cross has also played a role in many of the nation’s most important man-made events.

For instance, in 1920, when President Venustiano Carranza was assassinated, the Red Cross lent a train with its symbol on it to keep his body from being stolen or damaged during its transport to his funeral, said Cañas Montalvo.

In 1992, the Red Cross was there to help when the city of Guadalajara suffered from several gasoline explosions in its sewer system that destroyed over 5 miles of streets.

Then, during the mid-1990s, the organization played a fundamental role in granting medical aid to the victims of the Zapatista Movement of Chiapas. Furthermore, it organized the peace talks between the government and the insurgents, thanks to its reputation as a trustworthy and neutral organization.

“The Red Cross has always been there during Mexico’s most-needed times,” said the historian.