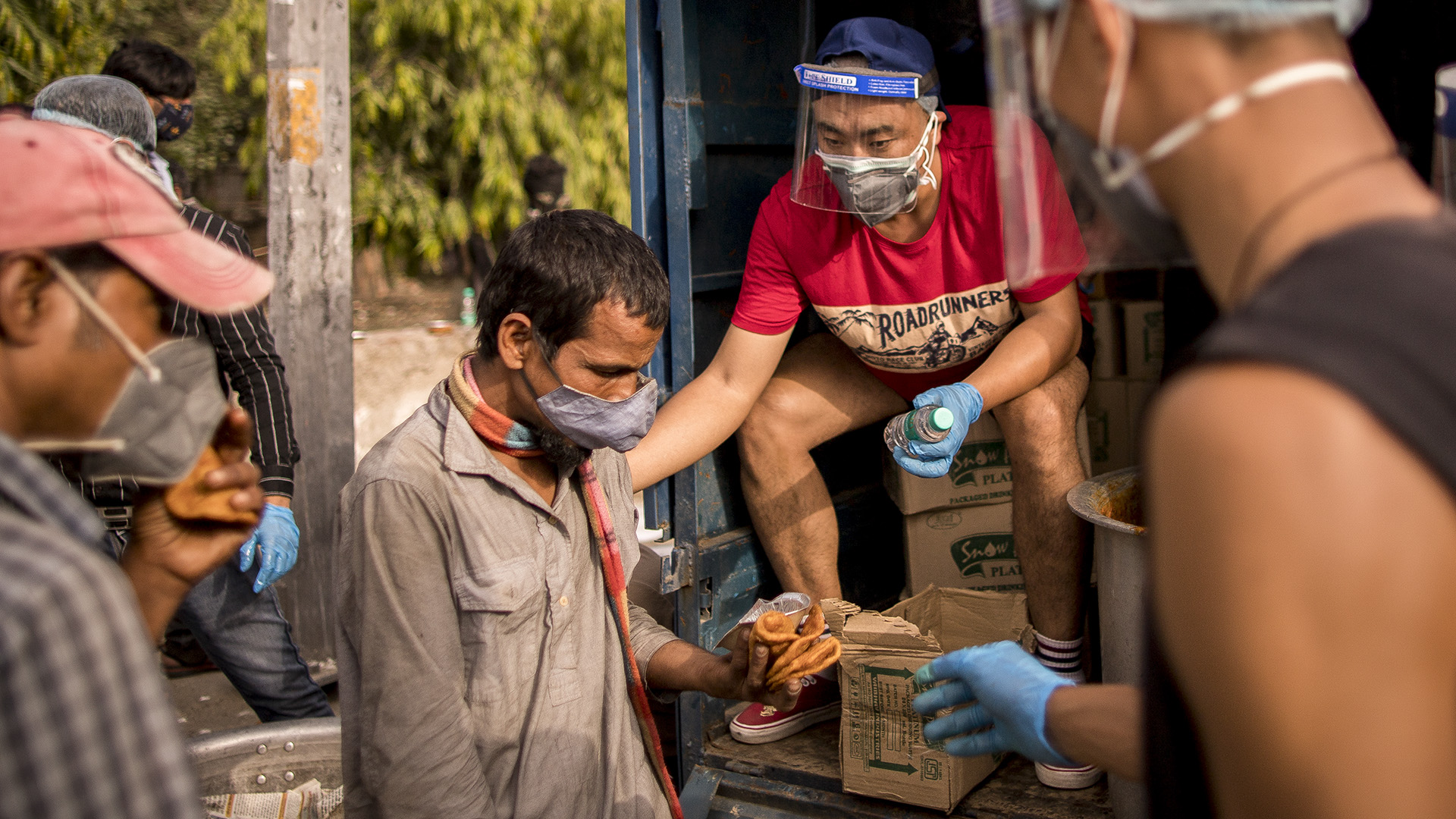 Volunteers distribute food to the homeless who were working as rickshaw-pullers and daily wage laborers and are out of jobs after the lockdown announced by the Delhi government to curb the spread of Covid-19 coronavirus contagion. (Anindito Mukherjee/Getty Images)

The health machinery was on the verge of a collapse, and social media platforms were filled with SOS messages regarding oxygen cylinders and hospital beds.

By May 19, however, the positivity rate fell below 6 percent — its lowest since April 5 — bringing a much-needed respite to the gasping city.

“If I talk about the positivity rate from the last 24 hours, it is now below even 2.5 percent,” Delhi Chief Minister Arvind Kejriwal said on May 23.

But even as the number of active Covid-19 cases is declining, new crises have surfaced. 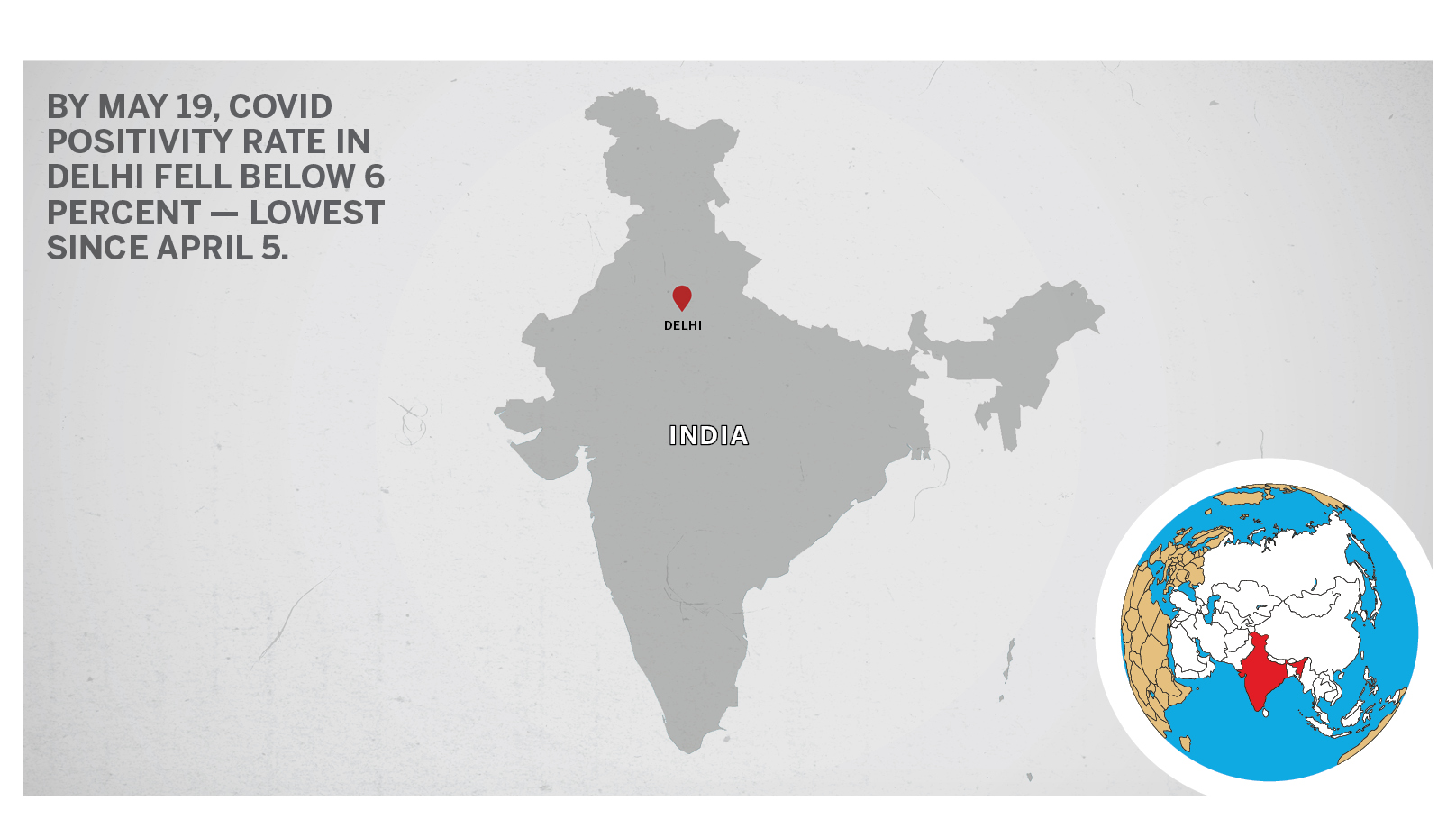 Gopika Pokhriyal, who stays in south Delhi’s posh locality Chittaranjan Park, says that despite keeping Covid-19 waste separately, they had to dispose them of with common household waste.

“When my mother and I tested positive, we were worried about the masks, discarded medicines, syringes, and the used gloves, as they might act as carriers of the virus,” Pokhriyal told Zenger News.

“So, we collected them separately. But after waiting for four days, we had to dispose them of with the solid waste.”

When Covid-19 cases started rising in the country during March 2020, the country’s Central Pollution Control Board came up with specific guidelines on handling related bio-medical waste. The guidelines were revised subsequently.

It recommended yellow-colored, double-layered bags to be used for the collection of waste from Covid-19 facilities, including home care units.

The Central Pollution Control Board website clearly mentions that urban local bodies should ensure strict implementation of guidelines issued by them. When contacted, a south Delhi municipal corporation official said rules were being followed.

It said bins should be marked “Covid-19 waste” and handled by authorized staff of the Common Bio-medical Waste Treatment and Disposal Facility. The facility imparts necessary treatment to reduce the adverse effects of bio-medical waste on human health and the environment.

The recommendations also state that the persons collecting such waste should wear PPE (personal protective equipment) kits, and the vehicles should be disinfected with 1 percent sodium hypochlorite solution daily.

But the situation on the ground is different.

“There was no such arrangement from the authorities for home collections,” Pokhriyal said. She also said that although the Delhi government’s Covid-19 war room authorities called every day to check their well-being, “no guidelines regarding waste disposal were provided”.

The capital city’s amount of Covid-19 waste has increased significantly in the past two months. When the number of coronavirus cases started increasing during the end of April, the national capital was producing 12.5-13 metric tons of bio-medical waste, which rose to about 18.8 metric tons per day till May 10.

According to the latest data published by the Central Pollution Control Board, the bio-medical waste produced by the country every day is 139 metric tons.

A study published in the American Chemical Society, 85 percent of bio-medical waste is non-hazardous.

But the rest includes potentially infectious waste and poses a serious risk to workers or handlers; thus, it requires proper management. And, Covid-19 waste is categorized as hazardous bio-medical waste.

“Any waste coming out of the houses of Covid-19 positive patients is bound to be infectious, and if municipal workers are collecting without following protocols, they are putting themselves at risk of getting infected,” Satish Sinha, assistant director, Toxic Links NGO, told Zenger News.

During the first wave of coronavirus, Sinha says Toxic Links had suggested the government to have an arrangement where all Covid-19 waste from home care facilities could reach facilities where the bio-medical waste is treated.

“That didn’t happen even during the second wave, and now this hazardous waste is reaching dumping grounds without proper treatment is becoming a matter of concern,” Sinha said.

Tamanna Sharma, director, Earthling First, believes that another problem is the huge number of informal waste pickers and no proper policy to safeguard them.

“Informal waste pickers, who collect waste from households, will put their hands inside the garbage to take out recyclables as they provide them livelihood,” Sharma told Zenger News.

“If the waste is not segregated, they are bound to get infected.”

What are others doing?

In Mumbai, the state government allowed SMS Envoclean Pvt. Ltd., which collects waste from all registered medical facilities in Mumbai and incinerates them, to handle the bio-medical waste.

However, as the amount of waste collected during the Covid-19 crisis increased to 22-23 metric tons, the plant reached its capacity.

Although the Brihanmumbai Municipal Corporation had released the guidelines of segregating waste and keeping it in separate color-coded bags, there are doubts over its implementation, especially from home care facilities.

“After this, the team used to hand it over to the SMS Envoclean,” Torne said. “The civic authorities ensured every possible measure to separate bio-medical and solid waste so that the decomposition happens separately.”

In the United States, medical institutions have incinerators installed where the bio-medical is readily processed. However, as environmental pollution increased, close to 1,500 medical facilities started using autoclaving or microwave technology to minimize the impact on the environment.

According to a study, Wuhan, where the Covid-19 first surfaced, generated six-times more bio-medical waste than pre-Covid times.

“To minimize the risk of infection, bigger space in the outer area of hospitals [in China] has been temporarily allotted for the storage, disinfectant spraying, and their smooth transportation to the treatment facility,” it states.

It also states that China planned that every prefecture-level city should have a centralized medical waste treatment facility by the end of 2020.

There is also the danger of vector-borne diseases, given the showers that are hitting the national capital.

As Cyclone Tauktae caused a sudden turnaround in the weather of Delhi, which is recorded an average of 60 millimeters rainfall, the highest since May 24, 1976, the fear of the spread of diseases like dengue, malaria, chikungunya, and diarrhea, has risen.

It is known that Aedes mosquito bites cause dengue, but a study has now predicted that tap water access in high population density areas may also lead to its spread.

As almost all health facilities in the national capital are dedicated to Covid-19 patients, the increase in vector-borne diseases can lead to extra stress on the healthcare infrastructure.

Rajiv Magon, a Lucknow-based general physician, believes the combination of Covid-19 and other vector-borne diseases can be fatal.

“It’s like an attack on a country from two sides. The army will get confused about where to go,” Magon told Zenger News.

“Similar is the situation here, the immunity system will get confused about what to treat first, and it can even turn out to be fatal.”

He believes that a person can easily differentiate between Covid and other vector-borne diseases with a little precaution.

Magon also says there are medicines to treat dengue now.

In the past, the Delhi administration has worked to bring down cases of vector-borne diseases. However, this year, with the added effects of Covid-19, it will be a tough battle for the people of Delhi.

L.R. Verma, an additional municipal health officer working with the Municipal Corporation of Delhi, says that the situation is not drastic enough for special efforts.

“However, as the rainy season has started, we are passing messages to people to not let water stagnate,” Verma told Zenger News.

“We need to understand that the mosquito causing dengue collects in freshwater. Every year we spread this message. Nothing special apart from this is currently being done.”

The data regarding vector-borne diseases shows that the effect of different diseases varies across states.

The city is also amid a water tussle with the neighboring northern state of Haryana, raising fears of water shortage amid a raging pandemic.

“The Supreme Court of India has fixed the quality and quantity of water that the government of Haryana is obliged to supply to Delhi,” Raghav Chadha, vice-chairman, Delhi Jal Board, said. “The government is not honoring their legal commitments.”

But Raman Malik, an opposition political party member from Haryana, told Zenger news that the state was doing its best “to take care of Delhi, and it has been supplying enough water.”

The Delhi Jal Board officials complained that the water they were receiving from Haryana had high levels of ammonia — 3PPM (parts per million), against the acceptable limit of 0.5PPM.

This has resulted in the shutdown of water treatment plants as their treatment capacity is only up to 1PPM.

“The effects [of high ammonia level] on health are long term as the impact on liver, kidney or brain could be life-threatening,” Magon said.