The actress recently wrote and starred in a virtual comic monologue filmed at an LA theater.
By Julio Martínez May 21, 2021
Facebook
Twitter
Linkedin
Email 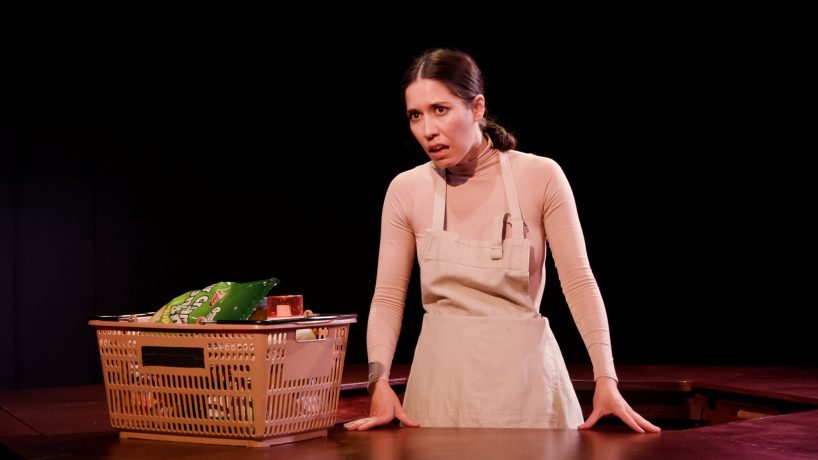 Sheila Carrasco wrote and performed in “Anyone But Me” (L.A.’s Pico Playhouse)

Written by Joe Port and Joe Wiseman for Lionsgate Television, BBC Studios and CBS Studios, “Ghosts” follows a struggling young couple, Samantha (McIver) and Jay (Ambudkar). Their dreams come true when they inherit a beautiful country house, only to find it’s both falling apart and inhabited by many of its deceased residents.

“Rose and Utkarsh play an energetic, positive couple whom you really want to root for, and I play one of the deceased permanent residents,” Carrasco said.

The show is based on a popular BBC series now airing in England.

“When I first read for the script, I started watching the British series, and I fell in love with it. All the ghosts died on the property in the last thousand years. It has a really fun ‘Bill and Ted’ meets ‘Beetlejuice’ vibe.”

Carrasco plays Flower, a 1960s flower child who died on the property while attending a music festival. “She wandered around … tripping on acid, and was attacked by a bear she was trying to befriend.”

“They are tremendous comedic actors, and yes, they are the other ghosts,” Carrasco said. “Another of the series regulars, Román, is Latino. His mother is Taiwanese-American. His father is a mix of Mexican-American and Native American (from the Teema tribe). He plays a Native American character from the 16th century, which is really cool.”

The studio gave the green light to “Ghosts” last February, but its production began in December, due to the pandemic.

“We have to shoot the rest of the season. We still have to find out when we’re shooting, where we’re shooting, and how many episodes. I am thinking it will premiere in October, but I am guessing,” said Carrasco. “It is all TBD. The only thing I am sure about is my costume. All the ghosts are in the attire they were wearing when they died.”

While Carrasco is waiting to get in front of the camera, she is determined to write a new play.

“I don’t think this will be a solo show. I actually want to write a large Latino ensemble, kitchen-sink kind of play. I don’t believe we have enough of those. I want to write my version of it. And, of course, I want to write for television. I’ve always enjoyed writing TV scripts and pilots. I want to take advantage of every opportunity.”

Recently, Carrasco wrote and performed in her virtual solo comedy, “Anyone but Me.” Filmed live at L.A.’s Pico Playhouse, “Anyone but Me” was directed by Margaux Susi.

“The play deals with eight different women. They’re based on ladies I’ve known, and there’s a little of me in each of the characters,” Carrasco said. “‘Anyone But Me’ explores all my different alter egos and the insecurities I’ve had in my life.”

Half Chilean — from the Mapuche tribe — Carrasco is originally from the South Side of Chicago and an alumna of New York University. She was selected to perform as one of CBS’ “Just For Laughs New Faces of Comedy” — as both a performer and head writer.

On TV, she shared the screen with Tim Robinson in “I Think You Should Leave.” She also appeared in “The Good Place,” “Jane the Virgin,” “Outmatched,” “The Odd Couple,” “Life in Pieces,” “American Housewife” and “#VanLife.”