Popcorn With Zenger: Chris Rock Is Miscast In An Insanely Predictable ‘Spiral’

“Saw” spinoff is a bland franchise reboot as uninteresting as it is unsurprising. 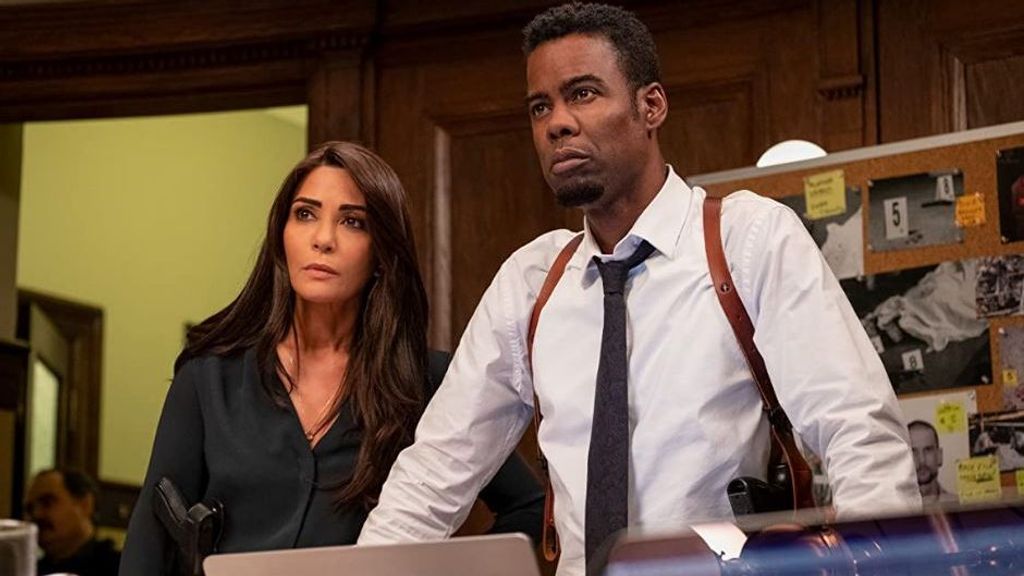 Comedian Chris Rock stars in the horror film, “Spiral: From the Book of Saw.” (Courtesy of Lionsgate)

Time isn’t always on your side.

There has been a lot of intrigue in the last couple of years for the “Saw” spinoff film “Spiral.” The “Saw” franchise has spawned eight films in the last 15 years, and just when it seemed the series had run out of steam, Lionsgate decided to move forward with a new installment. What made this decision so interesting (or puzzling, depending on your perspective) was putting famed comedian Chris Rock in the lead role of a horror film.

It isn’t often that Rock takes a role outside his comedic niche, so when he wanted to branch out into horror, many wanted to see if it was a misstep or a new career route. Due to the COVID-19 pandemic, audiences had to wait a full year past the planned release date of May 2020 to get an answer to that question. After finally seeing “Spiral,” audiences likely won’t be looking for more of Chris Rock or the “Saw” franchise in the future.

The Story: “Spiral” begins in New York City, during a Fourth of July parade, where an off-duty cop, Detective Marv “Bo”’ Boswick (Dan Petronijevic), chases down a thief after a robbery. The chase leads him to the subway system when he is fatally attacked from behind by a figure wearing a pig mask.

The next day, Detective Ezekiel “Zeke” Banks (Rock) is assigned a new partner, rookie cop William Schenk (Max Minghella), to lead the case. The duo investigates Boswick’s murder and Banks realizes it is likely the work of a copycat of the “Saw” movies’ deceased Jigsaw Killer.

The deeper into the case he gets, the more Banks realizes how close to him the murderer is. The new serial killer has his eyes set on corrupt members of the New York Police Department and will stop at nothing to pick them apart one by one.

Bright Spots: The positives of this film are few and far between. One of the best things “Spiral” has going for it is a decent supporting cast. All the actors are veterans who give good performances, but their roles are fairly limited.

The traps created in the film are solid for a “Saw” franchise film, but they don’t happen very often, which could be a negative or a positive, depending on how important the torture element is to the viewer.

Weak Spots: Within minutes, “Spiral” unleashes tidal wave of conflicting themes that even seasoned moviegoers will have a tough time digesting. It opens with the textbook “Saw” setup of “wanting to play a game” then transitions into Rock doing a comedy routine between the sounds of rap music, only to drop audiences back into the story expecting them to take Rock seriously as a hard-nosed, by-the-book cop.

“Saw” movies thrive on being able to keep audiences guessing until the very end. Not being able to tell who the killer is and how he gets away with setting up the traps is a large part of the draw. “Spiral” is so by-the-numbers that anyone with average intelligence will guess the killer within the first 30 minutes. The only surprise here is being shocked at figuring out the entire plot of the film about an hour before everything is revealed.

Along with being painfully predictable, the plot relies on trained police officers doing things that they would simply never do. The combined weight of inconsistency and predictability turns a huge opportunity into a failure to truly reboot a long-standing film series.

The Takeaway: “Spiral” was supposed to be the jolt to shock life back into a dying franchise. In the end, it only strengthens a lack of faith in Hollywood’s ability to recreate cunning and original entertainment in the modern era.

See or Skip: If you’re already tapped out by the repetitiveness of the “Saw” franchise, prepare to have your limbs broken with “Spiral.” It’s the franchise that doesn’t know the meaning of “give up.”