The kids' movements were embedded in soft mud and remained untouched.
By Peter Barker May 21, 2021
Facebook
Twitter
Linkedin
Email 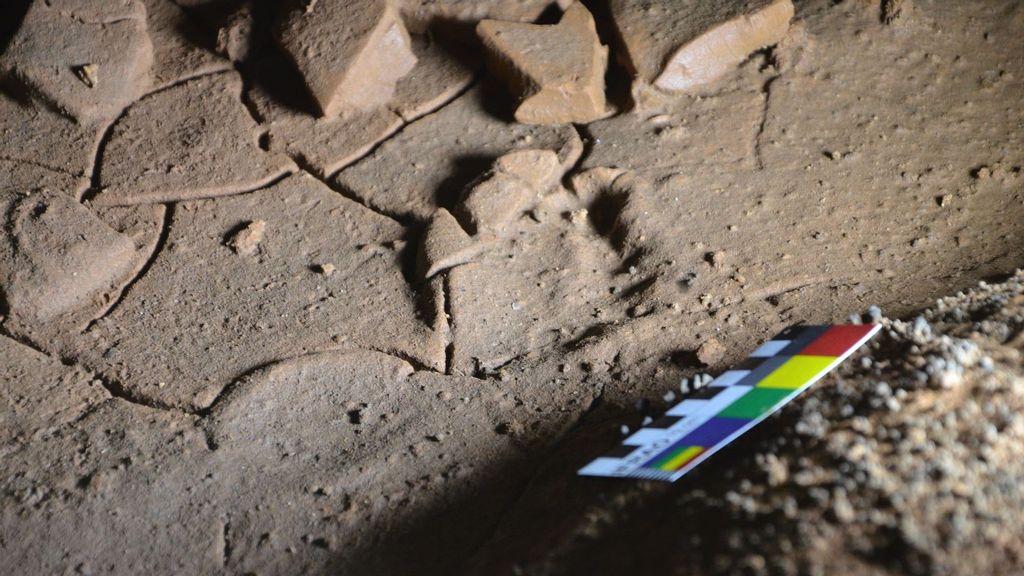 One of the two dozen 16,500-year-old footprints found in the La Garma cave in Cantabria, Spain. (Pablo Arias/Zenger News)

When a small group of children ran through the mud of this prehistoric cave, they left behind footprints that remained almost unchanged in the soft ground — until they were discovered recently, an incredible 16,500 years later.

Some two dozen human footprints from the Paleolithic period made by the children have been discovered in the UNESCO World Heritage Site cave.

The discovery was made by researchers from the University of Cantabria, the International Institute for Prehistoric Research of Cantabria and the Cantabria prehistory archaeology museum (MUPAC) at the La Garma cave complex in the northern Spanish province of Cantabria on April 9.

Pablo Arias, professor of prehistoric archaeology at the University of Cantabria, who has spent over two decades working on the La Garma cave complex, described the discovery as “extraordinary.”

The research team uncovered 14 footprints they think were left behind by children between the ages of six and seven, possibly while playing in the cave.

Arias said such footprints are a rare discovery — the only comparable example being the prints found in Tuc d’Audoubert cave in the French Pyrenees.

The footprints in the picture are in very good condition, which Arias attributes to the climate in the caves.

“The footprints were found in an isolated part of the cave where the temperature remains incredibly stable, only varying by one or two degrees between summer and winter,” he said. “Further, due to their isolation from the outside world, they have been protected from animals and as a result, they have kept their shape.”

Arias said that despite their impressive condition, the prints are delicate and require extreme care when being examined.

“The footprints, despite being 16,500 years old, are still ‘fresh,’ and as a result could be destroyed by someone simply stepping on them.”

The isolated location of the footprints has protected them for thousands of years, but also made them hard for the researchers to access.

Arias said the footprints were located 82 feet above the cave’s lower gallery, which the researchers accessed through an entrance between 10 and 19 feet wide.

The gallery was labeled Zone VII and upon entering, the team, led by Roberto Ontanon from MUPAC, found a clay floor with several footprints. The team confirmed there were 14 footprints measuring 7 inches from toe to heel, along with several other prints left behind solely by a heel. Others are believed to be prints from elbows.

“The La Garma cave system is one of the most important sites in the world for the knowledge of human behavior in the Paleolithic period,” Pablo Zuloaga, vice president of the government of Cantabria, stated.

Arias said: “There is nowhere else in the world with the quality and variety of remains that we have in La Garma, which is sure to continue providing us with archaeological surprises in the future.”

He said that much is still unclear about the discovery, such as how many children left the prints and what exactly they were doing in the cave. One theory is the child or group of children were playing in the cave when they made the prints.

More research is needed before a clearer picture of what was going on in the cave 16,500-years-ago can be established.

The research teams will use laser scanners, photogrammetry and high-resolution photography to build a more detailed understanding of the prints and the children who made them.