He took office in 2019 and since then has drastically changed the country’s political life.
By Felipe Torres Gianvittorio May 21, 2021
Facebook
Twitter
Linkedin
Email 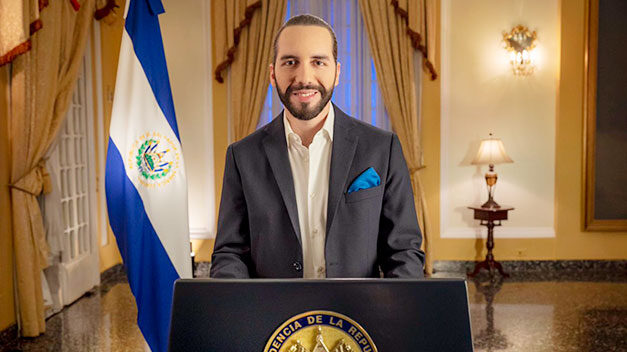 Nayib Bukele began his career at the FMLN and was San Salvador’s Mayor between 2015 and 2018. Later, he left the party and sought the presidency on his own. (Fsociety/Creative Commons)

El Salvador’s President Nayib Bukele “has many similarities with [Hugo] Chávez. I think that is a warning that we must bear in mind,” said José Miguel Vivanco, Executive Director for the Americas Division at Human Rights Watch, in an interview last April.

Days later, the world’s attention was on El Salvador.

Back in March, Nayib Bukele’s party, Nuevas Ideas (New Ideas), claimed a historic result in the legislative elections. The party secured an absolute majority in the Assembly, something unprecedented in Salvadoran politics.

The event gave rise to speculations that Bukele, who took office in 2019, could govern with absolute power. The traditional parties, FMLN [Farabundo Martí National Liberation Front, left] and Arena [Nationalist Republican Alliance, right], were practically wiped off the map.

The elections’ result consolidated the swift rise of the Salvadoran president. He began his career at the FMLN and was San Salvador’s Mayor between 2015 and 2018. Later, he left the party and sought the presidency on his own.

“Second, he knows how to profit from the deep disenchantment that 25 years of traditional party governments left in the population. He presents himself as the alternative, and people are so disappointed by the parties that they end up buying his rhetoric.”

Finally, Cruz said, “he began using government resources (to the point of extreme indebtedness) to set up social assistance programs amid the pandemic.”

“The parties have been unable to address [social violence] issues successfully,” said Tiziano Breda, the Central America analyst at International Crisis Group. “Also, members in the highest ranks have been involved in corruption scandals. Three of the last four presidents have been investigated and/or convicted of corruption issues worth hundreds of millions of dollars.”

With Bukele’s blessing, the new Assembly convened on Saturday, May 1. Its first resolution dismissed the regular and alternate justices of the Supreme Court’s Constitutional Chamber.

Vivanco was already following the issue back in April 2020, and he tweeted: “Nayib Bukele uses COVID-19 to weaken the Supreme Court — the main check on his abuses. To protect Salvadorans, Luis Almagro [Secretary General of the Organization of American States] must declare that guarantees of rights and democratic institutions continue in place, even amid the pandemic.”

Vivanco and Bukele have been publicly fighting ever since.

At the beginning of the pandemic, the Constitutional Chamber blocked some actions taken by Bukele to deal with the health emergency.

The Official Gazette published executive decrees instating a quarantine and temporarily curtailing constitutional guarantees of citizens’ rights, but on June 8, the Chamber ruled that the laws were themselves unconstitutional, as they violated fundamental rights.

Bukele said the Chamber had “taken away his powers to fight the pandemic.”

A few hours after the Assembly convened, it approved by an absolute majority the removal of Attorney General Raúl Melara. The opposition criticized the measures, calling them a “coup,” and international organizations considered that “the rule of law had been broken.”

After these movements, Bukele indirectly controls the three branches of government, but he does it without a clear ideology.

Bukele “presents himself as a center candidate, free from ideologies. … He resorts to progressive social policies, which could be associated with left-wing issues. But also leans toward a free-market ideology, aligning to the relevance of private companies, which perhaps could be more akin to those on the right,” Breda said.

“In front of progressive audiences (university students, trade unionists), he has left-wing rhetoric, denouncing big capital and the rich. But, in front of conservative businessmen and think tanks in Washington, he favors private initiative and defends the traditional family,” said Cruz.

“The sensible thing is to see Bukele as the classic authoritarian populist leader, whose only constant is promoting himself as the chosen one to save the country (and now Central America),” he said.

However, Bukele might not keep high popularity ratings until the end of his term in 2024.

“In the medium and long terms, [these dismissals] will end up diminishing his political support, when the effects of the power consolidation turn against the people and when he cannot continue with his massive social assistance program,” said Cruz.

“Unlike Chávez in Venezuela, Bukele is not sitting on unlimited resources (at least while oil prices were in his side). On the contrary, El Salvador does not have its own resources beyond remittances. Besides, the country is so indebted that it is impossible to allocate much money to sustainable social programs,” said Cruz, who also says Bukele’s complex relationship with Washington will make it difficult for him to access loans from the IMF and other international organizations.

Breda worries about the future. “What is expected, unfortunately, is that Bukele will continue attempting to increase his control of the government branches, remove more uncomfortable officials, and increase the harassment and discredit of opponents, journalists and human rights defenders. He basically consolidates a very concentrated power in a government with quite an authoritarian shade.”

From Breda’s perspective, the international response will be critical to the future of Salvadoran politics. He remembered that Honduras and Nicaragua lived through similar experiences, where the “somewhat weak” international community position allowed for some leaders, such as Bukele, to overstep on democracy.