VIDEO: Comets Near And Far Found To Have The Same Atmospheric Heavy Metals

“Fossils" for astronomers provide clues on common elements throughout the cosmos.
By Joe Golder May 21, 2021
Facebook
Twitter
Linkedin
Email 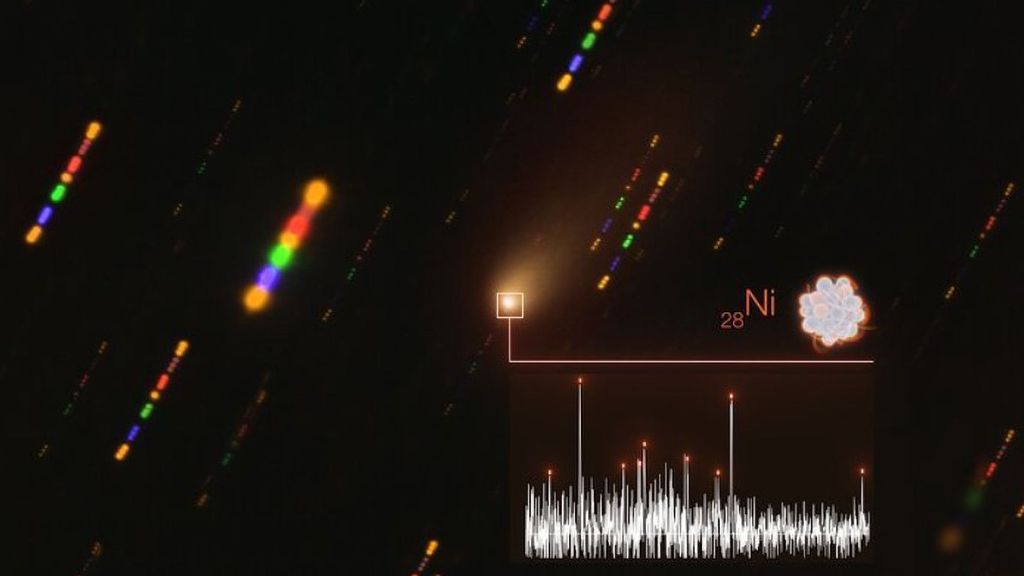 Spectrography was used to detect nickel in the atmosphere of interstellar comet 2I/Borisov. (ESO/Zenger News)

Scientists have discovered heavy metal vapors made up of iron and nickel in comets in our solar system and even further afield in interstellar space, meaning that objects in both may have more in common than previously thought.

While astronomers have long known that that comets contain significant quantities of heavy metals, the discovery was a surprise, according to the observatory: “Solid metals don’t usually ‘sublimate’ [become gaseous] at low temperatures, [so] they did not expect to find them in the atmospheres of cold comets that travel far from the sun.”

The Belgian study was a decades-long compositional survey of comets in our solar system, led by University of Liège astronomer Jean Manfroid. Using observations collected since 2002, Manfroid’s team concluded that nickel and iron “are ubiquitous in cometary atmospheres, even far from the sun.”

“Comets formed around 4.6 billion years ago, in the very young solar system and haven’t changed since that time. In that sense, they’re like fossils for astronomers,” said the study’s co-author, professor Emmanuel Jehin of the STAR Institute at the University of Liège.

Might these metals might be mined in the future, when technology has become advanced enough to do so?

“No, the quantities are extremely small; just 1 gram for 100 kilograms of water,” said Jehin. “For mining, asteroids are much better — they’re richer in metals of all kinds and much easier to land on.”

Despite studying these “fossil” objects with very large telescope for nearly 20 years, the Belgian team had not spotted the presence of nickel and iron in their atmospheres — until now. “This discovery went under the radar for many years,” Jehin said.

As for the specific methodology used by the Belgian team to detect the heavy metals, the observatory said it involved using data from the Ultraviolet and Visual Echelle Spectrograph on the Very Large Telescope, which analyzes the atmospheres of comets at different distances from the sun. That technique allows astronomers to decipher the chemical makeup of cosmic objects, as each chemical element leaves a unique signature — a set of lines — in the spectrum of the light from the objects.

The Polish team, meantime, used the telescope’s X-shooter spectrograph to detect gaseous nickel in the atmosphere of interstellar comet 2I/Borisov. (That comet is only the second body from interstellar space to be detected passing through our solar system; the first was the comet Oumuamua.)

“At first we had a hard time believing that atomic nickel could really be present in 2I/Borisov that far from the sun,” said the Polish study’s author, Piotr Guzik. “It took numerous tests and checks before we could finally convince ourselves.”

The observatory’s report expressed similar sentiments about the results of both studies.

“The findings are surprising because before these two studies [were] published, gases with heavy metal atoms had only been observed in hot environments, such as in the atmospheres of ultra-hot exoplanets or evaporating comets that passed too close to the sun. 2I/Borisov was observed when it was some 300 million kilometers away from the sun, or about twice the distance between the Earth and the sun.”

The observatory said that studying such interstellar bodies in detail “is fundamental to science because they carry invaluable information about the alien planetary systems they originate from.”

The long-term ramifications of such discoveries are potentially huge, scientists say.

“Imagine that our solar system’s comets have their true analogs in other planetary systems — how cool is that?” said Michal Drahus, a co-author of the Polish study.