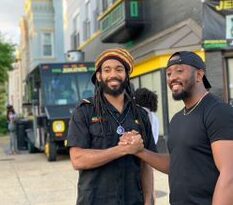 Denville Myrie Jr. (left), Founder of Jerk at Nite and Kadeem Todd, co-founder, shake hands in front of their truck and restaurant in Washington, D.C. (Courtesy of Kadeem Todd)

WASHINGTON — The Washington, D.C., area is home to a bustling population of food trucks. Streets surrounding the city’s monuments are often lined with stationary trucks vending shawarma, hot dogs and many other foods. Clearly, the competition for such vendors is intense.

Against that backdrop, Jerk At Nite began in 2013 with the experimental cooking of Denville Myrie Jr., a Jamaican student at Howard University admired by his peers for his cooking. Jerk At Nite initially seized the dearth of late-night food options in the years before meal delivery apps became popular. With the campus cafe closing at 10 p.m., there were only one or two restaurant options for late-night students.

Thus, the business was born, with Myrie Jr., Kadeem Todd and a few other Howard students operating a small enterprise serving their peers. In 2014, it grew to catering larger Howard events, getting their name out and growing their customer base of the future Howard alumni. In 2016, its food truck arrived on the scene. Then, in 2019, they started work on their first restaurant — but soon ran into a variety of obstacles in working to make that spot a reality.

Todd, one of the business’ five managers/owners recently took time out of his schedule to speak to Zenger News about the solid foundation that the business is built upon, and why they’re confident those hurdles will ultimately be overcome.

Zenger: How did this business begin?

Todd: Myrie used to always cook and stuff at night, and we all admired his food. During this time he got the idea of making Jamaican food. He had the idea of making it for years prior to that. Myrie had already graduated a year prior to me and started working for the Department of Health, a career he wasn’t really into, and I was fresh out of college trying to figure things out. I originally was an EMT, working in hospitals, but I wasn’t really into it, to be honest. So he came up with the idea: We’ve been doing this all these years, let’s put our money where our mouth is and invest in a food truck. At the time, food trucks were really big in D.C., and we definitely saw the opportunity of it being very lucrative because we’d see them every week downtown by all the monuments.

Zenger: Since there are a lot of food trucks in D.C., competition seems to be tight. How did you rise above that?

Todd: We kinda of came in struttin’. We came in like we had the best because we felt like we were the best. And we kinda promoted ourselves like that. Downtown D.C. business spaces are really mundane. People are walking to and from in their business suits, but we came through and cut through that with our own aura. So we would come in playing our music really loud, it was almost like the ice cream man concept, the people would hear it at 11 o’clock and we would get there before they even get out for their lunch break, we had the grill smoking and you could smell the food. You couldn’t walk past without wondering “what are they cooking?” and Jamaican culture is really worldwide; people love Jamaican food. People love it, and people who don’t love it have friends who love it who will take them there to try it.

It was easy to cut into the competition, as everyone [else] was selling tacos and burritos at the time. We always had the mindset that we wanted to be a business, not just like a hot dog stand. There’s nothing wrong with that, but we wanted to have a brand, so we always marketed ourselves that way. So with that game plan we found it easier to cut through the food truck competition. We found ourselves more in competition with other Jamaican restaurants in the area.

Zenger: You started getting noise complaints on social media. Why did that happen and how did you respond?

Todd: We had acquired our restaurant space in 2019, we had no outside funding, so we were using the food trucks to fund the buildout for the restaurant. We were pretty intentional about not having outside investors at that time. So with us finally building out the store, painting and remodeling it, we decided instead of moving around with the food trucks in downtown D.C., we planted our flag right here where our restaurant is coming, and we started parking on Eighth street.

So we would park both of our food trucks on Eighth street. Playing our music, curating a vibe, a culture to it — and people love it, our customers really love it. Because who doesn’t love good reggae music? It’s calming, it’s relaxing, you feel like the islands have been brought to you, so you feel like a happier mood and you’re engaging with the food or the people that’s around. Our neighbors on 11th and H weren’t too happy with that, but we were in complete compliance with the law, as far as that goes. We didn’t technically have to turn our music down to a certain decibel level until 10 o’clock.

We made sure to check in with everybody to maintain that so nobody would feel offended. I personally went door to door once we started cooking and working there to ease people’s minds about it. We were saying, hey, we’re not trying to disturb the neighborhood, we’re trying to be a part of this community, and we want to be on a good footing with everybody.

A post shared by JERK AT NITE Inc. (@jerkatnite)

But it didn’t quite go that way. There were a lot of deceptive smiles and yeses, but we found ourselves in a situation where the police were called numerous times about noise complaints, about us not being in compliance with our crowds. Which again, we were by the book every single time. But it was annoying that every time we had service police were called. We want to be a part of the community, but we didn’t know exactly who to communicate with to resolve this. People were kind of hiding from it, and they weren’t really with the energy we brought, I guess — because we weren’t the only restaurant who played music; there was another restaurant adjacent to us that also played music — but I guess because we didn’t have the same amount of traffic they felt they didn’t need to call the police on them, but they needed to call the police on us, so there was a bit of a bias there.

Zenger: What happened that caused you to stop work at the restaurant?

Todd: We invested a majority of our funds to build out our restaurant, and because of the police being called on us at the time, our landlord wasn’t really on our side because of — well, let’s just say he would have preferred to have other tenants. The value around that area had gone up since we had been there, and we locked in our lease in 2019, when there was nothing on that street. The street was in transition, and a lot of restaurants had closed prior to COVID-19. So we got a really good deal on the price of our location, but after us being there and other businesses opening around, the value had gone up around us, so our landlord at that point was trying to nitpick and find a way to get us out.

So we were in the last stages of building out the restaurant, installing the HVAC system. So with authorities constantly being called, we always had to pull out our paperwork. So this time they came and they wanted our permits for the HVAC system, even though they were called for a noise complaint. It turned out our landlord had not signed off on the permit, so he kind of derailed us. We technically weren’t in compliance then, so we ended up getting a stop work order from DCRA [Department of Consumer and Regulatory Affairs] which pushed a lot of things back for us.

Zenger: Why have your neighbors and landlord been such roadblocks?

Todd: Well, internally, I think that our traction has caught a lot of attention. But anyone who would look at this from the outside, they would think it’s definitely prejudice because of who we are. They see two young black men with no outside help, no huge backer trying to literally build something from scratch. We don’t depend on anybody to create for ourselves. We’ve never had to, we’ve always found ways to reinvest into ourselves, and we put 100 percent into ourselves.

We’re not out here living lavish lifestyles, we’re literally trying to create a brand and a product that people appreciate and love, and it’s for everybody, it’s for our community. A lot of people don’t like that, so we get picked on. But it’s not a matter of us having a victim mentality, it’s about finding new solutions. At the end of the day, if we keep putting in this kind of work, we will have success.

Zenger: What were some other solutions you have employed to mitigate these conflicts?

Todd: We sat in with a few council members to understand where we might be in the wrong, how we should properly be operating. We also receive mentorship from H Street Main Street, which operates through the mayor’s office to help small businesses. We got a lot of guidance and mentorship from them. They make it easier — they write a lot of our letters to our landlord — besides our lawyer, of course. But they teach us how to properly approach these business situations because a lot of this is new ground for us. They have also gotten us grants to help combat this, because when we had to shut down, when we had no income coming in, we had to find ways to alleviate our finances. But also since we vocalize our battles, we get more opportunities.

A post shared by JERK AT NITE Inc. (@jerkatnite)

Zenger: What advice would you give to entrepreneurs just starting out?

Todd: The best advice is to just do it.  Then you need to firmly believe in yourself, have a product that is good and do it for the right reason. Our reason is we really want to have a quality cultural product for our community. So if you have the right reasons and good motivation, you’ll run into success no matter what. So to anybody starting a business, just start and don’t stop. If you do that, there’s always a solution to whatever comes up.

Todd: Follow us @jerkatnite on Instagram if you want to see some young brothers really trying to make something happen in the world, join us on our journey. Feel free to comment, reach out if you need help, ideas, conversation, inspiration or even mentorship. That’s one thing, we’re always open to learning. There’s a Jamaican idiom that my mother always says: “Raw meat seek fire.” It means every single day you have to actively look for information and opportunity. As a company, we do that. We love our community and we want to keep being able to serve it.