How Can Biden Solve A Problem Like Korea? White House Summit With South’s Leader Over Kim Threat 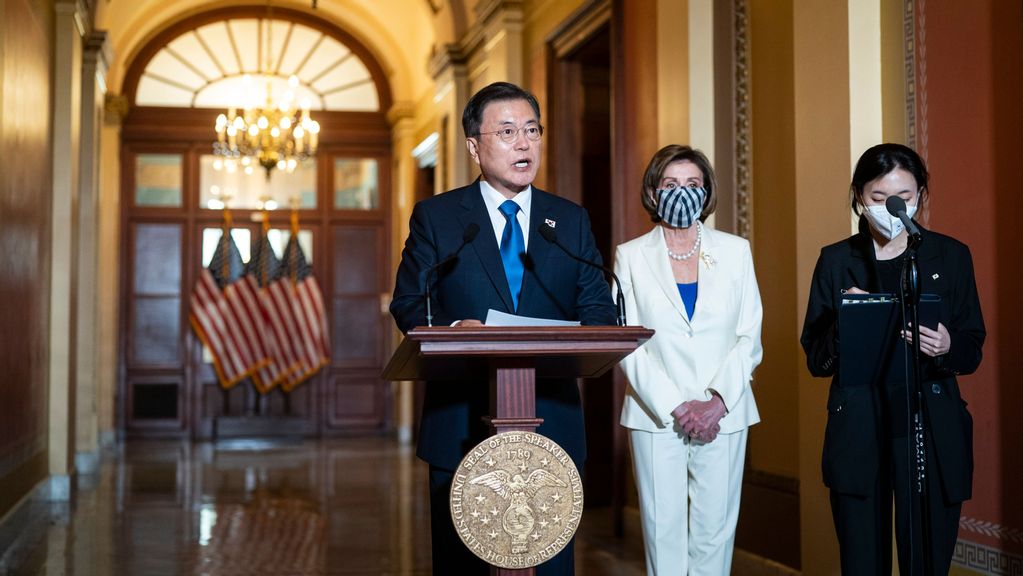 Yet many experts say there aren’t many options left that have not already been tried. Meanwhile, administration officials have so far been mum on how Biden’s approach might build on — or diverge from — policies set by his predecessor, Presidents Donald J. Trump, and former boss, President Barack H. Obama.

He has however abandoned both the fiery rhetoric and the personal diplomacy of Trump, who called first Kim “little rocket man” and threatened him with annihilation but crossed into North Korea, saluted its repressive military and offered him a ride on Air Force One.

White House press secretary Jen Psaki last month said only that the president acknowledges all presidents going back to Bill Clinton in the 1990s have failed in their stated goals to denuclearize North Korea.

“Our goal remains the complete denuclearization of the Korean Peninsula with a clear understanding that the efforts of the past four administrations have not achieved this objective,” Psaki told reporters.

“Our policy will not focus on achieving a grand bargain, nor will it rely on strategic patience.”

For his part, Biden has only signaled that he plans to differ from both Trump and Obama.

While full denuclearization of the Korean peninsula is still the ultimate goal, Biden has said he wants to find the middle ground between Trump’s unorthodox attempts at leader-to-leader diplomacy and Obama’s arms-length policy, which kept the door open to engagement with North Korea only if it changed behavior.

The White House has avoided calling this nonspecific approach a “step-by-step” strategy and has instead used terms such as “calibrated” and “practical.” It has said, though, Biden plans to build on the 2018 joint statement signed by Trump and North Korean leader Kim Jong Un at their historic meeting in Singapore.

If that’s the case, Biden, who says he is open to direct diplomacy with Kim, may stand to benefit on the North Korea question from information gleaned through Pyongyang’s approach to the Trump meetings, Scott Snyder, director of U.S.-Korea policy program at the Council on Foreign Relations, told Zenger News.

“We actually learned a lot about the North Korean intentions through that,” Snyder said of the Trump-Kim dalliance, before adding that the meetings nonetheless helped Pyongyang’s nuclear program grow.

“The bad thing about the Trump interaction with Kim Jong Un was that Trump appears to have misread Kim Jong Un’s intentions in ways that furthered North Korea’s commitment to pursuing the nuclear project and kind of redirected some U.S. focus away from the project.”

Among other things, Trump’s June 2018 meeting with Kim in Singapore — the first ever between a sitting U.S. president and North Korean leader — resulted in a joint pledge to pursue peace and denuclearization of the Korean Peninsula, as well as to recover the remains of U.S. troops who fought in the Korean War.

The two leaders then held a second summit in Vietnam’s capital, Hanoi, the next year. But the meeting ended early, after the pair failed to agree on full sanctions relief and denuclearization. They then restarted talks later that year, meeting inside the demilitarized zone that separates North Korea and South Korea. The two countries are formally still at war, with the peace the result of the 1953 armistice, a truce which is still to result in a peace treaty.

While Trump became the first sitting American president to cross into North Korea, his final meeting with Kim did not generate any substantial progress.

North Korea has since shown no indication that it plans to end its nuclear program.

The lesson for Biden, according to Snyder, is that “it may be necessary to deal with the decision-maker, but it’s also necessary to do it based on adequate preparations at lower-levels.”

Given his signals so far, the Biden administration is likely to now take an incremental approach to Pyongyang, where partial sanctions relief is offered in exchange for partial denuclearization.

However, Biden has already run into snags in his attempts at such outreach. Efforts by administration officials to resume dialogue with North Korean counterparts, for instance, have not gotten a response.

Instead, Kim’s regime has criticized the U.S. and South Korea for holding joint military exercises and also test fired two short-range ballistic missiles for the first time in a year in March. Pyongyang also reacted angrily to Biden’s mention of diplomacy during his first joint address to Congress last month.

For many experts, that suggests Biden may struggle to find a “novel” way to solve the North Korea issue.

“The Biden administration does not seem to be making a fundamentally different approach in dealing with North Korea. That being said, there is still a lot of room for opportunity and dialogue,” Michelle Kae, deputy director and producer of the Stimson Center’s 38 North Program, told Zenger.

“While some headlines have emerged over the past few weeks that North Korea has declined invitations to outreach attempts by the Biden administration, future invitations should perhaps include more concrete proposals that reflect previous commitments agreed upon in Singapore,” she said.

“Successive administrations have tried to persuade North Korea to abandon its nuclear ambitions without success. They have mostly used a mixture of sanctions and diplomatic carrots, and there aren’t many other tools available,” Gawthorpe said. “Given how incredibly destructive a war would be, the threat of it is not credible.”

“Biden’s approach is undefined, but it is hard to see what he can try that has not already been tried without success. He might not use the phrase ‘strategic patience,’ but I would expect his policy will look a lot like it.”

Biden has so far said more about posture than policy, a decision that could be aimed at maintaining maximum flexibility, Snyder added. But his lack of detail could also be an effort to keep the South Korean government onside in both its efforts on North Korea and its “broader game of rivalry with China.”

Moon’s administration is in favor of increased engagement with North Korea, and the South Korean leader is expected to today urge Biden to resume the stalled talks with Pyongyang urgently.

One thing appears certain, though: There will be no Biden-Kim meetings in the near future.

“The reality is that the U.S. has no good options to force North Korea to give up its nuclear weapons and has already for some time been pivoting de facto to a policy of containment: accepting North Korea is a nuclear power and threatening it with overwhelming destruction should it ever use them.”

Added Snyder: “From a political perspective, why take on that political risk of offering the outstretched hand and having North Korea give you the finger?”