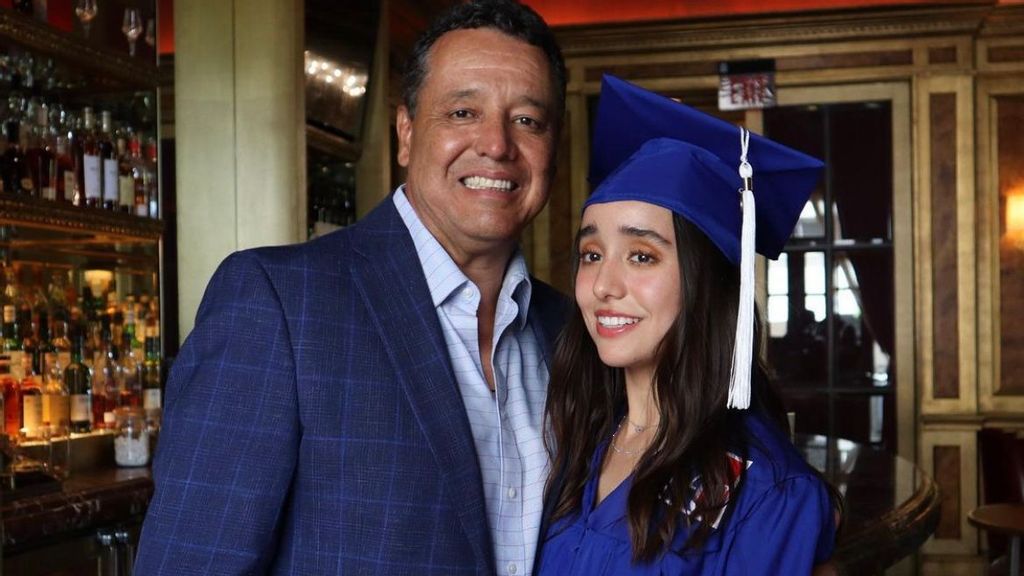 Carmenlucía Acosta, here with her father Dante Acosta, is interested in fashion journalism, but has won a scholarship thanks to her work on life on the border. (Courtesy Carmenlucía Acosta)

To limit the spread of COVID-19, since March 2020, the border between Mexico and the United States has been closed to non-essential overland travelers. When Carmenlucía Acosta heard, she thought of the hundreds of American children living in Mexico with their families, who needed to cross the border daily to study or receive medical attention in the United States.

Born in Texas, Acosta made that journey every morning during her high school years, when she studied at Loretto Academy in El Paso while living in Ciudad Juárez.

Acosta graduated in spring 2021 from the American University in Washington D.C. She majored in journalism and minored in both marketing and business entertainment.

“I wanted to be a journalist because I loved magazines. My favorite hobby was going to the supermarket and buying magazines,” Acosta told Zenger News.

During her last term, Acosta took an advanced journalism class from Jane Hall, a former Fox News Channel commentator and former Los Angeles Times correspondent in New York. One of Hall’s assignments was to pitch and write a news story, and Acosta decided to write about the pandemic’s impact on children living on the border.

“I realized that people do not know what it is like to live in the border area,” said Acosta. She believes the day-to-day stories of those whose lives are split by the border fence are carried away by the ocean of public policies and economic decisions that flood the media.

Acosta knew that some children needed to receive vaccinations or attend their graduation, but the decision regarding whether their trip was essential rested in the hands of the Border Patrol officer inspecting their papers. To the frustration of parents, families were not always allowed to cross. Though the parents’ entry could be restricted, their American children were technically able to enter the U.S. But they were too young to attend their affairs alone.

That was the story Acosta wanted to write. The young journalist pitched it to Hall, and the instructor accepted it. Acosta interviewed families and school officials in Ciudad Juárez and El Paso. Her piece was so compelling that Professor Hall prompted her to apply for a scholarship from the American News Women’s Club (ANWC).

For 90 years, the club has promoted the work of women journalists and raised awareness of their contributions to media. The ANWC has awarded scholarships to students at a handful of U.S. universities with outstanding journalism programs since 1975.

Acosta won one of these scholarships.

Although her dream is to become a fashion journalist, Acosta knows her years living in the border area had given her many stories to tell. She recognizes that misinformation about life in the border towns circulates both in Mexico and the United States.

She remembers a trip she made in 2015, when Ciudad Juárez was listed as one of the most dangerous cities in the world, and a Mexican asked her, “do you wear helmets there?”

“You realize how ignorant people can be,” she said.

As a Mexican-American woman, Acosta understands the extent to which Latinos are misrepresented in the media. “I grew up watching television in Spanish and English. And I didn’t see many people like me, with my skin color and my same features [on the screen],” she said.

Acosta is right about representation. In the United States, people working in television newsrooms in 2019 were 73.4 percent white journalists, 13.3 percent African-American, 10.9 percent Hispanic, with all other minorities comprising the last few percent, according to Statista. That same year, the U.S. population that self-identified as Hispanic or Latino, according to the Census Bureau, was 18.5 percent.

And so, story after story, Acosta does her bit. “I would love to give a space [to outstanding Latinas] so that they could tell their story and little girls can see them as role models,” she said. “When these girls see someone like them in the media, they would be able to think, ‘I can also be great.’”