Dead trees release less greenhouse gas than soil, but they still account for a 25 percent increase in CO2 in the ecosystem.
By Grainger Laffan May 20, 2021
Facebook
Twitter
Linkedin
Email 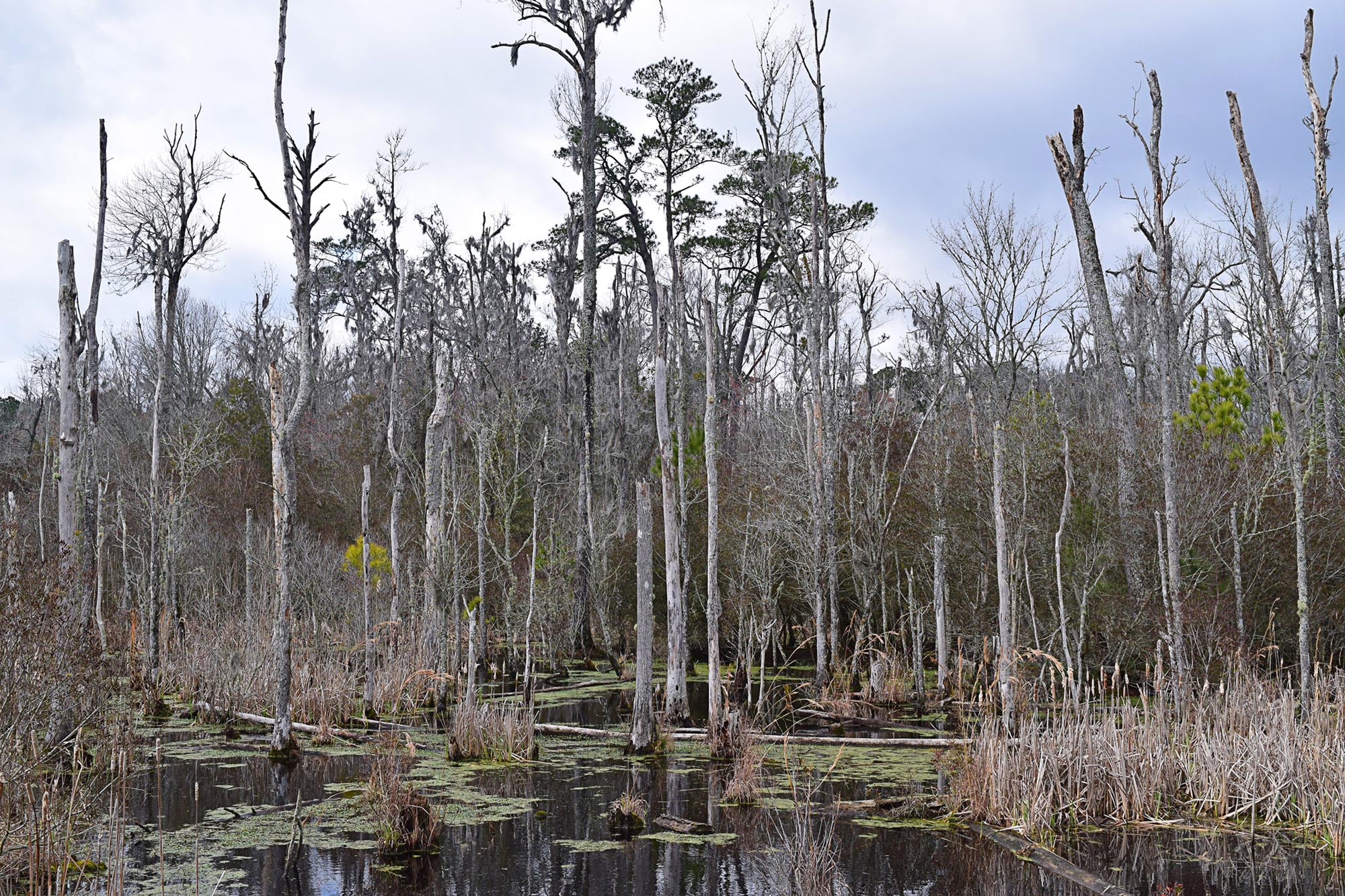 Climate change is turning coastal forests from carbon sinks into a source of greenhouse gases, according to a recent study.

The dead trees or “snags” killed by saltwater from rising seas now populate so-called ghost forests. They do not release as much greenhouse gas as soil, but they do account for a 25 percent increase in carbon dioxide released in the ecosystem, the study found.

“With standing dead trees, there are no more leaves to uptake carbon, so it’s smaller amounts [of greenhouse gases being emitted], but it’s just diffusing it into the atmosphere,” said Melinda Martinez, a graduate student at North Carolina State University and lead author of the study published in the journal Biogeochemistry.

All trees emit greenhouse gases she said, but this is offset by their ability to capture and store carbon. When saltwater incursion kills a forest, all carbon sequestration processes stop, but greenhouse gas emissions continue.

The ghost forest in North Carolina’s Albemarle-Pamlico Peninsula where Melinda Martinez found that trees killed by rising seas can cause 25 percent greater greenhouse emissions. (Marcelo Ardon/Zenger News)The dead trees in ghost forests act as straws that help pipe greenhouse gases from the soil into the atmosphere. Carbon dioxide, methane and nitrous oxide from the trees contribute to the total emissions, the study says.

“The snag could be upright [the straw effect] for decades,” Martinez said. “It depends on the rate of decay, but in some areas it can be up to 10-plus years before it decays away.”

During decomposition, the trees continue to emit some greenhouse gases.

“Our results illustrate the need to further research into the drivers and importance of GHG [greehous gas] emissions from snags, and the need to include tree stems into ecosystem GHG research,” Martinez wrote in the study.

The transition of wetland forests into dead marshland is increasing, Martinez said.

“It’s definitely a problem as obviously it would be much better if it [marshland] was a forest as it sequesters way more carbon.

“Looking at this in the grand scheme of things, it is a small percentage compared to more anthropogenic contributions. But globally there is a lot of uncertainty in the greenhouse gas budget, especially for methane. This research basically provides another piece to that large puzzle.”

“It is kind of eerie to see, kind of beautiful, but also sad as you know there was once a forest there.”

Her research was conducted in 2018 and 2019 during the first stage of her PhD studies. The next chapter, she said, is aimed at quantifying the problem, using satellite imagery to detect early warning signs of forests under threat.

“Ghost forests are not exclusive to North Carolina, so this is a phenomenon that’s occurring across the entire southeastern U.S. This is just the start, as not a lot of studies have focused on greenhouse gas emissions from standing dead trees,” she said.

“I’ve collaborated with other researchers, and we’ve discussed the importance of standing dead trees being included in regional greenhouse gas budgets. But even with live tree emissions, it’s a small portion of research,” she said.

The topic has gained momentum over the last few years, and “we will definitely be seeing more research on this take place.”