After years away from the music scene, R&B trio brings its '60s-era sound back.
By Percy Lovell Crawford May 20, 2021
Facebook
Twitter
Linkedin
Email 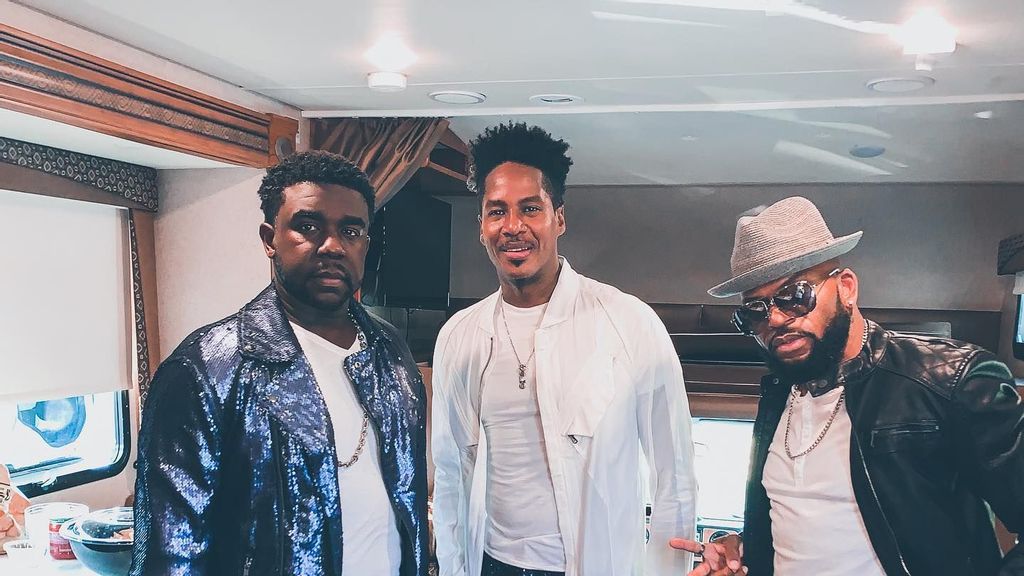 From left to right, J.D. Wesley, Dan Stokes and Dnell Chavis make up the group Solo. (Courtesy of Solo)

Discovered harmonizing on the streets of New York by legendary producers Jimmy Jam and Terry Lewis, Solo is thankful for its Motown-like intro into the music industry.

Live instrumentation and focus on vocals and songwriting makes it more suited for the golden era of R&B. They released their self-titled album in 1995 that went gold, thanks to hits such as “Heaven,” “Where Do You Want Me To Put It,” and a cover of Sam Cooke’s “A Change Is Gonna Come.”

Zenger News spoke with Dan Stokes, Dnell Chavis and J.D. Wesley about their musical influences, a potential Christmas album and much more.

Zenger: What was it like to start your career with production from the legendary duo, Jimmy Jam and Terry Lewis?

J.D. Wesley: It’s like starting off with A+, morally, ethically sound, great people and creative people. You are working with the best. We were lucky and blessed to meet at that moment in time. And we just learned so much.

Dnell Chavis: The experience was organic. I’m going to keep it short and sweet.

Dan Stokes: It was also like everything was happening at one time in all the rooms. It almost had the vibe of what it would have been like if we had been around back in the Motown era. Things were happening live. People were writing and creating in this room and building a track in that room. It was just full of energy every time you walked in. You couldn’t help but be in awe of the process.

Zenger: You guys had that old school Motown sound and vibe. Was that the inspiration behind the group?

Dan Stokes: Because Jimmy and Terry discovered us singing on the streets— people don’t believe that story was true — the music we were singing were all classics. Classics will stop people in their tracks if you could sing them well. We were able to block traffic on the greatest days. Jimmy and Terry just happened to see us.

They orchestrated that whole thought of, lets bring that to the ’90s. But we were young. We knew that we could write music, but we didn’t have a vision or idea of what would sell, who would like it. That sound was Jimmy and Terry’s idea completely.

Dnell Chavis: They definitely had the vision for us for that sound.

Zenger: How did a group, get its name?

Dnell Chavis: Well (laughing), it was actually me and a guy that’s not in the group right now, Eunique [Mack]. We came up with the name, which actually means “one” in Spanish. Plus, we were solo artists that could do solo things, so we figured why won’t we call ourselves Solo.

Zenger: I never want to sound like I’m not appreciative of today’s music and talents, but it seems things are more gimmick-driven now. You guys came on the scene, just amazing voices, implementation of real instruments and great storytelling. I feel we lack that today. What are your thoughts on that?

J.D. Wesley: Like you said, it is a gimmick. Most of these acts don’t have any real depth. There is nothing really there. I can’t even bring myself to listen to most of it now. But if you really listen to some newer stuff, especially since the pandemic, it seems like people are trying to go back to what music is really all about. And I’m glad about that. That’s good for groups like us, because it’s what we do.

Dan Stokes: I kind of disagree in a way. I do think that the authenticity of how we sing or what we were brought up on needs to be continued. I do hear it in different versions of people  younger than us. I hear musicianship coming back into the forefront, in particular with our black and brown brothers and sisters.

It’s ironic you used the word “gimmick” because when we came out with our upright bass, singing doo-wop, people said that that was our gimmick, even though that was our authentic style. So, I try to listen to the artistry and musicianship of everything that’s out there. I don’t want to broad-stroke it and say, they’re not doing anything, because there is a lot of talent out there in these young cats. I listen to all types of music, and I listen to what’s happening today, and I’m actually loving it. Vocalization is coming back, and I’m excited about it.

Zenger: I also think about the lack of tracks. You guys would put 18 or 19 tracks on an album. I don’t know if it’s about catering to the lack of attention span or it’s a creativity thing, but we get eight- or nine-track albums now.

Dnell Chavis: Yes! It’s very much rushed and another thing is, it’s missing soul. I mean, I like some of it too, don’t get me wrong. But most of it is just missing the soul.

J.D. Wesley: It was buried. You used to be able to go to the store, and whether it was CD or record, the person who was selling the music would tell you what’s hot, what he or she thinks you would like. They’ve been listening to it all day, and they can get you amped up. But with streaming, you gotta dig for it. You have to know what you’re looking for and set up the algorithms, so it dumps that into your streams, so that you’re exposed to music in a different way. I see my mom do it all the time: She listens to five artists. That’s what YouTube is going to shoot back to her because that’s what she listens to. You have to search harder for it.

We were told the mom-and-pop stores built the network of what were called the black foundation of listeners. You go to Chicago and make sure you stop at George’s, which I don’t even think is around anymore, to make sure he connects with what he’s been playing in the store, and people have been asking, “Who is that?,” which all translates into word-of-mouth.

Dnell Chavis: They were promoting it to a degree.

Dan Stokes: Particularly for our age group, which has never been the case ,except for maybe the ’60s. They don’t include people over 30 anymore. They don’t think about you as a consumer, which is dumb to me because we have the most money to spend (laughing).

Zenger: Do you sometimes feel there’s a lack of knowledge or appreciation for those who came before you in the music business?

Dnell Chavis: Everyone is in their own lane, man. But it would be nice to collaborate with different artists from today and back in the day.

Dan Stokes: I work around college students a lot, and it’s like a generational gap. You can name a show or artists, and they have no idea. Have you seen those two young black guys on YouTube who came across Phil Collins and their minds were blown? It’s like that. I think the record companies have a responsibility to keep the history alive. To understand that R&B ain’t dead, that jazz is not dead. People are going to jazz and R&B concerts all over the world every day.

Why not connect what the younger generation is doing to that? They used to be better at doing that. Clive Davis was good at doing that; he brought a lot of people whose careers were considered over back to life by doing that kind of stuff. It’s just about connectivity and consistency of the art form. I don’t feel like there is a respect for black music like that.

Zenger: What is it about “A Change Is Gonna Come” that brings out that inner Sam Cooke in everyone? Dnell, you brought it on your version, brother.

Dnell Chavis: Like I said before, it’s just the soul of it.

Dan Stokes: And a shout out to Eunique Mack for blowing that up and Stokely, who played the drums. We were really going for that live vibe, and then the moment kind of happened. And he killed it. I think it started with the lyrics that Sam wrote. And also, you can’t sing that song and sing it straight. His little inflection gives you that soulful umph when you’re singing it. And I think it started with him, his emotion in that song. It is timeless. You can listen to that today and be like, this is exactly what we need to hear.

Zenger: What can we expect to hear from Solo now?

Dan Stokes: We are still together, and we are all still doing our own things, so hopefully if you are able to search for the algorithms that show you our information, you might start hearing our music. Dave does music and also acts. And hopefully, we will get back out on the road and do a few shows here and there around the country once COVID-19 lets up. We enjoy being out there live more than anything.

Dnell Chavis: And hopefully, we get together and do a new song.

Dan Stokes: And maybe we’ll get that Christmas album finished.

J.D. Wesley: Oh, that would be awesome.

Zenger: What keeps you guys motivated?

Dan Stokes: For me, it’s the fear that when I die and meet God, he says, “I gave you all of this talent and you didn’t do anything with it.” I want to be able to say, “Look, I was trying. I was putting my heart in it.” It’s the inner need to create something or to feel something that drives me. But I also want to be able to meet my maker and say, “I tried to do the best that I could with the tools that you gave me.”

J.D. Wesley: And for me, because music has been an intricate part of my life almost since day one, I don’t know anything else. I sincerely believe that I am music, and music is me. Most people can see the separation, but I don’t. So, if I’m not doing it, it’s almost like I shouldn’t even be alive. I could just stop breathing.