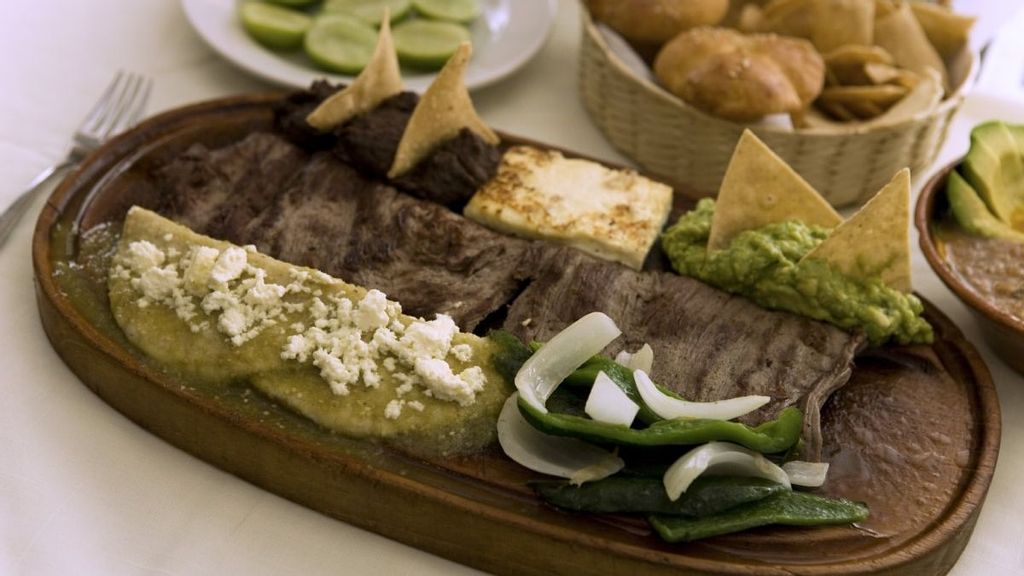 The steak has three enchiladas, refried beans, cheese and guacamole. It represents the point of union between the states of Veracruz, San Luis Potosí, and Tamaulipas. (Government of Tamaulipas)

Tampiqueña steak is a Mexican dish that celebrates the Huastec region’s gastronomy.

“Tampiqueña steak is one of the Huastec’s most typical dishes. The Huastec owes its culinary influence to the neighboring states of Veracruz, San Luis Potosi and Tamaulipas,” said Elvia Prieto Mendoza, a gastronomy graduate from Le Chef College, in Boca del Rio, Veracruz.

The Huastec natives inhabited the area before the Spanish arrival in Mexico — and this dish is one of its standard items.

“The main parts of this dish are steak, enchiladas and refried beans,” said Prieto Mendoza.

This traditional regional Mexican dish is originally from San Luis Potosí. By the 1930s, it reached Mexico City, where it became popular, due to its inexpensive preparation.

Over time, the dish’s popularity has grown.

“In recent years, we have added coleslaw or lettuce and fried plantains. It is now a dish served mainly at lunchtime and one of the most requested by diners in restaurants throughout Mexico,” said the chef.

The parts of the states that are part of the Huastec are represented in the dish. The steak represents the Panuco River that courses through the region, while the black beans represent Tamaulipas’ fertility and the enchiladas the San Luis Potosi green fields.

“We serve this dish because there are diners who cannot eat seafood. We offer Tampiqueña steak accompanied by black beans and enchiladas, which can be red or green. We also serve a small lettuce salad and guacamole, which diners love,” said Mary Villegas Pinto, the El Camarón Loco restaurant manager in Veracruz.

In its beginnings, the dish was not part of an afternoon meal but a breakfast dish, known as “Huastec lunch.”

How to prepare it

In a pre-heated pan, cook the marinated flank steaks. Place the fillets on oval plates. Add three green enchiladas to the plate, decorated with cream, cheese and white onion, on the side of the meat. Add a large serving of refried black beans to one side of the dish and guacamole.