PHOTOS: What The Imminent German Return Of Pillaged Artifacts Means For Nigerian History

A deal reached between Nigeria and Germany will see the restitution of a significant number of artifacts as from 2022.
By Nalova Akua May 19, 2021
Facebook
Twitter
Linkedin
Email 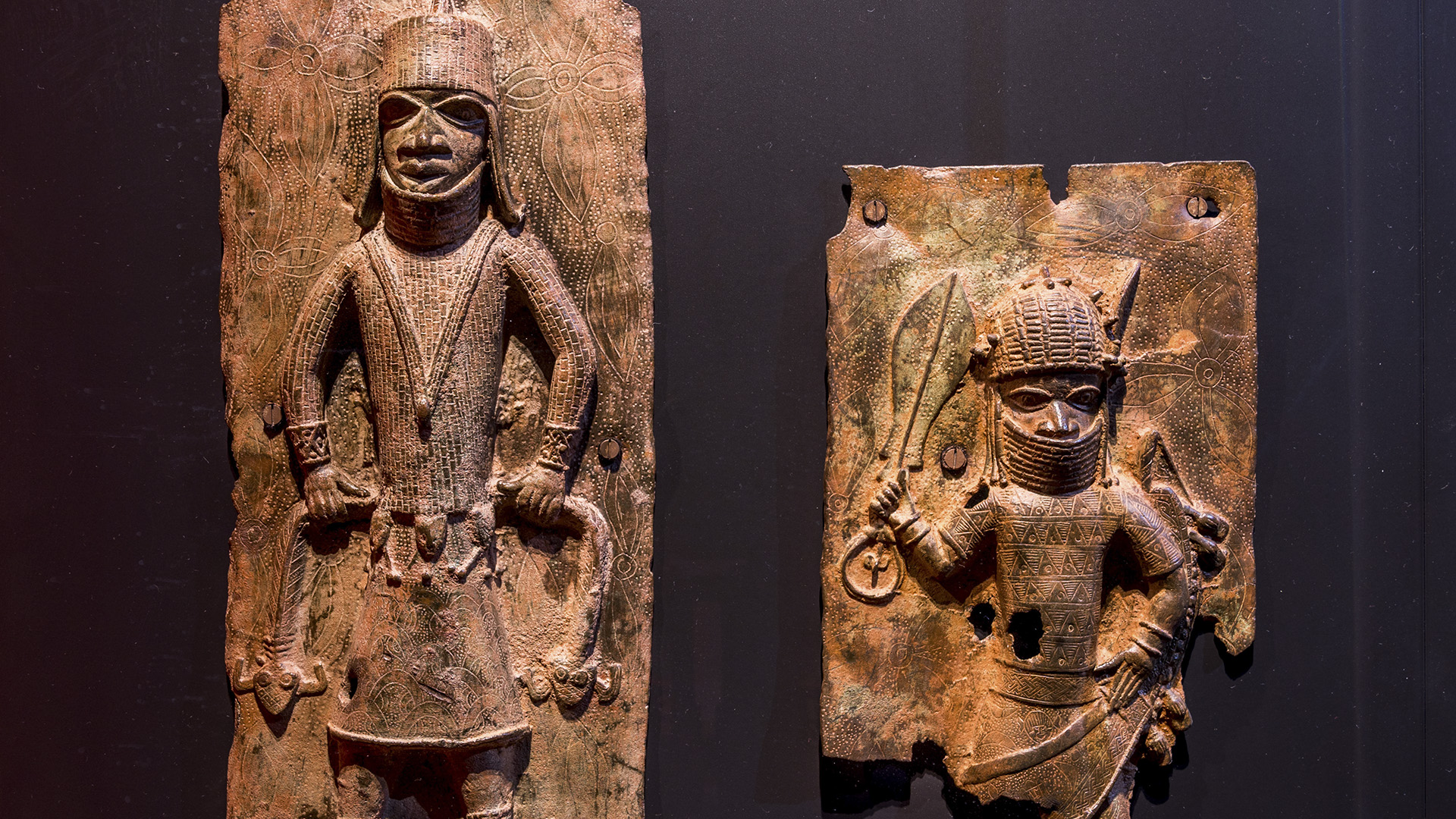 Sculptures looted by British soldiers from the Kingdom of Benin in 1897 hangs on display in the "Where Is Africa" exhibition at the Linden Museum on May 05, 2021 in Stuttgart, Germany. (Thomas Niedermueller/Getty Images)

YAOUNDÉ, Cameroon — People in the West African nation of Nigeria are excited about Germany’s decision to send back valuable artifacts looted from ancestors by British soldiers and sailors during the European colonization of Africa.

Known as the Benin Bronzes, the priceless artworks—made of brass and bronze—are a group of sculptures including elaborately decorated cast plagues, commemorative heads, animal and human figures, items of royal regalia, and personal ornaments.

They are named after the historical Kingdom of Benin, which is in present-day Edo State in southern Nigeria.

The decision to return the artifacts follows a compromise reached by a consortium known as the Benin Dialogue Group, which brings together the Nigerian government, the Edo State government, the Royal Court of Benin, and museum directors from Germany, Austria, the Netherlands, Sweden, and the United Kingdom.

“The participants agree that addressing German’s colonial past is an important issue for the whole society and a core task for cultural policy,” German culture minister Monika Grütters said in a statement on April 29.

The statement followed an emergency meeting held by German officials on how to handle the fate of the Benin Bronzes, thousands of which are in several museum collections across the nation.

“In addition to the greatest possible transparency, we aim for substantial returns,” Grütters said. “In this way, we would like to contribute to understanding and reconciliation with the descendants of the people who were robbed of their cultural treasures during the colonial era.”

The first restitution of the Nigerian artifacts will begin next year.

“We are in support of returning the artifacts because it is part of our history,” Prince Aderemi Ajibola, a cultural enthusiast and social activist in Nigeria, told Zenger News. “Because it is history and culture that defines every community or nation.”

“Conscience is an open wound, and only the truth can heal it. Germany’s conscience has chosen the right path in returning the looted artifacts because they did not belong to them. They could never stand as their history. It can only [show the] historical side of a raid on innocent people in a foreign land.”

In Germany’s capital, Berlin, the Ethnological Museum harbors many artifacts from the ancient Nigerian Kingdom, numbering 530 in total, 440 of which are bronzes.

The British Museum is home to at least 900 similar masterpieces.

The bronzes are viewed as among the best artifacts produced in Africa. Individual pieces have sold for millions of dollars at auctions abroad.

“Africa is the cradle of humanity,” Willibroad Dze-Ngwa, a political history and international studies professor at the University of Yaounde I in Cameroon, told Zenger News.

“It is common knowledge that all colonial masters, whenever they found anything in Africa, were amazed about its origin and had to steal them. Other European countries have been returning these items covertly. Germany is doing it openly, which is welcome.”

“The return of African artifacts, particularly the Nigerian ones, will revalorize the items and give Africans, in general, a sense of craftsmanship.”

“It is the beginning of the recognition of Western powers that some European countries pilfered not only artifacts but also other precious items from Africa,” Dze-Ngwa said.

History has it that in 1897, the Kingdom of Benin was attacked by the British, culminating in the king’s exile, the razing down of the city, and the looting of art objects.

Germany bought some 1,100 of the pilfered bronzes.

Repeated demands by the Kingdom of Benin to reclaim the bronzes after the British invasion met a brick wall, and so did efforts by the Nigerian government since achieving independence in 1960.

The city of Benin in southern Nigeria is still littered with bronzes, as was the case during the precolonial era, said Ajibola. It is a craft handed down from generation to generation.

A project known as the Edo Museum of West African Art is afoot to house artifacts from the region.

Retired Cameroonian anthropologist Paul Nchoji Nkwi said bringing back stolen African artifacts is one thing, but putting up suitable facilities to house them is a different challenge.

“Countries that have been receiving the artifacts must possess adequate facilities or museums for their preservation,” Nkwi told Zenger News.

“It would be needless if these artifacts are brought to Africa and not properly curated and preserved. It is not just sending back the artifact, but the history, the social culture, and the spirit of these objects must be brought out. That is, using the artifacts as educational tools to teach our children the glorious past of our ancestors.”