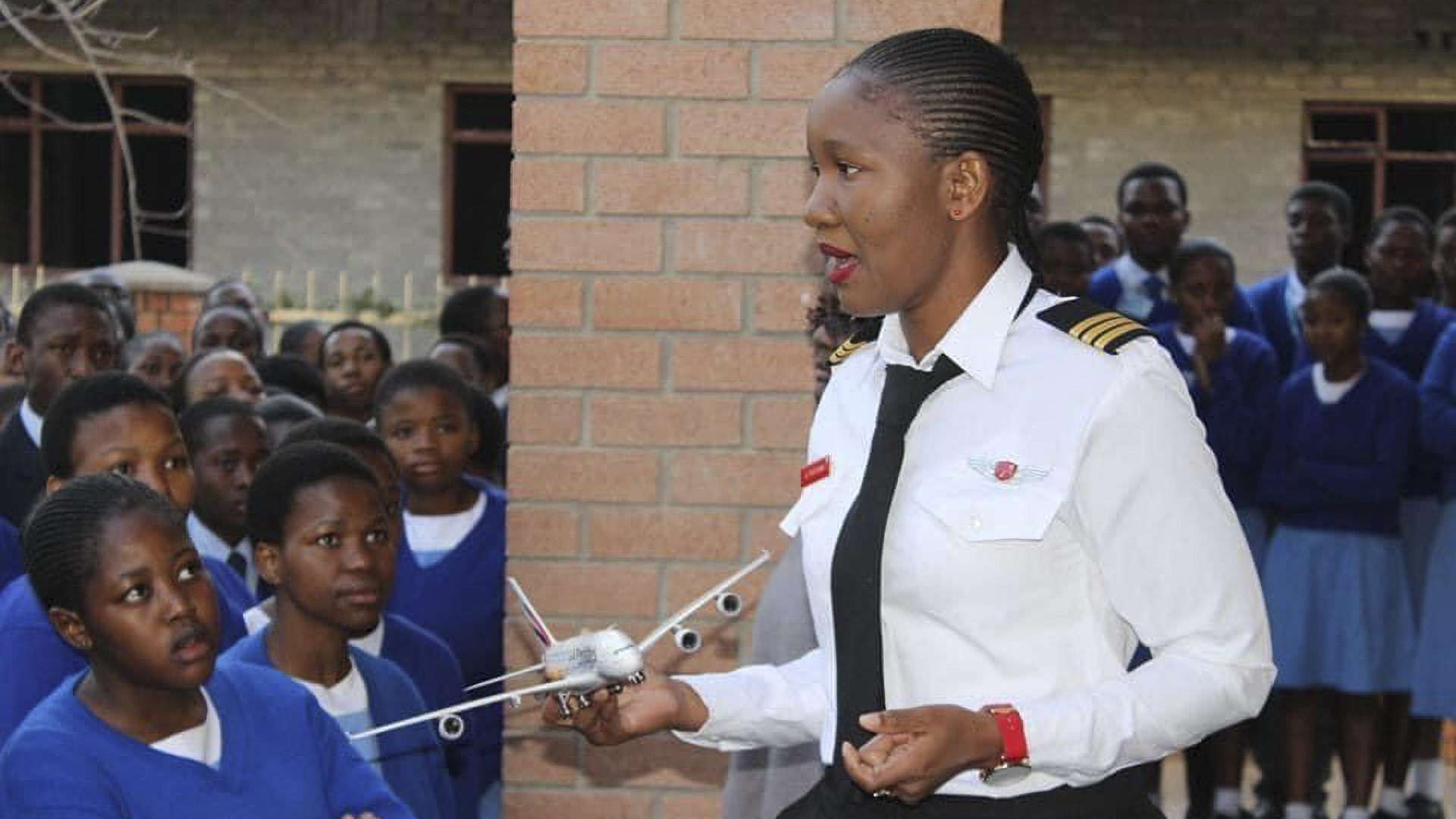 GABORONE, Botswana — Growing up in the dusty village of Ledumadumane a few miles outside Gaborone, Botswana’s capital, Kgomotso Phatsima dreamed of being a pilot.

As a young girl, she would watch with fascination as planes flew above her mother’s thatched house outside Sir Seretse Khama International Airport, the thought of one day being inside one enveloping her.

“I always wondered how it would be to be in the sky like a bird, flying that huge machine,” Phatsima, now 38-year-old and a captain at Botswana air force told Zenger News.

“At the time, as a girl in my community, the best you could do was be a nurse or a teacher. There was little inspiration to be a pilot. I had to rely on my own research and the little career guidance to learn more about aviation.” 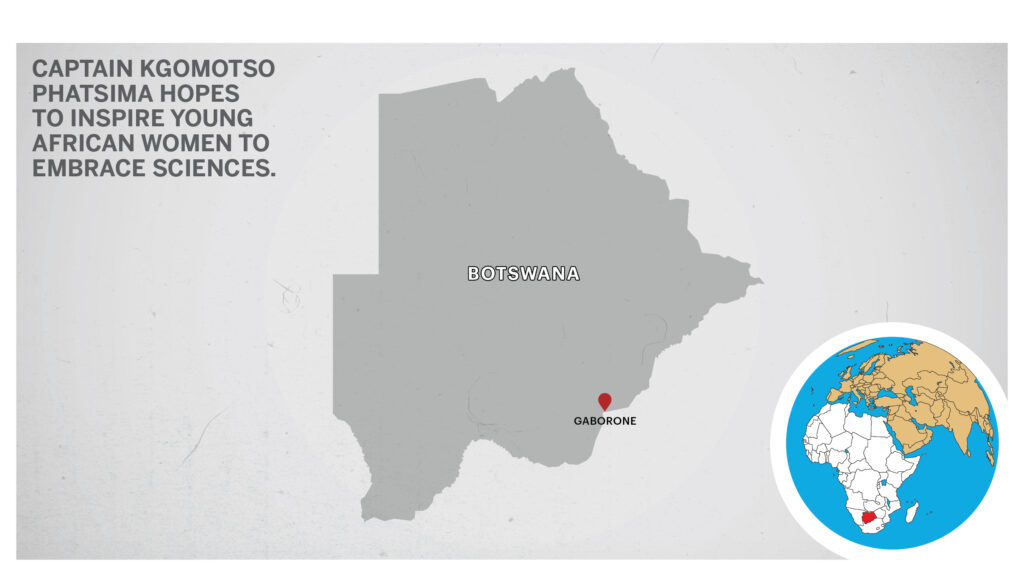 The idea of a township child flying an airplane seemed lofty, but Phatsima never lost focus.

Coming from a low-income family, education was her only way out of poverty.

After completing secondary school, she applied to an aviation school in South Africa, but her family did not support her dream. Her mother advised her to choose a “safe” career— like teaching.

And so, she pursued a Bachelor of Education degree at the University of Botswana, but after teaching for a year, she quit.

“I realized that teaching was not my passion,” she said.

When the Botswana Defense Force enlisted its first batch of women into the armed forces in 2009, she applied and got accepted.

“But even then, I did not get the blessing of my parents,” she said.

So worried was her family by her career choice that when she was due to undergo aviation training with the Botswana Defense Forces, one of her sisters secretly went to her military bosses and requested them not to allow her to take to the skies, fearing for her life.

“When we were young, being a pilot was not something that women did,” her mother Keneilwe Phatsima told Zenger News. “Kgomotso has been dedicated in her career, and we as her family now appreciate her accomplishments. I hope that other young women follow in her footsteps.”

Being in the military presented Kgomotso Phatsima with the perfect opportunity to pursue her dream of flying planes. It was not easy competing with men and trying to prove herself constantly, she says.

“There were times I felt like throwing in the towel but, I liked the idea of serving my country, and at the back of my mind, I also wanted to see myself in the cockpit of a military plane,” she said.

In the army, she worked her way up the ranks, becoming the first woman in Botswana to fly a military aircraft to becoming a captain in the air force.

This inspired her to start Dare To Dream in 2019, which helps young people get a head start in aviation and engineering. They mentor young people on the subjects they need to pass to qualify for these fields.

She says Dare To Dream is dedicated to advancing young women and girls in science, technology, engineering, arts, mathematics, entrepreneurship, and aviation and aerospace sciences.

Dare To Dream has partnered with Airbus Foundation, and they reached more than 3,500 students, both boys, and girls, across rural and urban Botswana through robotics and coding workshops.

She has also partnered with Airbus Foundation to enroll about 1,000 young Africans between the ages of 10 and 16 in Little Engineer Discovery Space Programs.

“It is such grassroots programs that are helping young people to develop an interest in aviation and engineering. Botswana is one of the few countries in which Airbus Foundation has launched the famed Little Engineers Discovery program,” she said.

Phatsima is also an ambassador of Youth in Aviation and Aerospace.

Dare To Dream is also currently spearheading the FLY for STEAME Southern Africa Initiative dedicated to inspiring, especially the girls, to consider opportunities in STEAME.

“To date, we have flown close to 400 students in partnership with Air Botswana and the Civil Aviation Authority of Botswana,” she said.

They are also rolling out a Youth Employability Accelerator program in partnership with First National Bank Botswana Foundation.

“This initiative will train 30 youth aged between 18 and 35 years for three months and equip them with the latest skills in CV writing, social media and digital branding, and business planning, among others,” she said.

Her former boss at the Botswana Defense Forces, Captain Phineas Lesole, said Phatsima was dedicated to her military career and always showed courage.

“She was always willing to learn and to go the extra mile,” he told Zenger News. “I noted her tenacity, which carried her through military training—which is not easy, particularly for women.”

Phatsima was awarded the United Kingdom’s Commonwealth Points of Light award in December 2018.

She uses her story to inspire young people to know that their dreams are valid and can break ground in the aviation and engineering fields.

In her book, “Born to Fly”, Phatsima says her rise in her career was not easy, but she with great focus and resilience, women can achieve their dreams.

Phatsima has controversially claimed in her book that the aviation industry is “white and male” and said this narrative had to be changed to make the industry more inclusive for women and people of color.

“I have fulfilled my dreams. I hope to inspire young women to be fearless in pursuing what sets their souls on fire.  I want to teach them to be brave enough to explore uncharted territory and make strides in male-dominated industries,” she said.