Country now braces for Cyclone Yaas that is expected to develop close to the north Andaman Sea around May 22.
By Saptak Datta May 19, 2021
Facebook
Twitter
Linkedin
Email 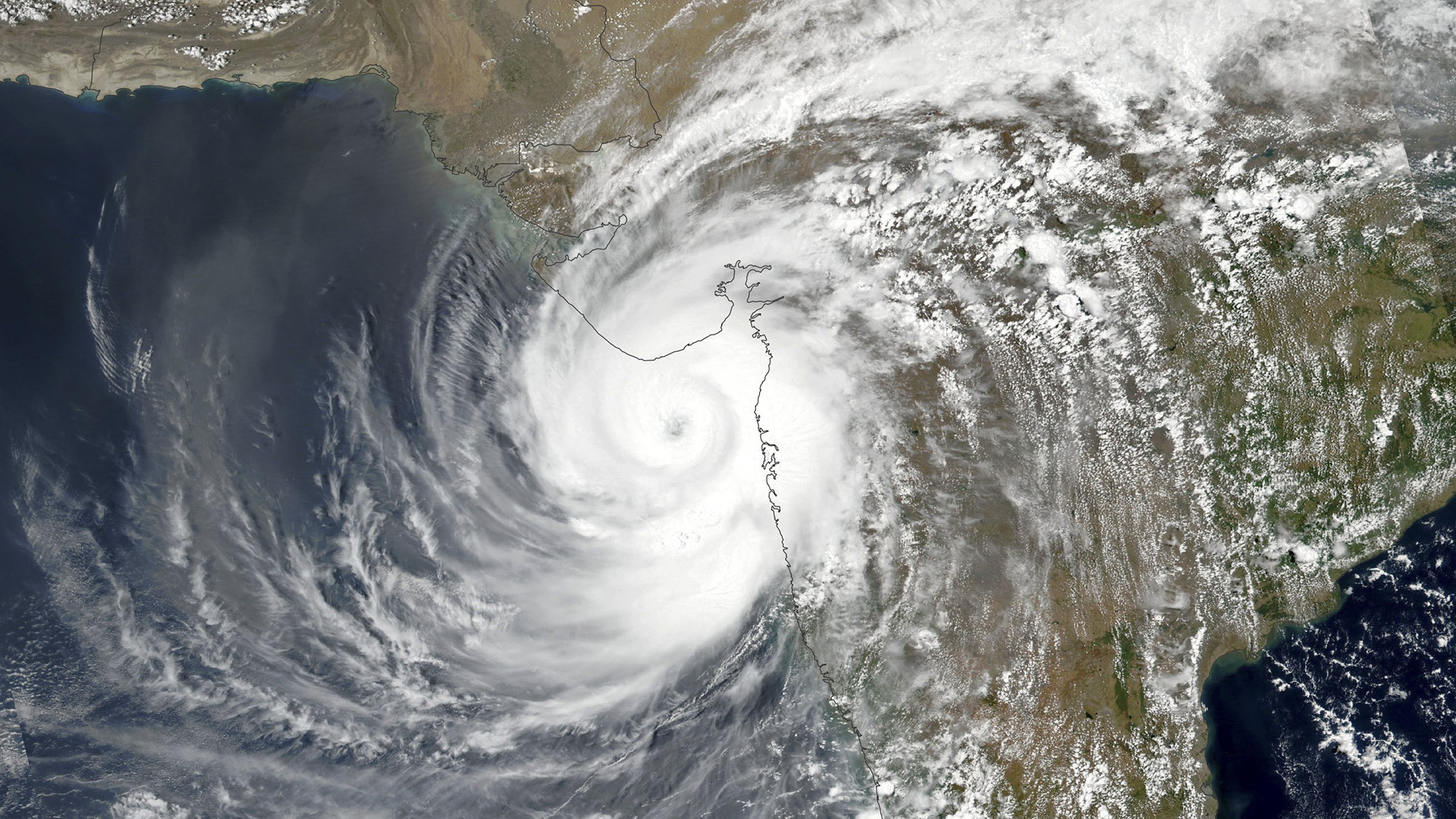 Traveling at the peak of 170 kilometers (106 miles) per hour, cyclone Tauktae left a trail of destruction in Gujarat, Maharashtra, Karnataka, and Goa. (NASA-NOAA)

KOLKATA, India — Traveling at the peak of 170 kilometers (106 miles) per hour, Tauktae, a severe cyclone storm, ravaged India’s western coast killing over 50 people and leaving almost a hundred missing on May 17-18.

The cyclone left a trail of destruction in Karnataka, Maharashtra, Goa, Gujarat, and Rajasthan, damaging over 16,000 houses and uprooting over 40,000 trees on its way.

On May 19, the cyclone weakened and brought heavy rainfall in different parts of the country, including the National Capital Region in the north and Bihar in the east. 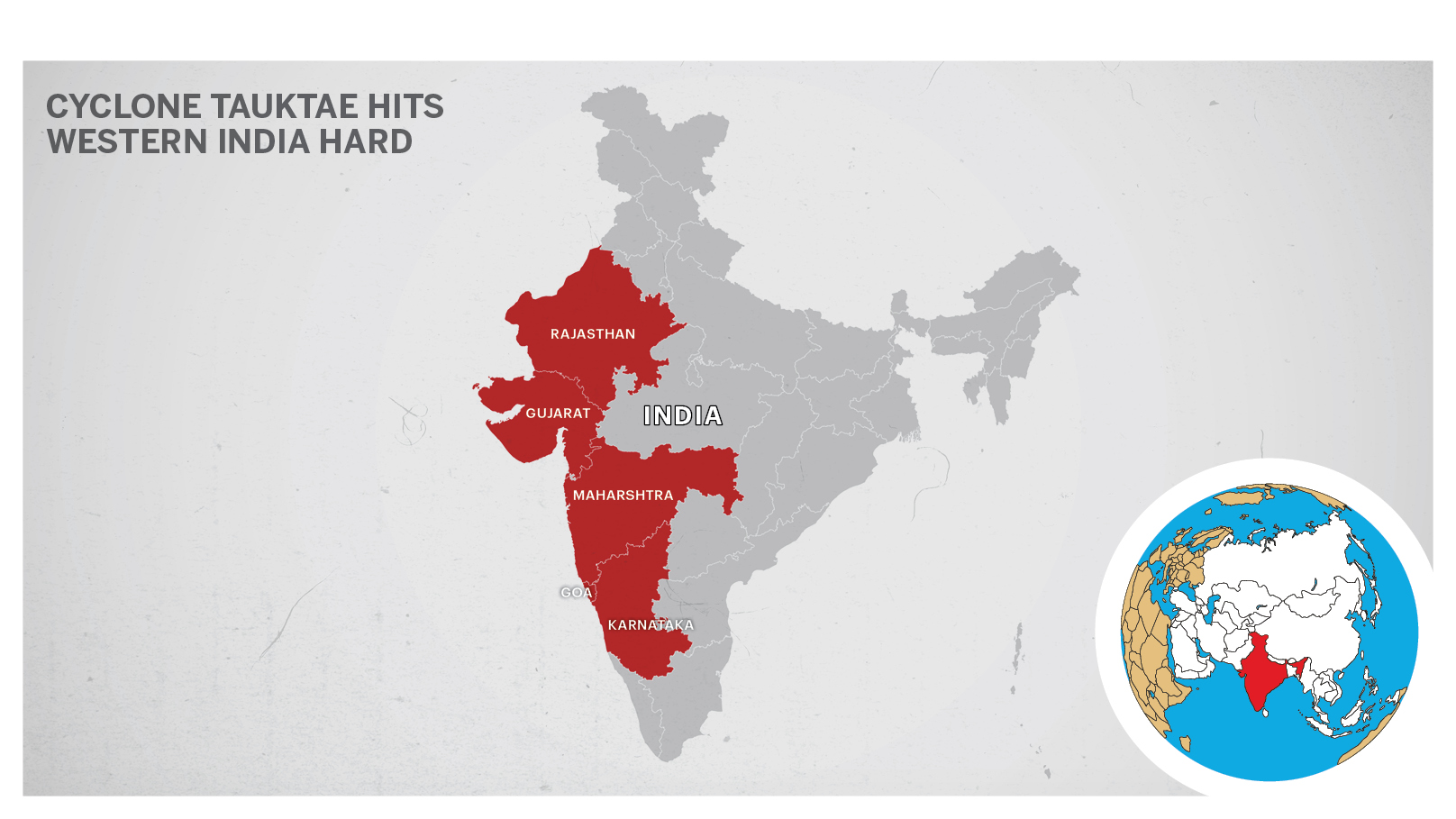 Delhi recorded the highest-ever rainfall in 24 hours in May as Cyclone Tauktae impacted the weather of the national capital and its surrounding areas.

Delhi recorded a temperature of 23.8 degrees Celsius (74.84 degrees Fahrenheit) — the lowest in May since 1951 and 16 degrees below normal for this time of the year.

Delhi’s maximum temperature was lesser than that of Srinagar and Dharamshala — the hill stations that travelers visit in May.

In neighboring country Pakistan, there were reports of at least four deaths due to a massive dust storm caused due to the influence of the cyclone.

Lower Sindh districts, including Karachi, have been under the influence of Tauktae.

The cyclone originated in the Arabian Sea and moved towards the Union Territory of Diu and Una, a city in the western city of Gujarat. It traveled across Maharashtra and Gujarat before ending in Rajasthan.

Prime Minister Narendra Modi, along with Gujarat’s Chief Minister Vijay Rupani, conducted an aerial survey to review the devastation left behind by Tauktae in Gujarat.

“PM Narendra Modi conducted an aerial survey of the districts in Gujarat affected by Tauktae cyclone,” tweeted Rupani. “After that, granted INR 1,000 crore [$1,36,607] for immediate relief operations and an INR 200,000 [$2,732] compensation for the kin of the deceased.”

The government also announced the assistance of INR 50,000 ($682) for those injured in cyclone-related incidents in all states affected by Tauktae.

Port infrastructure belonging to several firms in Gujarat, which were in the path of Cyclone Tauktae, suffered damages.

The cyclone also damaged many Covid-19 care centers and vaccination sites, such as the NESCO Jumbo vaccine center at Mumbai’s Goregaon, on its path. Some Bollywood movie sets such as those of “Tiger 3”, “Gangubai Kathiawadi”, and “Maidaan”, and other TV production sets were also damaged.

Cyclone Tauktae is the first “extremely severe cyclone” that has hit the Mumbai coast in the last 130 years, as per the Indian Meteorological Department.

“About 44 NDRF teams are deployed in the state of Gujarat where the landfall of the cyclone took place between Porbandar and Mahuva during the night of May 17,” Deepak Bhamoriya, deputy commandant of the NDRF, told Zenger News.

“Besides, 10 teams in Maharashtra, nine in Kerala, eight in Tamil Nadu, three in Karnataka, and Daman & Diu each, one team each in Dadra Nagar & Haveli and Goa were deployed,” Bhamoriya said.

State governments and disaster management forces sprang into action and evacuated tens of thousands of people from their homes as the cyclone barreled towards landfall, uprooted trees, and caused power outages in several areas.

“The NDRF has evacuated thousands of stranded people to a safer place in Gujarat, Kerala, and Daman & Diu and is assisting district administration in mass evacuation of people from the coastline,” Bhamoriya told Zenger News.

“Teams are continuously cutting and clearing heavy fallen trees and uprooted electric poles on roadsides to maintain the lifelines caused by the devastating gales and heavy rains.”

The Indian Navy said it had rescued 182 of the 261 people aboard on the oilfield accommodation barge on India’s Oil and Natural Gas Corporation, which sank on the Mumbai coast.

At least 26 personnel onboard barge P-305 that went adrift in cyclone Tauktae fury before sinking in the Arabian Sea are dead, Navy officials said.

Dozens of people on the barge deployed for offshore drilling are still missing.

Four vessels that India’s Oil and Natural Gas Corporation put into service had gone adrift in the high seas after Cyclone Tauktae hit.

In another operation, an Indian Navy Seaking helicopter rescued 35 members of the crew of GAL Constructor, which ran aground north of Mumbai.

“The sea continues to be extremely rough with sea state 4-5 and winds 25-30 knots (approximately 22-34 miles-per-hour), posing a challenge to the ships and aircraft involved in search and rescue operations,” the Indian Navy said in a statement.

The Cellular Operators Association of India, an Indian non-governmental trade association and advocacy group, is working with India’s department of telecommunications, infrastructure providers, and local state authorities to minimize the impact of the cyclone on the telecom networks.

“Close coordination with the National Disaster Management Authority and their teams in the field is being done,” Lieutenant General S.P. Kochhar, director-general, Cellular Operators Association of India, told Zenger News.

“We are taking every possible step to mitigate the cyclone’s impact on people in the states of Gujarat, Maharashtra, Karnataka, Goa, and Diu. This is to ensure that the adverse impact of this cyclone is minimal and the disruption in telecommunications and internet services caused by the cyclone is restored at the earliest.”

A telephony service provider is a software interface to a physical telephony device (such as a modem) that can be accessed programmatically to perform actions such as dialing a phone number or logging a call.

In the absence of grid supply, adequate diesel and battery backup at telecom sites is ensuring continuity of services.

Every year, on average, five cyclones form in the Bay of Bengal and the Arabian Sea combined.

Since the Bay of Bengal is warmer, it is more prone to cyclones. However, scientists and meteorologists claimed that the Arabian Sea is also warming due to climate change.

“With the temperature rise and the Sea Surface Temperature increasing in the Arabian Sea, there are more cyclones in that particular area,” Anumita Roychowdhury, executive director, Center for Science and Environment, told Zenger News.

“Climate change contributes to extreme weather events, higher intensity storms, and cyclones. This is the evidence that global temperature rise is an actual concern for the people.”

Another cyclone named Yaas is expected to develop close to the north Andaman Sea around May 22 and reach either the eastern states of Odisha or West Bengal by May 26.

“New low-pressure area likely to form in the Bay of Bengal around May 22 to intensify into a cyclonic storm and reach West Bengal and Odisha coast by May 26,” cautioned the National Disaster Management Authority.

“Sea conditions to remain rough in the Bay of Bengal from May 21. Fishermen are requested to return to shores.”

Roychowdhury said the cost of such climate change would be slow but enormous, and decarbonizing should be the priority for every country to keep a balance in the temperature.

“Climate change will have a social burden in the economy,” Roychowdhury told Zenger News.

Recent cyclones such as Amphan and Fani add evidence to the trend as they intensified from weak cyclonic storms to extremely severe cyclones in less than 24 hours.