Supporters of Mexico’s many political parties accompany their chosen candidate with dances and songs as a show of support. 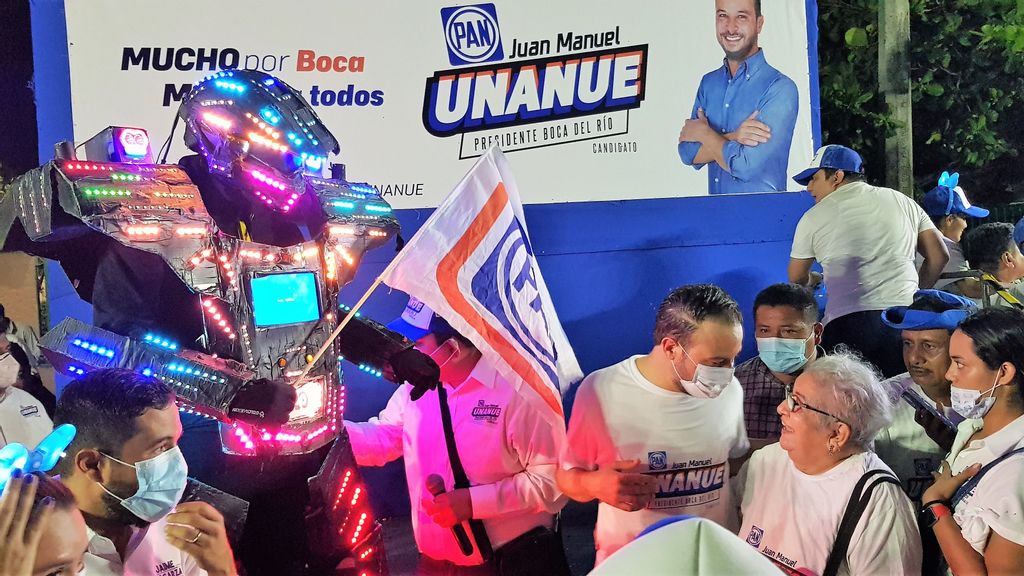 Mexico’s midterm elections will occur on June 6th. Local candidates have gone out to meet the citizenry with events that look more like carnivals than political campaigns. (Charlie Moron/Café Words)

Mexico’s midterm elections are approaching, and people know it.

“I support the National Action Party (Partido Acción Nacional, PAN). Since I was little, my mother took me along to the various political rallies, so I grew to love them. Nowadays, I take my family to the demonstrations and show all of my support for the candidate,” said Jorge Villanueva Solano, a family man in Boca del Rio, Veracruz.

In the upcoming midterm elections on June 6, voters will cast their ballots for senators, federal and local deputies, mayors, and 15 state governors.

As the elections draw near, people come out to support their favorite candidates with dances, parades and more.

“It is something prevalent that people do whenever there are upcoming elections,” said Villanueva Soto. “One of the ways to support the candidates is to walk alongside them, visiting people from door to door, and greeting and listening to the neighborhoods’ problems, so that, when they get elected, know what issues to tackle to improve the lives of the citizenry.”

Political parties carry out different processes to select the candidates who will run for the many public offices.

Candidates have a short time to convince the public to vote for them. They use different strategies, such as posting their proposals on social media, doing interviews with news stations, or even making viral videos on TikTok.

Candidates also seek new voters by going from house to house. To liven up these rallies through the country’s neighborhoods, they sometimes blast catchy music and dance with costumed characters or stilt walkers.

These political rallies look more like carnivals, where supporters engage in festive activities rather, not serious campaign proposals. But this doesn’t mean the candidates lose support. On the contrary, people come out to support their political party.

“The Veracruz people have always been festive, relaxed people. These rallies are no exception. With each passing election, candidates are getting more creative to try and convince new voters. I, for one, analyze their proposals to know which is the better for my city, my state, and my country,” he said.

But not everyone likes this type of political rally. Rosario Coba, originally from Veracruz, says these ‘carnivals’ have made her uncomfortable on more than one occasion.

“I understand that times have changed, and candidates have to use whatever they have at hand to obtain new voters,” she said. “However, when they do their rallies and go from house to house, blocking the streets and impeding cars from moving around. I dread to imagine an ambulance needing to arrive at a house on an emergency and having the street blocked because some candidate wants to have their rally.”

Whether people like it or not, times change and political campaigns must adapt. There have always been creative candidates who have revolutionized their campaigns or their proposals to spread their message and attract voters. A candidate’s goal, after all, is to win.