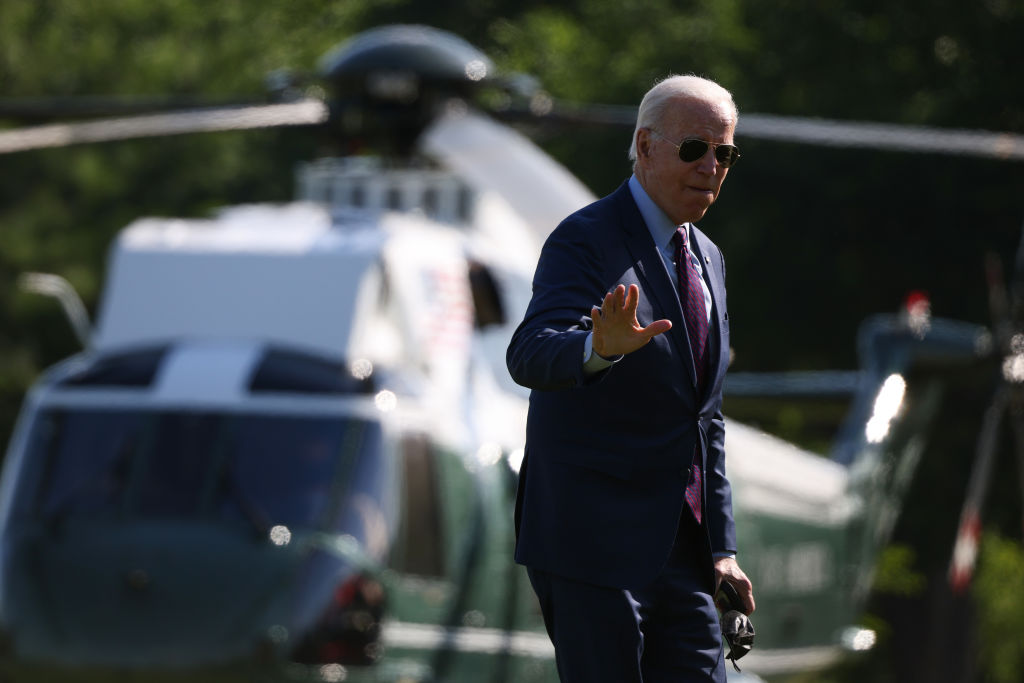 President Joseph R. Biden Jr. waves after stepping off Marine One near the White House in Washington, D.C., on May 18. Biden spent the day visiting the Ford Rouge Electric Vehicle Center in Dearborn, Michigan and delivered remarks on infrastructure. (Anna Moneymaker/Getty Images)

Biden’s tour of the Ford Rouge Electric Vehicle Center comes a day before the automaker unveils its new electric F-150 pickup truck and amid growing debate about his $2.25 trillion infrastructure plan, which allocates significant funding to electric vehicles. While the opposition to his spending plans has come mostly from Republican lawmakers, unions have also expressed worries about shifting to electric cars too quickly.

In his speech, Biden said that American automakers and workers could not just ignore a shifting global market for cars.

“The future of the auto industry is electric. There’s no turning back,” Biden said after previewing the Ford F-150 Lightning.

But Biden promised to make sure American jobs would not be sacrificed.

Calling his infrastructure plan his “blue collar blueprint to rebuild America,” the president promised the spending would create a fairer economic deal for working-class people than in recent decades.

“They feel left out and left behind in an economy and an industry that’s rapidly changing,” Biden said. “But we will leave no one behind.”

“If we act to save the planet, we can generate millions of good-paying jobs.”

The electric version of the best-selling pickup truck in the United States will be officially unveiled by Ford on Wednesday.

It will belong to the company’s first set of electric vehicles, including last year’s Mustang Mach-E and an electric Transit van still in the works. Production is set to begin next spring, with an aim to be rolling off the assembly line in 2022.

“EVs” are central to Biden’s American Jobs Plan, which includes $174 billion in spending to “win” the global electric vehicle race.

Apart from giving consumers point-of-sale rebates and tax incentives to buy American-made EVs, the proposal aims to create grants and incentives for states, localities and private businesses to join a national network of 500,000 EV chargers by 2030. It also aims to replace 50,000 diesel transit vehicles and electrify 20 percent of public school buses the federal fleet, including the United States Postal Service.

The plans have been largely welcomed by environmental groups.

“This sweeping plan is an excellent starting point for transforming our infrastructure to create jobs, increase equity, and enable a low-carbon future,” Steven Nadel, executive director of the American Council for an Energy-Efficient Economy.

“This plan would be a big step toward meeting our economic and climate challenges.”

Although Biden used his speech to pledge support for strengthening unions and providing training for American workers to “operate and maintain this 21st century infrastructure,” some union leaders say they worry about the impact the shift may have on U.S. jobs. The United Auto Workers union, for instance, whose members work at the Michigan Ford plant, has cautioned that the push for electrification could mean fewer jobs on the assembly floor.

“We need to make sure that the workers in the United States make these vehicles and components here in the U.S. with good paying union jobs,” United Auto Workers President Rory L. Gamble told Zenger News.

Apart from Ford, General Motors has pledged to invest another $9 billion toward electric vehicle and battery plants in Michigan, Ohio and Tennessee. The United Auto Workers blasted Ford competitor General Motors’ “unseemly” decision to invest $1 billion into building electric vehicles at its Mexico plant, arguing no federal subsidies should go to production outside the U.S.

The union also criticized Ford’s plan to build a separate EV in Mexico, where the company already makes the Mustang Mach-E.

Auto jobs are a hot political and economic commodity in Michigan.

Nicknamed “Motor City,” Detroit has been long recognized as the historic heart of the automobile industry in the U.S., contributing to the state’s large demographic of blue collar, Rust Belt workers. Of the more than 1.8 million Michigan jobs paying over the national median in 2019, about 22 percent were blue collar, according to nonpartisan nonprofit Michigan Future, Inc.

That year, more than 38,200 people in Michigan worked in the vehicle manufacturing industry.

Significantly, the newly minted swing state has played a major role in the past two presidential elections.

Former President Donald J. Trump edged out Democratic presidential nominee Hillary Clinton in the key battleground by just 0.2 percent in 2016, marking the first time the state chose a Republican for president since 1996. By 2020, though, Michigan’s blue collar workers, including auto industry employees, were still battling job losses as plants and dealerships closed and sales dropped during the COVID-19 pandemic.

Trump claimed to have saved the car industry from destruction, but his relationship with auto firms strained as his administration attempted to dilute emissions standards and challenged California’s decision to set its own clean air requirements. Both Ford and General Motors criticized the moves, with the latter going so far as to publicly embrace Biden’s “Build Back Better” agenda.

“Auto workers already face uphill struggles as U.S. auto manufacturing today is only about one-third the level it was two decades ago, and now the president wants to replace petroleum-run vehicles with electric vehicles that will require about 30 percent less labor,” she said. “It doesn’t make sense to use taxpayer dollars to force an unnatural shift to electric vehicles that could result in tens of thousands of job losses.”

“Expediting shifts in the labor market … is not the way to help workers, nor to win their support,” she said.

Despite these pitfalls, Biden now has to find the right timing for his electric vehicles plan to ensure his party does not again lose Michigan. If managed properly, Biden — or his Democratic successor — may yet be able to win back the state as a comfortable Democrat hold.

“The switch to EVs will be relatively gradual,” Dean Baker, a senior economist at the Center for Economic & Policy Research, told Zenger.

“That doesn’t mean no one will lose a job, but it will be nothing like the job loss due to trade following NAFTA and China’s entry to the World Trade Organization,” he said. “Biden will be doing everything in his power to ensure that these are good-paying union jobs.”