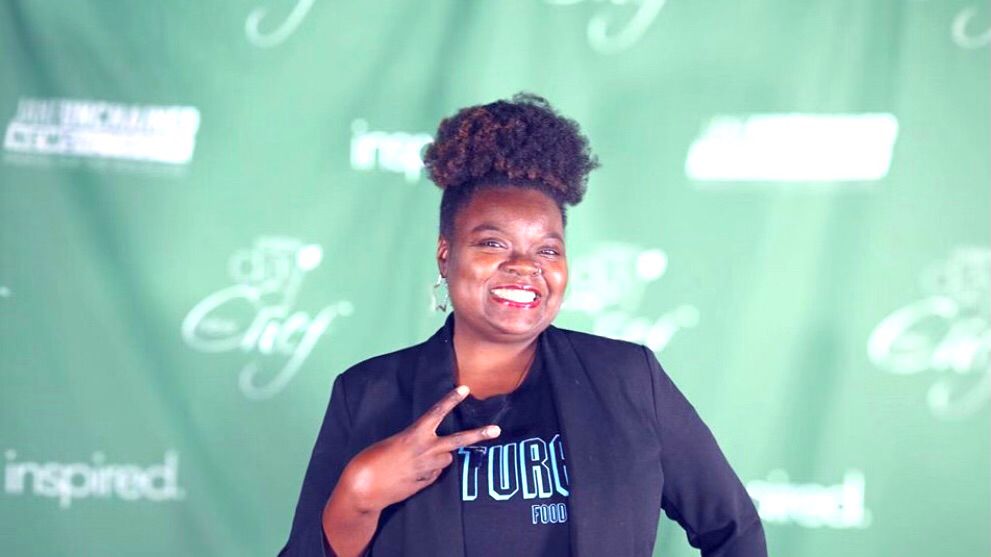 While still transitioning from being a vegetarian, in 2015 Hunter stepped into the more established and largely white vegan activist circles.

“I was doing an event with (animal rights organization) Anonymous for the Voiceless where we show the videos of what goes on in slaughterhouses. And there was a white guy, he was homeless, and young, too. He walked past me and said: ‘white power.’ This is not for me. I felt angry. And I felt too amped up. This isn’t what I want to feel,” said Hunter, founder of Vegans of LA, Vegans for Black Lives Matter, and a community leader for Vegan Outreach.

“That’s why I created Vegans of LA. I created it on Meetup.com and then moved it to Facebook. Then I started posting articles and finding my own voice.”

Despite her success hosting vegan meet-ups, Hunter felt isolated from the 1,500 vegan “insiders” following her page. “They were slamming me at every turn because I didn’t know the language.”

Understanding little-known terms such as “speciesism” is an expectation in the more rigid parts of the vegan community. Hunter’s vegan advocacy strategy was less complicated. Veganism is defined as eliminating all use and consumption of animal products to the extent that is practicable.

“I want to feed people of color vegan food for free. I want them to try it. If they knew how good it was, it might be a little easier for them to pivot into this,” she said.

While some members of traditional vegan advocacy groups, such as PETA, have been accused of being inconsiderate of non-white cultural history, African-American vegan activists are having an impact on their communities — taking cues from the people they serve.

That’s why Hunter was hired by Vegan Outreach. She initially toured throughout the South, focusing on Historically Black Colleges and Universities, handing out leaflets and talking to people one-on-one.

“It humbled my energy because I think I was turning into one of those judgmental vegans,” she said. “Then I went to a Taco Bell in the rural South and ordered a vegan taco … no dairy just make it vegan.”

The response: “Excuse me. Vegan? What is that?”

“I was shocked. It humbled me to make sure I started talking to people from where they’re at right now,” she said. “I talk about diet and pain. Black folks understand pain. They say: ‘I don’t want to cause pain.’ It doesn’t mean they’re going to take action right away, but they do.”

Many black vegans also see adopting a compassionate lifestyle as an element of their fight for justice and equity in America.

Angela Davis, longtime vegan and political activist, referred to veganism in 2016 as “one of the next major arenas of struggle.”

“Most people don’t think about the fact that they’re eating animals when they eat a steak or eat a chicken,” Davis said. “… The lack of critical engagement with the food we eat demonstrates the extent to which the commodity form has become the primary way in which we perceive the world.”

As the first months of the COVID-19 pandemic deepened food insecurity in Los Angeles, Hunter expanded her work with Vegan Outreach, connecting with Black Women for Wellness to provide food for black, LGBTQ, homeless people, single mothers, undocumented immigrants and elderly people. This year, the collaboration extended to include Black Women Farmers of LA.

Amaechina, who lives with multiple sclerosis, founded Black Women Farmers of LA, and carries her grandparents’ tradition of growing enough food to give away to neighbors and those in need into the heart of South Los Angeles. Amaechina formed the collective in 2019 as a way to unite black women she saw working in the community gardens.

“I realized if we all work together as a collective, we could grow even more. Right now, it’s six black women who garden together in order to maximize our ability to grow the type of crops that we want to give to more people in the community,” she said. “We turn one whole plot into watermelons, one whole plot — and do nothing but cantaloupes and so forth.

“We were producing so much last spring: 100 zucchinis a week, 100 cucumbers a week, 100 squash, yellow squash, crookneck squash and butternut squash — between those three, it was 100 a week. We had so much food we could just give, give, give, give. That’s how we got started.”

Amaechina’s next goal for the Black Women Farmers of LA is to acquire their own garden. Until then, she advocates for “people to start where they are. Because your vision expands pretty quickly. You tell everybody about it. And once you get really nutritious, fresh, nutrient-dense food in people’s hands and in their mouths, it is a game-changer. We have people who just are raving fanatics for our food.”

Additional information is provided by Black Women for Wellness, which was established 23 years ago.

“Our Kitchen Divas program was created to provide whole food plant-based nutrition for our communities because we know there’s a direct correlation between how we feel in our bodies and how we show up in the world, based on what it is that we’re putting inside our bodies,” said Charity Faye, one of the program directors for Black Women for Wellness.

“Rather than turn off all of South LA by saying, ‘join our vegan program,’ we commonly use ‘plant-based.’ It allows people to come into our experiences and receive the invitation that isn’t so linked with stereotypes that may often turn them away or often make them feel it’s not something affordable or sustainable for them.”

Together, Hunter, Vegan Outreach and Black Women for Wellness last year served thousands of meals and distributed hundreds of pounds of fresh produce.

Hunter is busy preparing for her next big effort: a nonprofit called The Planetary Awakening Project, focused on environmental justice issues.