Immunology may be the key to diagnosing and treating many cases of autism spectrum disorder.
By Abigail Klein Leichman May 18, 2021
Facebook
Twitter
Linkedin
Email 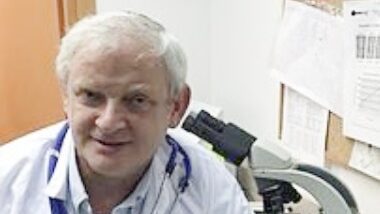 An Israeli pediatric hematologist-oncologist believes immunology is the key to diagnosing and treating many cases of autism spectrum disorder.

Dr. Benjamin Gesundheit readily admits it sounds crazy to treat a neurodevelopmental condition the way one might treat cancer.

But international reports from as early as 1962 reveal that children with autism may have autoimmune diseases in their family.

Moreover, treating autistic children for autoimmune diseases, such as asthma, sometimes results in improvement of their autism symptoms as well — typically, impaired social and communication skills and unusual repetitive behavior.

Intrigued by this anecdotal evidence, Gesundheit left his practice in 2011 to research the connection between autism and immune dysfunction.

“I sat for one year in the library to review the literature on autism and consulted people including a pediatrician who has a son with autism and asthma, and when the asthma was treated the autism lessened,” he said.

“It became obvious to me there was a connection. Many important insights in the literature and from people I knew pointed in exactly the same direction.”

His discoveries led to the 2014 founding of his startup, Cell-El Therapeutics.

Animal studies he did in Israel confirmed that autoimmune antibodies present in some mothers of children with autism spectrum disorder bind to fetal brain proteins and may be a marker or risk factor for autism.

In 2013, Gesundheit was lead author of a multinational review of epidemiological, serological and epigenetic evidence for the relationship between the immune system and many cases of autism, published in the Journal of Autoimmunity. One coauthor was immunologist David Naor from Hebrew University.

Gesundheit got Health Ministry approval to “go on a fishing expedition” for immunological biomarkers of triple-A (autoimmune antibody associated) autism in the blood of 360 autistic children, with neurotypical children as a control, aged 3 to 11.

“I asked each parent if they have an autoimmune disease, and many of them told me nobody asked them that before, but we have actually many autoimmune conditions in our family,” he said.

RayBiotech lab in Atlanta confirmed that out of 1,000 markers studied, about 30 showed significant statistical differences between autistic and neurotypical children.

Israeli biostatisticians found that in 88 percent of the more than 200 blood samples, autism spectrum disorder could be diagnosed objectively by the immune profile they identified as diagnostic markers.

“Accuracy of 88 percent is not perfect medically,” said Gesundheit. “I think the other 12 percent was not proven to have a connection because there is some other cause or because we didn’t identify all the markers.”

Still, he found the results encouraging enough to embark on developing what could be the world’s first objective medical diagnostic tool for autism.

Today, autism spectrum disorder is diagnosed by observational behavioral tests conducted by neurologists, psychologists and psychiatrists. Since these tests assess communication, they cannot be performed until a child is two or three.

“Autism was first described in 1943 and since then there hasn’t been anything significantly new to understand the disease mechanism as a basis for diagnosis and treatment,” said Gesundheit.

“The word ‘spectrum’ doesn’t tell me biologically why something in the synapses between neurons is not signaling. We have no clue and it’s a disaster. A lot of divorce, depressive disorders, unemployment and suicide surrounds families with an autistic child.”

Gesundheit will now take the five best markers from the 30 and develop them into a diagnostic blood test over the next few years. This test could be given to babies with typical early signs of autism spectrum disorder — such as not smiling or poor eye contact by six months old — to offer biological proof for observational tests done when they are toddlers. The blood tests could also be a basis for early intervention.

“If we can sort out immunological markers in the blood sample, we will enable an objective diagnosis and that is the basis of many therapeutic approaches. The diagnostic tool might be used to monitor the success of any treatment as well. This is an exciting new chapter for the world for autism.”

Cell-El Therapeutics’ other purpose is to develop an immunotherapy protocol for triple-A autism. Currently there are no FDA-approved treatments for the core symptoms of the disorder.

One promising possibility is infusing autologous stem cells (from the patient’s own cells) with mesenchymal stem cells, which restore normal immune function.

Gesundheit published a study on this and is working with medical experts in Europe who have observed remarkable improvements in autistic children following stem-cell transplants.

“I’m not sure we can target treatments to specific social or communication symptoms, but we can open an interesting avenue for future research,” he said.

“Optimal dosage, ideal age for treatment, and number and timing of treatments remain open questions for our clinical research. We do know that younger children are more responsive to immuno-modulation.”

It may also be possible to look for immunological biomarkers in the blood of mothers of autistic children and treat the mother before further pregnancies. “If we can do prevention that would be totally incredible,” says Gesundheit.

According to the World Health Organization, one in 160 children is on the autism spectrum and the numbers are growing each year.

Cell-El’s team includes two seasoned PhDs: Chief Scientific Officer Ronald Ellis, who has helped bring several major vaccines and therapeutics to the market over the past 35 years and Fred Samuels, head of diagnostics, who has 35 years of senior management experience in commercializing diagnostic products.

The Swiss-born Gesundheit (whose name is German for “health”) previously worked at the Hospital for Sick Children in Toronto and at Soroka and Hadassah medical centers in Israel.

Gesundheit also heads a startup called Rapo Yerapeh that’s investigating the use of oncolytic viruses to treat metastatic tumors, and he is researching an existing antiviral as a treatment for Covid-19.

For information on another subset of autism discovered at the Israel Center for Autism Research, click here.

A diagnostic tool that treats autism like cancer appeared first on ISRAEL21c.