K.P. Sharma Oli was sworn in as PM days after losing the vote of confidence as the nation struggles to treat rising Covid cases.
By Ramu Sapkota May 17, 2021
Facebook
Twitter
Linkedin
Email 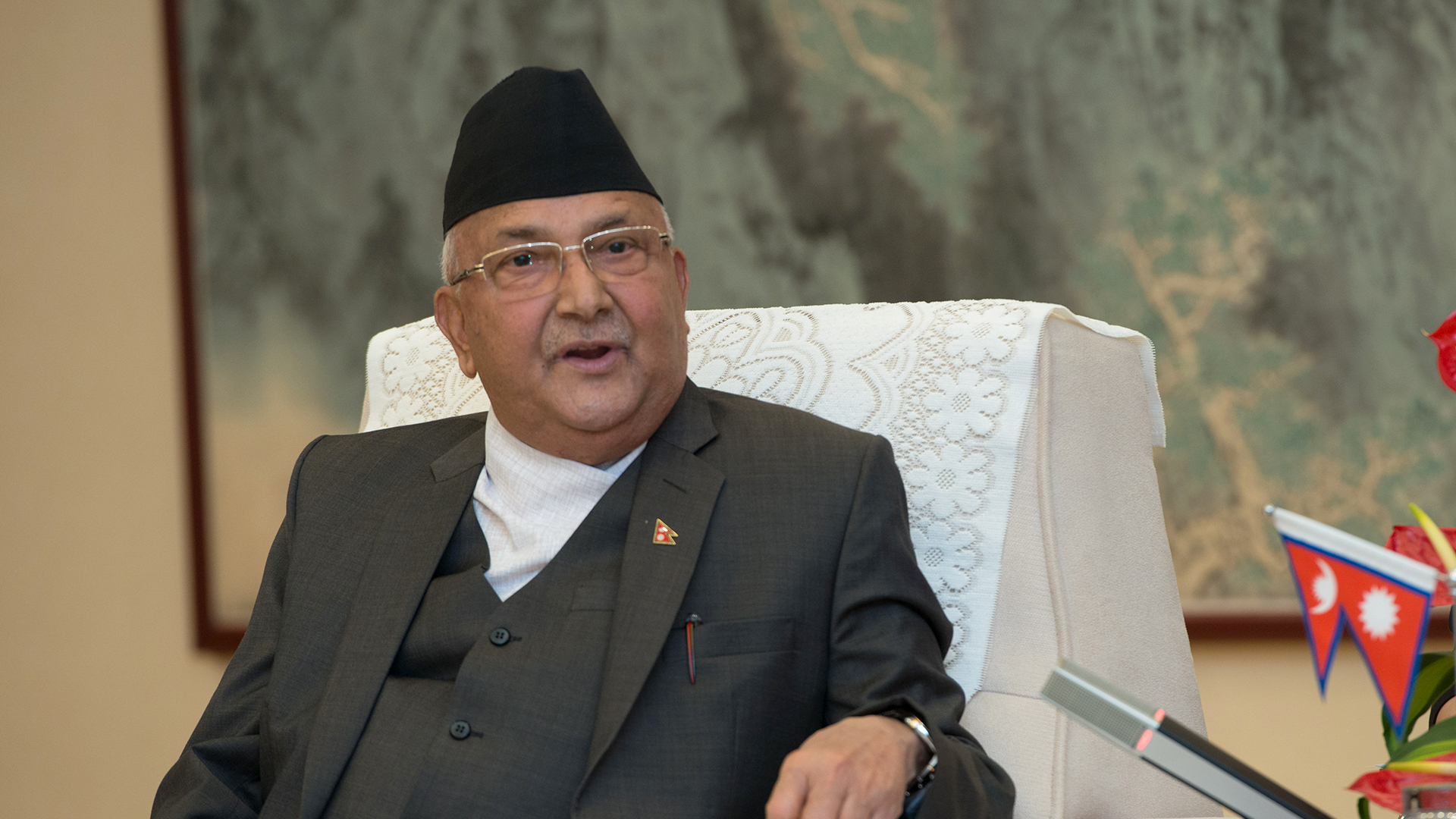 KATHMANDU, Nepal — Nepal, the South Asian Himalayan nation famed for being home to the tallest mountain peaks globally, is in a state of turmoil. There has been a massive surge in Covid-19 cases as the government struggles to keep itself in power.

The incumbent Nepalese government led by Prime Minister K.P. Sharma Oli failed to secure a vote of confidence on May 10 as per Article 100 of the country’s Constitution in the House of Representatives, when 93 members voted in favor of him, and 124 members voted against him.

Following Oli’s defeat, President Bidya Devi Bhandari called on the parties to stake their claim for the formation of a government. When no party was able to do so, Oli was once again appointed the prime minister. 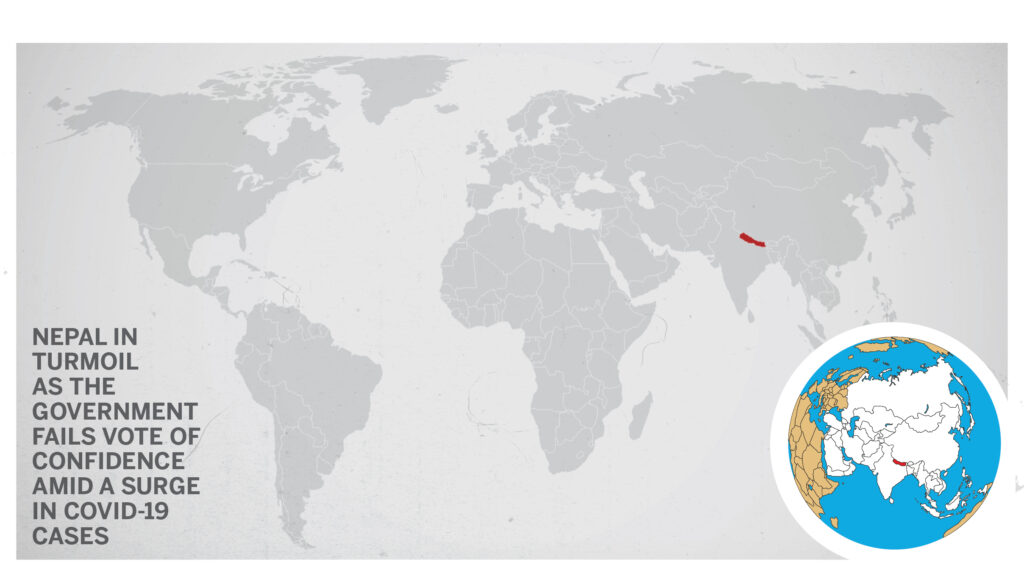 As per Bhattarai, Oli was appointed the prime minister Article 76 (3) of the Constitution as the leader of the largest party in parliament with 120 seats and formed a minority government.

Oli has 30 days to prove his majority in the parliament, else the president will call for the formation of a majority government.

Oli lost the vote after different political factions within his party, the CPN-UML, led by Madhav Kumar Nepal and Jhala Nath Khanal, did not vote for him.

Some political analysts suggest that Oli did not get the votes of the members of parliament from the other faction due to the political infighting and power struggle within the party. They believe it will be difficult for Oli to secure a majority.

“Looking at the rift within the party, it seems unlikely that Oli will get a vote of confidence, and a majority government will be formed under the leadership of someone other than Oli,” political analyst Shiva Gaunle said.

Bipin Adhikari, a senior constitutional lawyer, told Zenger News Oli had sought a vote of confidence from parliament to go to the polls.

Oli had dissolved the parliament on December 20, 2020, and political instability resurfaced in Nepal.

Similarly, the principal Opposition Nepali Congress and other parties also rallied in large numbers on the streets to protest against the government. To counter the opposition’s narrative, Oli and his supporters organized a nationwide rally and public.

Then, on February 23, 2021, the Supreme Court restored the dissolved parliament.

Adhikari, who is also an advocate, said Oli should have resigned on moral grounds after the Supreme Court’s decision, but he did not.

“A majority government is unlikely to be formed after about a month, and the country will go to mid-term elections,” Hari Roka, a political analyst, told Zenger News.

The political turmoil came amid the nation going on a red alert due to rising Covid cases.

The Nepal Medical Association declared a nationwide “red alert” on May 12 and said Nepal’s condition was serious.

“The government, all political parties, civil society, and all professional associations, brothers and sisters, are warmly appealing to all to join the battlefield and provide support and goodwill to break the Covid-19 epidemic,” the association said in a statement.

In Bhaktapur, a city in the eastern corner of Nepal’s capital Kathmandu, Shiva Basnet’s 52-year-old wife was diagnosed with a common cold on April 30. She was treated for a common cold at home, but had difficulty breathing the next day.

She tested Covid-19 positive soon after. Basnet immediately sought a hospital with an ICU bed but could not find one.

“We cried for two days when we couldn’t find an ICU bed. My wife was suffering because she didn’t get treatment on time,” Basnet spoke of his ordeal to Zenger News.

His wife was then taken to the Ganeshman Singh Hospital in Lalitpur, the third-largest city. However, her relatives could not find a bed till evening, when she was finally treated in the emergency unit. She was diagnosed with oxygen deficiency.

“We had the money, still did not get an ICU bed and treatment on time. It feels like we were born in a country without a good leader,” Basnet said.

Political analyst Roka said the Oli-led government failed to control the Covid-19 infection and the treatment of patients.

Some analysts believe political tussle has pushed the country further into crisis at a time when it needs better management of oxygen treatment for Covid-19 and subsequent vaccination drives.

Scenes on the ground show the Covid-19 patients were suffering due to lack of timely medical treatment, while some were dying without treatment.

As per the ministry, close to 3 million were vaccinated with the first dose by April 30. And 362,001 people with the second dose.

Jageshwar Gautam, the ministry’s spokesperson, said all major private and government hospitals were running at full capacity with Covid-19 patients.

Some private hospitals in Kathmandu issued statements saying they cannot admit more patients due to a lack of beds with oxygen.

“In the background of having scarcity of oxygen in the country and according to the government policy of providing only 100 cylinders per day, we regret to inform you all that we are unable to admit new Covid-19 patients in the hospital,” tweeted Grande International Hospital in Kathmandu on May 11.

On the same day, Chandramani Adhikari, the Shahid Gangalal National Heart Center executive director in Kathmandu, said the “country’s health system has collapsed due to the high number of Covid-19 infections, and the government has failed to manage the situation”.

Prime Minister Oli told an international news organization on May 8 that the “Covid-19 situation was under control”. But in another piece in a British newspaper, he urged the international community to help Nepal by providing vaccines.

Oli was criticized on social media for his claims that “the situation was under control”.

As cases continued to rise in the country, Oli organized a religious gathering in Baluwatar, a residential locality in Kathmandu, on April 20 in the name of “Sita Ram Shobha Rath Yatra Foundation Ceremony”, where a crowd of more than 25 people had gathered.

The previous day, on April 19, a cabinet meeting chaired by Oli had set a standard of not allowing more than 25 people to gather due to the risk of Covid-19.

At the same time, thousands of worshippers attended the “Kumbh Mela” in India, which also contributed to the surge in cases. Former Nepal King Gyanendra Shah and Queen Komal Shah tested positive after returning from the “Kumbh Mela”.

Anup Bastola, the chief consultant of Sukraraj Tropical & Infectious Disease Hospital in Kathmandu, told Zenger News Nepal did not have many skilled and trained doctors for lung-related diseases, and most of the hospitals do not have the necessary infrastructure either.

“The government should buy ventilators and oxygen from the suppliers and distribute it to the hospitals,” Bastola said. “It can reduce the risk of death to some extent.”