Renewable energy projects — such as a huge solar farm being built in Texas — are expected to provide much of the increased demand.
By Terry Alan Lane May 17, 2021
Facebook
Twitter
Linkedin
Email 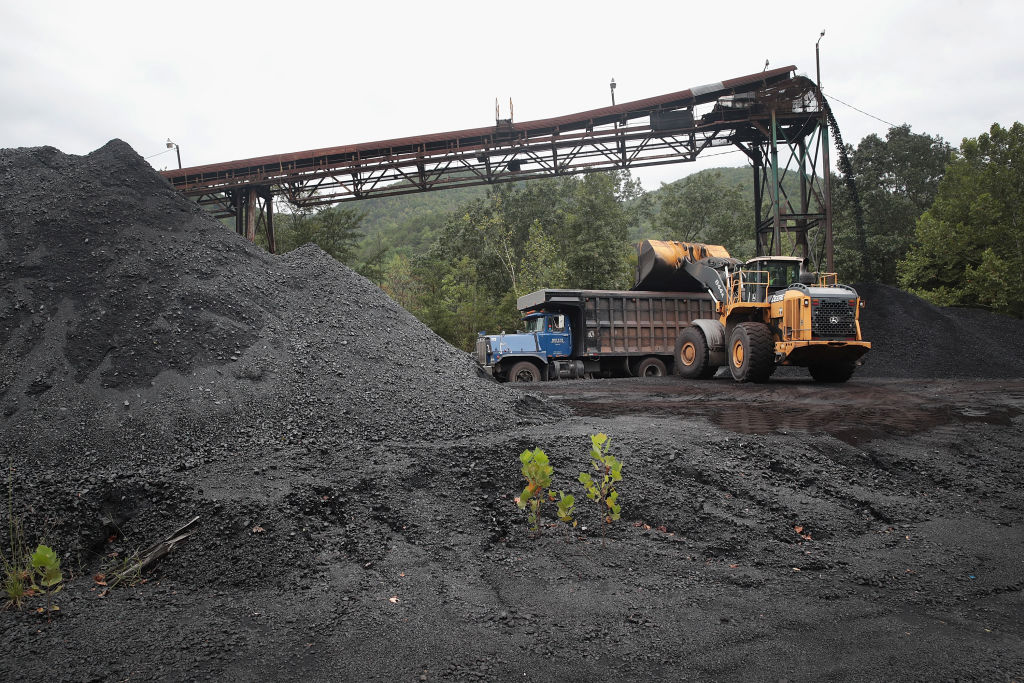 A truck is loaded with coal at a mine on August 26, 2019 near Cumberland, Kentucky. Eastern Kentucky. (Photo by Scott Olson/Getty Images)

With lockdowns and travel restrictions ending, the American economy is expected to consume more electricity this summer, government officials forecast, coming after recent spikes in power demands have caused blackouts in states like Texas and California.

To meet the anticipated 1.5 percent increase in demand nationwide, utilities will rely more on renewable energy and coal, as rising costs of natural gas are expected to cut into its use as a fuel to generate electricity for the grid, the U.S. Energy Information Administration said last week, in a forecasting report.

Electric utilities around the country will increase coal use by 18 percent, the report found, while turning to renewables for a 21 percent increase. Natural gas, by contrast, is expected to suffer a 12 percent decline in use this summer. 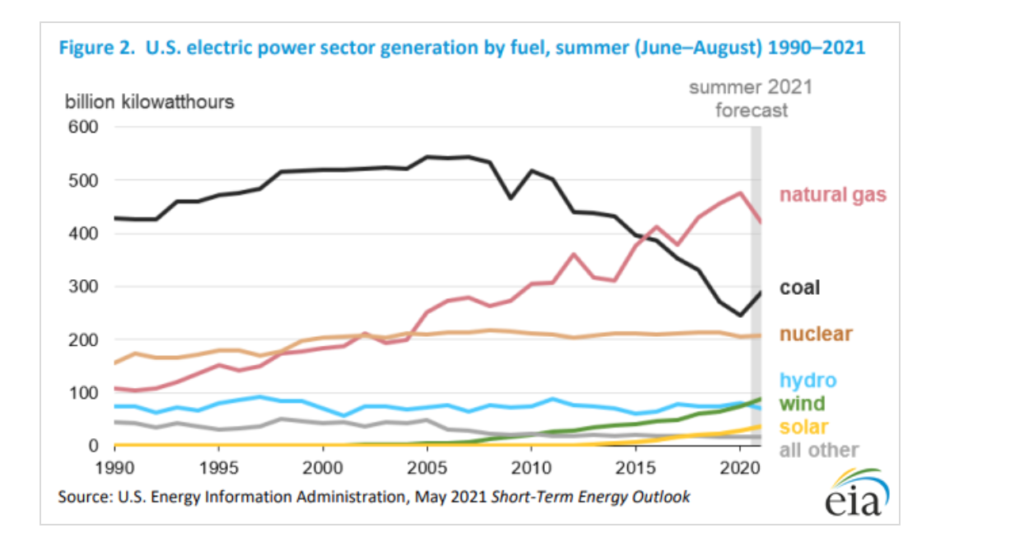 Along with the increase in coal use — the first such boost since 2009— the federal energy forecasting also showed the stronger demand electrical generation would lead to increased coal production.

As for renewables, no state is set to adopt more such power to meet the demand than Texas, despite some questions as to whether the failure of renewable energy resources contributed to blackouts across the state during a February winter storm.

“We believe renewable sources will primarily make up for the decrease of natural gas usage in Texas,” said Energy Information Administration Acting Administrator Stephen Nalley. “Our forecast is that 28 percent of Texas’s electricity demand will come from renewables this summer, up from 21 percent in 2020.”

The jump in U.S. demand will come in the industrial sector, which is forecast to use 4.5 percent more electricity this summer, along with a 2.6 percent jump in sales in the commercial sector, the federal energy report showed.

With a forecast of milder summer weather, along with fewer travel restrictions, residential electricity use is expected to decrease this summer, dropping 2.5 percent. However, the estimated usage for summer 2021 is still higher than the 2015-2019 summer average, the administration said.

“Increased electricity use will be most notable in hotels, restaurants, and other businesses that faced major hurdles in 2020 due to stay-at-home orders,” Nalley said.

The U.S. jump in electricity usage mirrors worldwide trends. In 2020, global electricity demand fell by about 1 percent, the International Energy Agency said in an April report, with the first half of the year seeing the biggest drop in demand.

Advanced economies are expected to see a 2.5 percent growth in demand for electricity, with the international energy figures forecasting the U.S. demand to jump 2 percent in 2021. Increased energy use will also likely lead to increased global carbon dioxide emissions, the group’s head said.

“Global carbon emissions are set to jump by 1.5 billion tons this year, driven by the resurgence of coal use in the power sector. This is a dire warning that the economic recovery from the COVID crisis is currently anything but sustainable for our climate,” said Fatih Birol, the International Energy Agency’s executive director. “Unless governments around the world move rapidly to start cutting emissions, we are likely to face an even worse situation in 2022.”

The forecast comes on the heels of cold winter temperatures in February that caused blackouts on Texas’ electrical grid. However, Texas Gov. Greg Abbott is assuring business leaders that his state’s electrical grid will be able to handle future weather events. (California, another renewable energy leader, has also experienced blackouts driven by the strains of summer heat.)

“We are not going to end this legislative session without ensuring that all the laws are passed that needed to be passed to ensure that we never go through an episode like this again,” Abbott told the Texas Economic Development Corp. in April. “With so many people moving into Texas and with so many businesses coming here, there’s going to be future demand for more power than what we are currently generating. That is why we will not leave this session without passing legislation to ensure we have sufficient power generating capacity for all the businesses that are moving here.”

Long known as a national leader in petroleum production, Texas is seeking similar status in renewable energy, as well. A recent report  from the American Clean Power Association showed that Texas not only led the way in making the move to wind power in 2020, but also in solar power.

Specifically, the Lone Star State installed nearly three times the amount of wind power as the next-leading state, Iowa. Meanwhile, Texas also set the pace for solar power production in 2020, installing 2.8 gigawatts, ahead of the 1.7 gigawatts each for sunshine-rich California and Florida.

One reason that Texas has built a robust renewable energy sector is the state’s “renewable portfolio standard,” which is a policy that requires utilities to include renewable energy resources as part of their portfolios of energy- generation infrastructure. First enacted in 1999, Texas was one of the first states to adopt such a policy, enacting it before another renewable energy leader, California.

“Texas also has the advantage of having good resources. The panhandle is very windy, as are the coastal areas, and there’s plenty of sunshine for solar,” said John Hensley, vice president of research and analytics at the clean power association.

While Texas has an abundance of wind power available in its north and west — in areas dubbed “Competitive Renewable Energy Zones” — it needed to move that electricity to its population centers in Dallas, Austin and other areas. To do so, the state built more than 2,300 miles of high-capacity transmission lines.

Meanwhile, Texas will also soon house the nation’s largest solar farm. Construction of the Samson Solar Energy Center began in June 2020 and it’s slated to become fully operational in 2023. A $1.6 billion capital investment, the complex is expected to generate 1,300 megawatts of energy in Northeast Texas, enough to power roughly 300,000 homes.