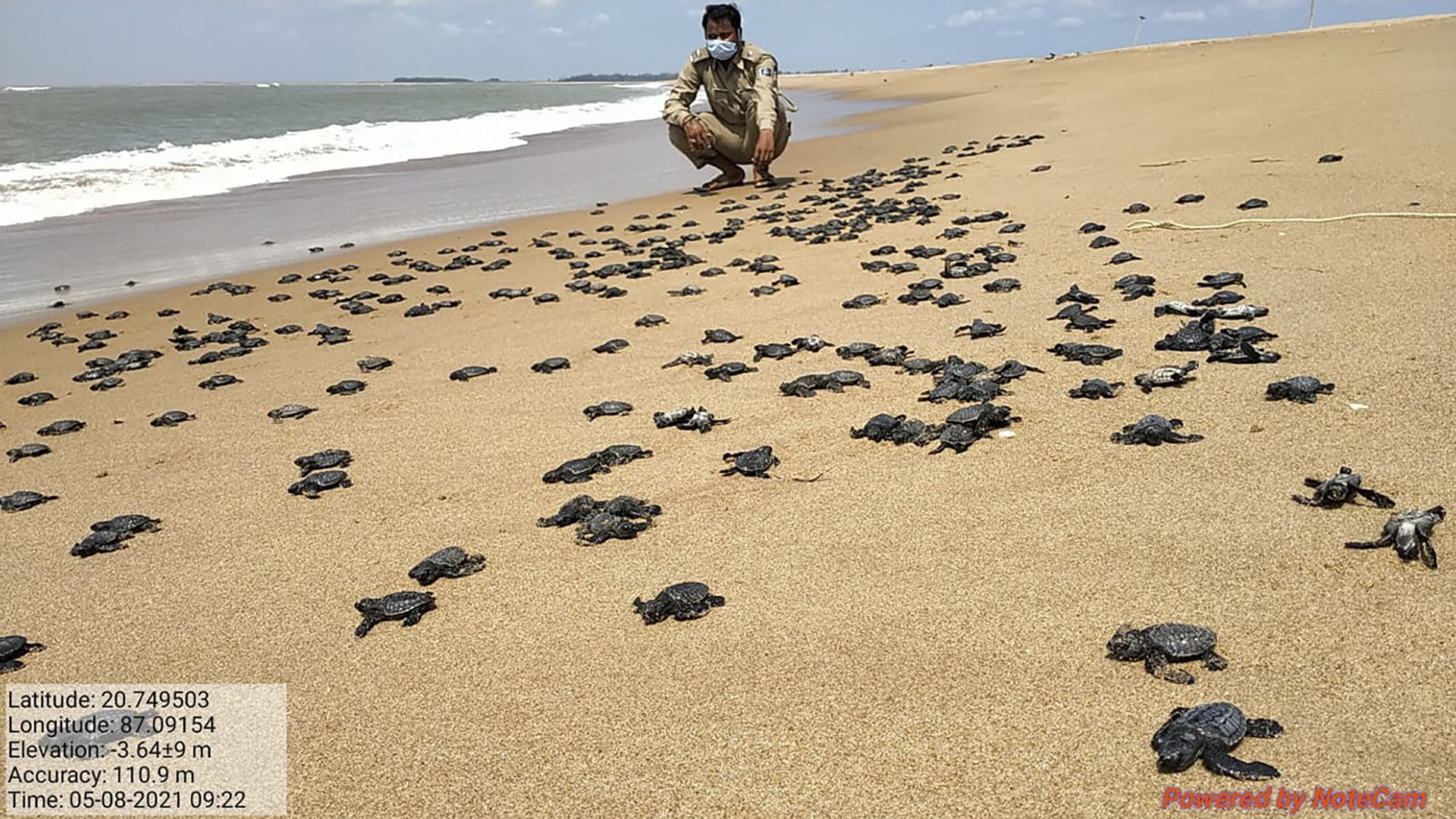 The hatchlings started to appear at the Gahirmatha beach in the eastern Indian state of Odisha on April 25. (Bikash Ranjan Dash)

KOLKATA, India — Around 14.8 million baby turtles of the vulnerable Olive Ridley turtle species have hatched at the Gahirmatha beach in the eastern Indian state of Odisha.

The beach, which separates the Bhitarkanika Mangroves from the Bay of Bengal, is the largest mass nesting site for the Olive Ridley globally, followed by the coasts of Mexico and Costa Rica.

“The entire process starts from November and continues up to May. Olive Ridleys start congregating in the nearby sea areas in the mating season, usually November-December. After mating in shallow waters, the males return to the deep sea, and the females stay there.” 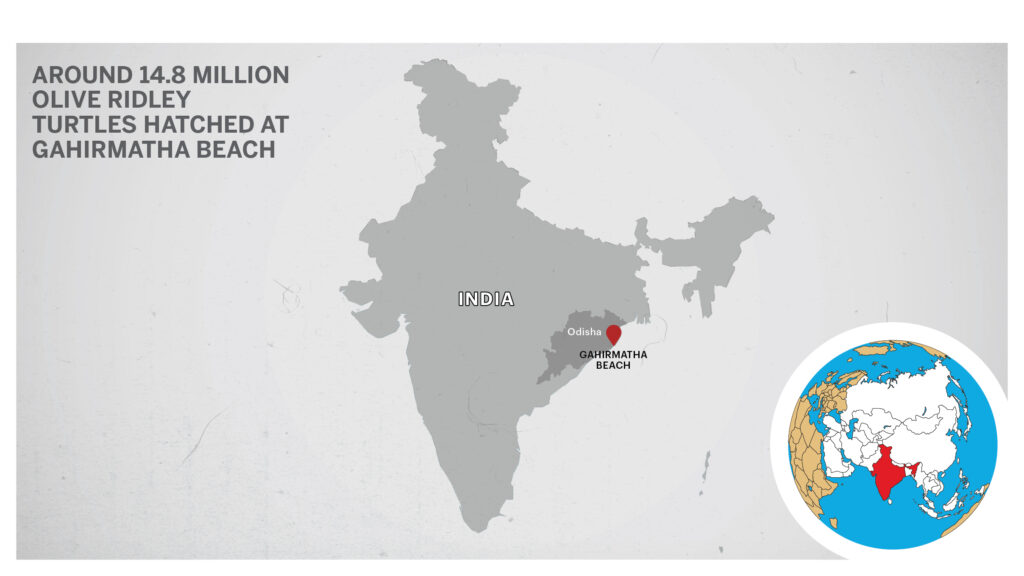 He says female Olive Ridley turtles come up to the beach for mass nesting from late February to early March. Timing depends on the sea and weather conditions. After laying the eggs, the females also return to the deep sea.

“The beach is situated close to an adjacent defense installation at the Dr. Abdul Kalam Island [earlier Wheeler Island]. Hence, there was proper vigilance for the safety of the baby turtles.”

“The hatchlings started to appear on April 25, and the process has now come to an end. After coming out of the nests, the newborns roam around the beach for hours before starting their journey towards the deep sea,” Dash said.

“Mass nesting is when more than 10,000 turtles come to a shore for hatching eggs,” Satyaranjan Behera, zoologist, Odisha Biodiversity Board, told Zenger News.

“Every Olive Ridley turtle lays 100 to 120 eggs on average. The incubation period for these turtles ranges from 45 to 60 days. They prefer staying in mud and eat mollusks from the sea bed.”

Behera believes the actual number of hatchlings in Gahirmatha could be slightly different as it is impossible to count all turtles. “Many eggs turn out to be unfertilized, which prevents them from hatching,” Behera said.

Olive Ridley turtles are also known as Pacific Ridley sea turtles and the most abundant sea turtles found in the world.

“They are found in the Pacific Ocean and the Indian Ocean and spotted in the warm waters of the Atlantic Ocean,” said Behera.

“Most of their population resides on the coast of Sri Lanka as the food they eat is more easily available there than on the Indian coast. However, they travel around 1,000 kilometers [620 miles] to breed and nest their eggs.”

Behera believes the Olive Ridleys do not go for mass nesting in Sri Lanka due to a lack of security.

“This species is very particular about the place they are laying eggs. If they are not satisfied with the wind conditions, they might not lay eggs. Most of the reptiles have egg retention capacity. At times, they digest eggs for want of suitable conditions to lay them.”

“The flora and fauna of Gahirmatha island are unique,” said Prasanna Kumar Nayak, an Odisha-based researcher in plant taxonomy.

“There are certain aquatic plants here, which the turtles feed off. The wind and climatic conditions are perfect for wildlife existence. The island has a mixture of almost all kinds of plants.”

On the Odisha coast, about 16,000 fishing boats operate during winter. Some 8,000 of these boats are large mechanized fishing trawlers and gill-netters that flout laws prohibiting mechanized fishing within 5 kilometers [3.1 miles] of the shoreline.

Turtles are injured by the boats’ propellors and slaughtered in the fishing nets — a total of 100,000 dead turtles have washed ashore in the past decade, almost all of them breeding adults.

“It is a tragedy with irreversible implications,” said Belinda Wright, executive director, Wildlife Protection Society of India. “No species can survive such high mortality of its breeding populations.”

However, to ensure the safety of these turtles from these threats, the government has declared Gahirmatha island a no-fishing zone. It has installed a net cover along the beach to keep predators away.

“The forest personnel maintained a distance so that they do not scare the turtles,” said Dash.

“Fishing trawlers is a punishable offense in this area, and our team maintained continuous vigilance for six months to keep predators away from the turtles.”

Gahirmatha island was declared a turtle sanctuary in 1997 by the Odisha government after considering its ecological importance and as part of efforts to save the sea turtles.