The 66-million-year-old creature could be an ancestor of the world’s ‘most dangerous bird.’ 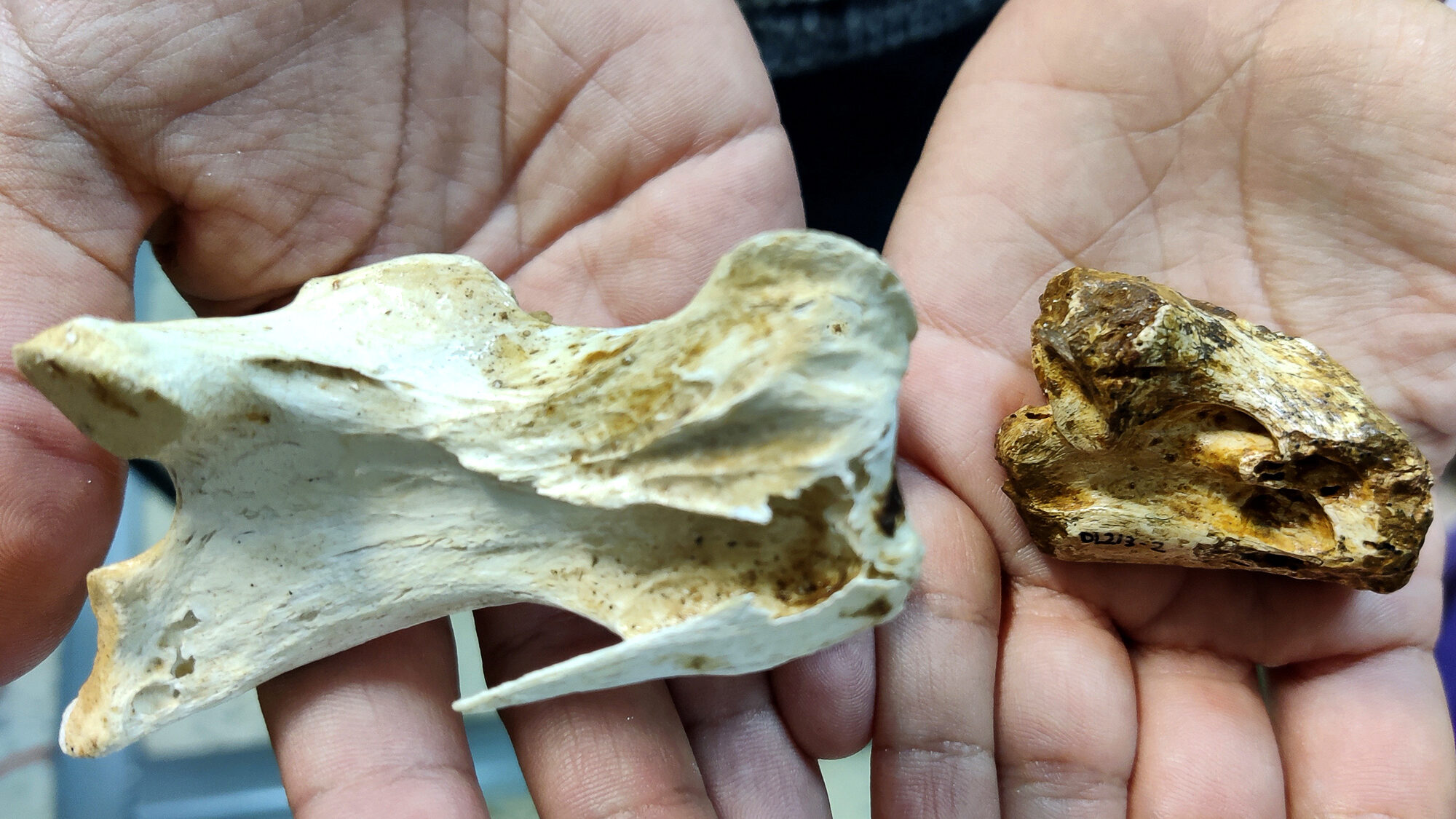 Vertebrae of a current ostrich (left) and that of the dinosaur bird found in Biascas de Obarra, Spain. (Manuel Perez/Real Press)

Scientists have used a single vertebra to identify a new type of giant bird that became extinct with the last of the dinosaurs 66 million years ago.

The size of the vertebra — around 2.7 inches (7 centimeters) — shows it was tall with a long, flexible neck, said Manuel Pérez-Pueyo of the University of Zaragoza, lead author of a research paper about the bird. He compared it to a cassowary, a large flightless bird native to Papua New Guinea and Australia and described as the world’s most dangerous bird.

The bird likely coexisted with the last of the European dinosaurs until the Cretaceous-Paleogene extinction, when 75 percent of all species, and all dinosaurs, died out. The event has been blamed on global environmental destruction caused by a giant comet or asteroid that slammed into the Gulf of Mexico.

The fossilized remains of the bird’s vertebra were found in 2009 at the Tremp Formation, a geological site in the Catalonian Pre-Pyrenees area of northern Spain. The formation has been the site of many paleontological discoveries.

Now, researchers have completed their analysis of the bird, which was 5 to 6 feet tall.

The fossil was found in a rock dating to the end of the Cretaceous period,” said Pérez-Pueyo.  The research was recently published in the Journal of Vertebrate Paleontology.

“We are talking about hundreds of thousands of years before the meteorite fell to earth and caused the massive extinction,” said Pérez-Pueyo. “There were no giant birds registered in Europe at that time. There are other birds found in Europe, but they are older than this one.”

Comparing the bone with other vertebrae of theropod dinosaurs and birds, both living and extinct, confirmed it belonged to a bird, though a more primitive specimen than current animals.

“It represents a new species, but with only one bone, it cannot be known for sure,” Pérez-Pueyo said. “It is better to wait for more discoveries. We have more questions than answers after the discovery of this fossil.”

A CT scan of the fossilized vertebra at the National Centre of Investigation into Human Evolution showed it had a hollow structure with multiple cavities and wall cavities, similar to modern birds.

“It would not be from the same group of current birds, but it would be close in evolutionary terms,” Pérez-Pueyo said.

More bones from the bird are needed to determine whether it was able to fly. However, Pérez-Pueyo said: “It could not dive because it had hollow vertebrae, and diving birds like penguins fill those gaps in the bones to help them submerge, as the skeleton needs to weigh more.”

He said the bird had feathers, a feature that is not exclusive to birds, as some dinosaurs at the time also had them. The bird “is contemporaneous with herbivorous dinosaurs like sauropods, or long-necked herbivores, and hadrosaurids, or duck-billed dinosaurs.”

Many dinosaurs lived in the area now known as the Pyrenees, but 66 million years ago, the landscape was totally different.

“The Pyrenees did not exist at that time. The sea level was higher, part of Europe was flooded, the Iberian Peninsula was an island in the archipelago and the Pyrenees had not risen yet,” he said. At the time, there was a giant valley in what is now the Cantabrian Sea, and there were no mountains. The valley was full of bays and rivers influenced by the tides.

The environment was more humid than now, and more tropical, so it was perfect for those animals, Pérez-Pueyo said.

Scientific analysis of the fossil remains continues, and archaeologists are exploring the discovery site in the hope of uncovering more information.