No one in a village in Madhya Pradesh has taken a jab amid misinformation that vaccines are killing people.
By Mayank Jain Parichha May 16, 2021
Facebook
Twitter
Linkedin
Email 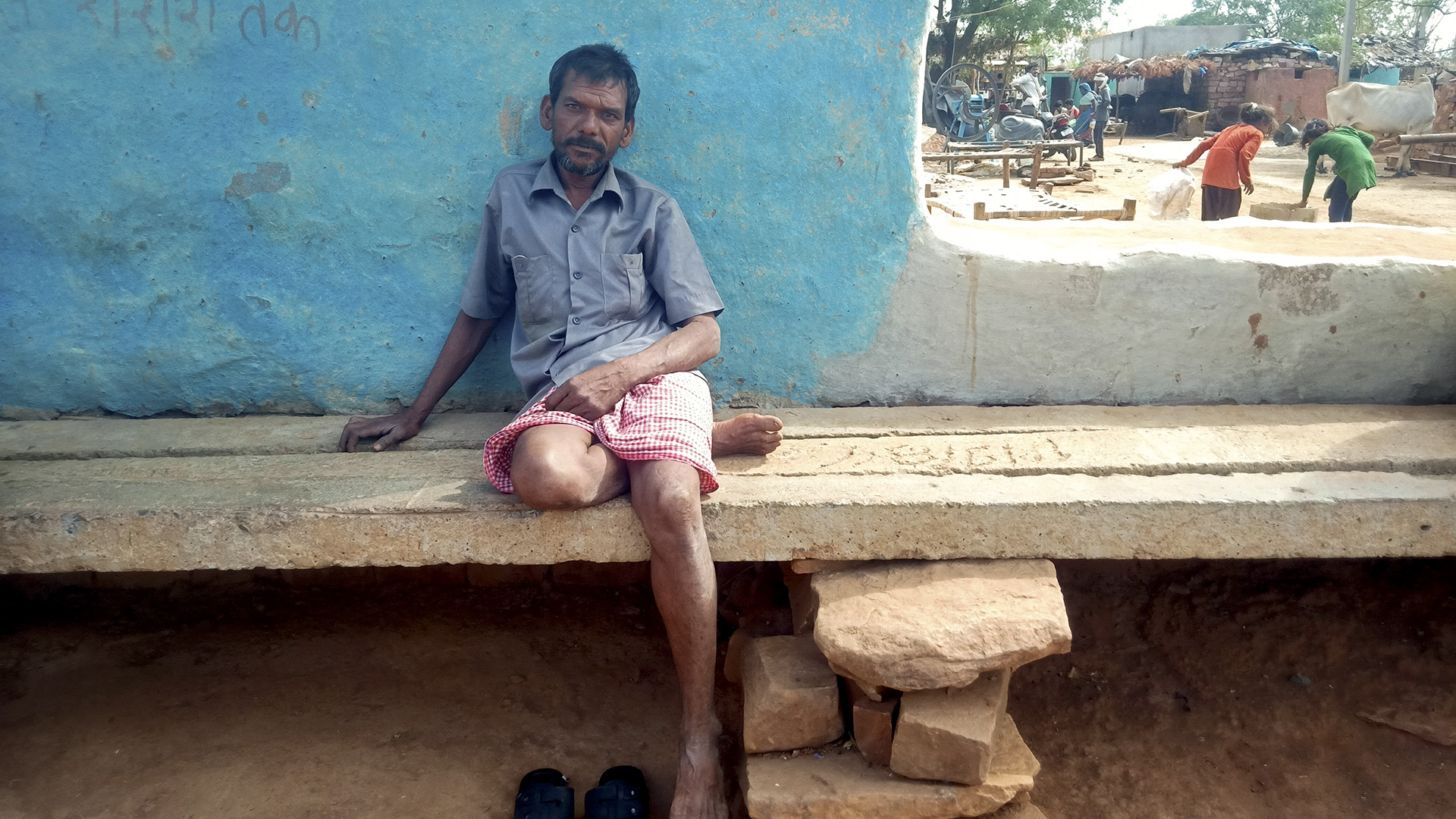 BEELBARA KHURD, India — 52-year-old Kanhaiya Lal Sahariya does not want to get a Covid-19 vaccination.

“People die after taking the Covid-19 vaccine as it’s poisonous,” Kanhaiya Lal told Zenger News as he sat on a bench in his Beelbara Khurd village in the Shivpuri district of India’s central state of Madhya Pradesh. “I am not going to take it.”

“I don’t have any disease. Why would I take it? Anganwadi (rural health care) workers came here for vaccinations, but nobody turned up.”

He said that if someone forces him to take a vaccine, he will hit that person. 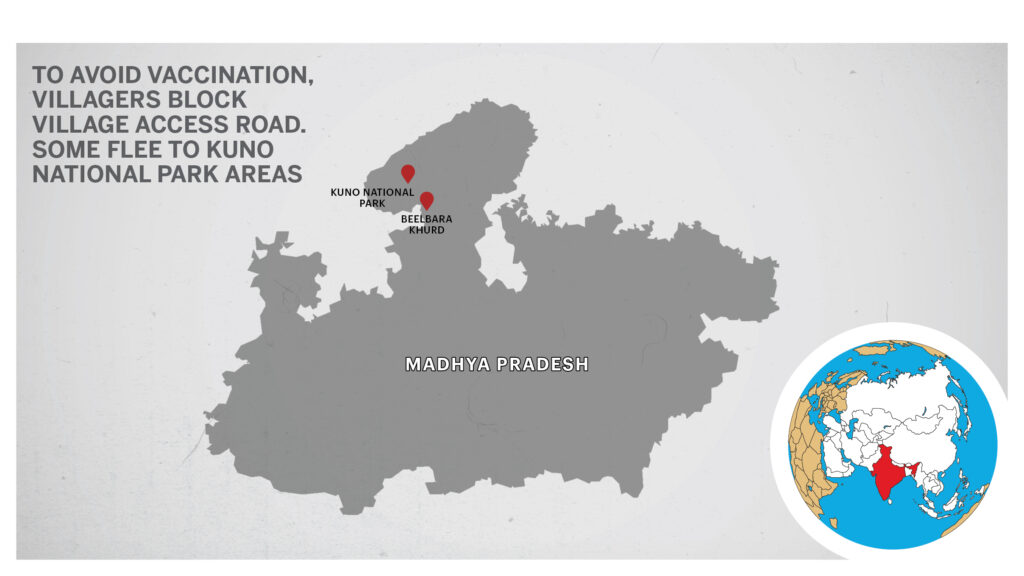 No one in his village has taken a jab so far as they believe vaccines are killing people, not the disease. The fear is stemming from misinformation linked with some unfortunate deaths after vaccination.

“An 85-year-old woman died in Bamra [a nearby village],” 70-year-old Ram Bharosi Sahariya from the same village told Zenger News. “If not vaccinated, she would not have died.”

“People among us die for no reason. Why would we take vaccines to die?”

Beelbara Khurd is predominantly a Sahariya village, with 400-odd inhabitants.

The Sahariya tribe lives in acute poverty. Premature pregnancies, malnutrition, and stunting are prevalent. “The Saharia tribe probably suffers the highest known tuberculosis prevalence as a subpopulation globally,” according to The Lancet study published in December 2019.

The study notes that “the structural and unique cultural barriers faced by tribal populations, especially Saharias, make it a huge challenge for India’s program to bring down the tuberculosis prevalence”.

Members of the community are primarily agricultural laborers. But, many livelihoods depend on seasonal migration. They go to places like Agra, Gwalior, and Jaipur to harvest wheat and potatoes.

This migration and reverse migration have brought Covid-19 to the village, but no one is “Covid positive” yet because of a lack of testing. The nearest testing center is at least 10 kilometers (6.2 miles) away.

Some from the village have started working for nearby crematoriums, raising the risk of a quicker spread of Covid in the community.

“We are working here for food,” Meena Bai, a Sahariya woman from a nearby village in her late 40s working for a crematorium at Shivpuri, told Zenger News.

“We don’t have any other option. Everything is shut. Where will we go if we don’t work here?” Meena earns a mere INR 150 ($2) per day for collecting wood for funerals. Her face was covered with the hem of her saree.

When asked about whether anyone in the village had taken vaccines, the village head of Beelbara Khurd, Makhan Adiwasi, got angry and said: “We all are vaccinated; you go back from here.”

Deepak Sharma, a panchayat secretary (village level officer), told Zenger News that vaccine hesitancy is there in almost every village.

“It will require extra effort to vaccinate them,” Sharma said. “Due to the misinformation, they get violent when someone asks them to get vaccinated.”

Akshay Kumar Singh, the district magistrate of Shivpuri, denied that Sahariyas resorted to any violence regarding vaccinations.

“I visited these villages with the Superintendent of Police,” he told Zenger News. “Proper communication improves a lot of things.”

“We are going to Saharia villages. If they collect [people] in good numbers, we can have vaccination camps in these villages,” he said.

But villagers have put a wood log at the village entrance to halt the entry of officials.

And, some people from nearby villages like Sikandarpura, Patha, Laxmanpur, including some Sahariya families, vacated their residences and migrated near the Kuno river, where the protected areas of the Kuno National Park lie, so that officials would not approach them.

“I saw some Sahariya families came here a month ago and have been staying here since then,” Mulayam Yadav, a worker at the Kuno National Park, told Zenger News.

“Once, a vaccination drive was going on at Chandanpura village. The Sahariyas thought that a team was coming to vaccinate them, so they ran to the jungles and returned in the evening,” Sharma said.

Immunization programs have practically stopped in most villages after the second wave hit as vaccines are in short supply. Even as Covid-19 is now sweeping the hinterlands of India, a majority of the people there haven’t been inoculated.

India opened vaccination for all over the age of 18. But slots are given through an online portal that many don’t have access to or are not comfortable with yet. Internet penetration in India is at 45 percent.

“Firstly, we don’t have enough vaccines. Secondly, we have set a platform where 70-80 people feel disadvantaged in getting a slot for vaccination. Even in the U.S., it is pen and paper. I don’t think there is any reason for us not to do so.”

“Health is very personal and very local. Public health is essentially about customizing. We have to learn and keep on adapting.”

“There needs to be targeted, community-based channels as we did to fight polio. It is doable, and India has done it before. We need an equity-based vaccination policy.”

It is uncertain when the government will vaccinate the villagers of Beelbara Khurd. After reporting over 270,000 Covid deaths, the government came up with standard operating procedures on May 16 for Covid-19 containment in peri-urban, rural, and tribal areas.

Tribals account for about 8.6 percent of India’s 1.3 billion population.

Bhaumik believes it seems logical for a community to think of not getting vaccinated when they have not observed cases of the disease. “Why would they try a new thing? So, we require a good community-based intervention to communicate the importance of the vaccination.”

Moreover, most villagers rely on quacks, who don’t have many qualifications for medications.

“Special efforts need to be made to reach out, in terms of availability and accessibility, to all marginalized communities, including particularly vulnerable tribal groups,” Dasgupta told Zenger News.

“Vaccine hesitancy is understandable and needs to be addressed with a deeper understanding of their specific concerns.”

“Practitioners of traditional systems of medicine, as well as informal practitioners who are well accepted by local communities, need to be roped in to act as ‘bridges’ between the vaccination program and marginalized communities. These steps are central to vaccine equity.”