Mobile phone app can lock, unlock and even start your car.
By Aadhityan A May 15, 2021
Facebook
Twitter
Linkedin
Email 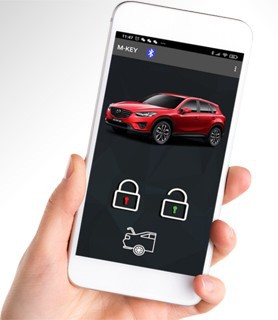 Misplacing (or losing) car keys is a common first-world frustration. Cobra, an Israeli maker of automotive safety devices and door-locking systems, has a solution for drivers: Mobile-Key, a virtual car key operated remotely from a mobile app (Android or iOS).

An electronic control unit installed beneath the dashboard interacts with the mobile app via Bluetooth and allows car owners to unlock their vehicle’s doors, open the trunk, flash the lights and start the car, all without a physical key.

The phone must be approximately 50 feet from the vehicle. For peace of mind, Cobra uses 256-bit encryption to foil potential car-hackers.

Using a mobile app to start your car is not unique — Tesla, Hyundai, Honda, Subaru and Nissan have similar features, and CarChabi and MoboKeyoffer remote unlocking apps. Google and Apple are both reportedly working on their own digital car keys as well.

But Cobra’s aftermarket addition of an electronic control unit means it can be used in cars that are already on the road. (One caveat: the technology currently works only with cars that use buttons to start up, a fairly common feature since 2014.)

The Mobile-Key app can be shared by five users, including fast setup appropriate for valet parking staff. Mobile-Key does not disable a car’s standard key or button, so drivers without the app can still get into their cars.

Cobra claims it takes just 60 minutes to install the device and connect it to a vehicle’s electrical system. The installation can be done at a mechanic, dealership or even at home. Cobra is suggesting a retail price for Mobile-Key of NIS 1,190 ($365). Replacing a lost car key, by comparison, can cost between $300 and $1,200.

“It’s a convenient and accessible solution that will undoubtedly save the forgetful among us a lot of money on duplicating keys,” the company states.

Cobra has already been using tech smarts to unlock doors to homes — its DOORe product uses fingerprints to eliminate the need for house keys.

The company’s vehicle-related products include navigation, entertainment and communication systems, front and rear cameras and various parking sensors. The company is an independent contractor for Delek Motors in Israel.

CEO Yuval Asaraf said Cobra aims to launch its product in the next three months in the United States, followed by Europe. The company plans to collaborate with corporate fleets, vehicle importers and car-rental companies.