New biotech will help farmers across Asia, Africa, and the Americas to cut investment in pesticides to control the pest. 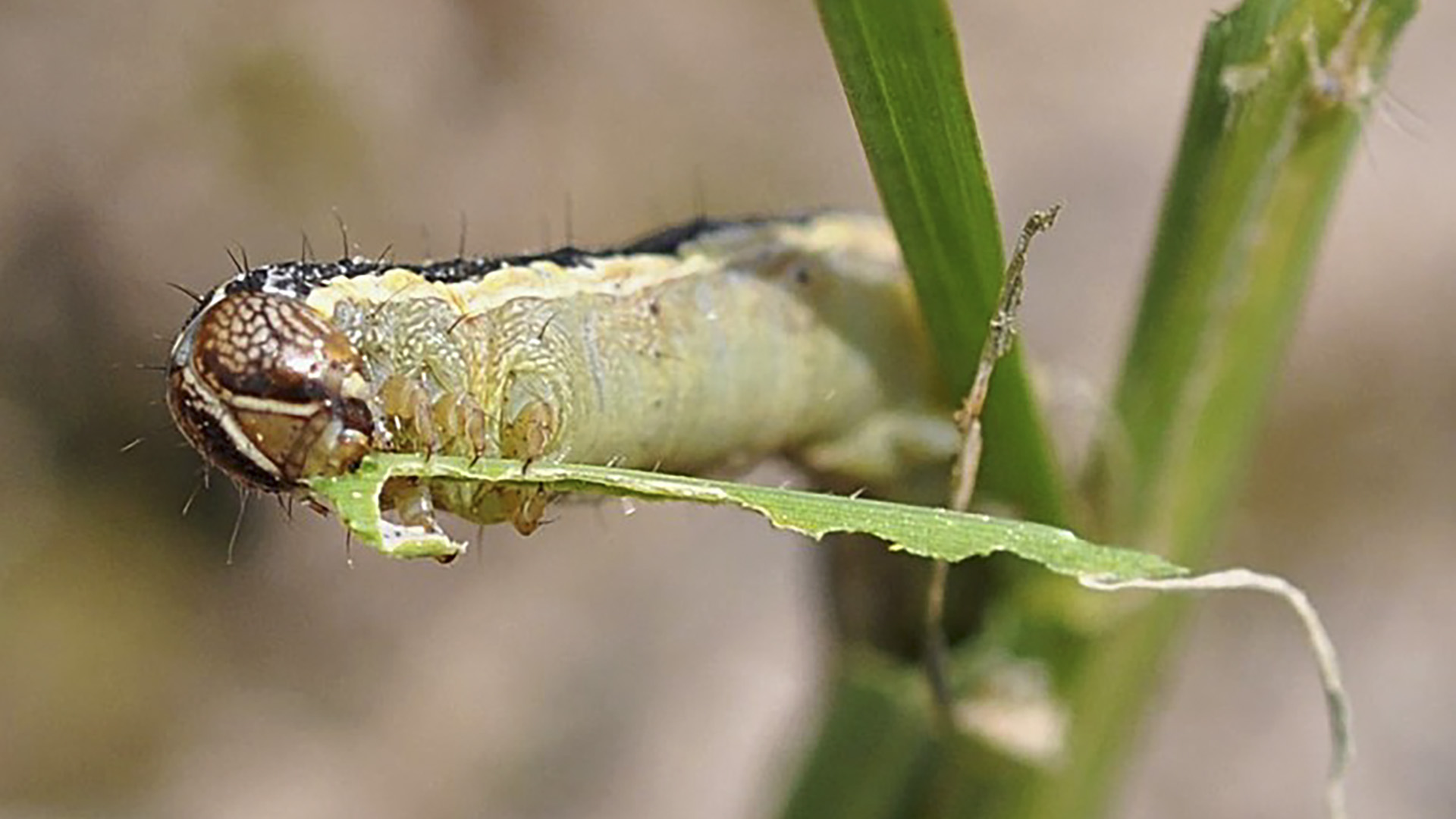 CHENNAI, India — The genetically modified fall armyworm, a pest that has invaded farms across Asia, Africa, and the Americas, has been developed by U.K-based biotechnology firm Oxitec to reduce the species’ population.

The fall armyworm, or Spodoptera frugiperda, is a lepidopteran pest belonging to the family of butterflies and moths. It feeds on leaves, stems, and the reproductive parts of plants.

The pest is causing significant damage to economically important cultivated grasses like maize, rice, sorghum, sugarcane, and wheat, along with 75 other crop species.

Oxitec is collaborating with Bayer, a German multinational pharmaceutical and life sciences company, for the technology. 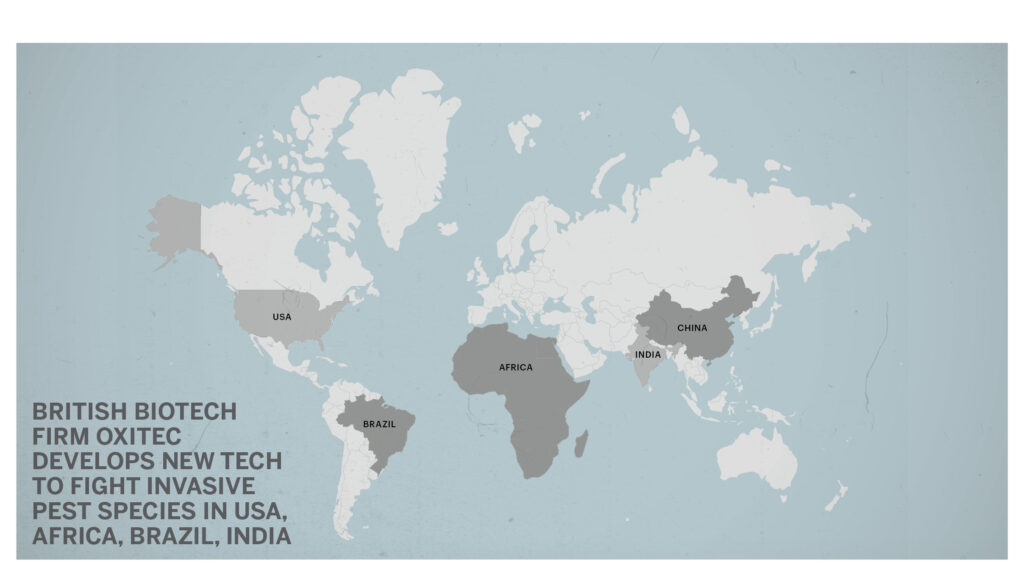 “The collaboration between Bayer and Oxitec in the development of a ‘friendly’ fall armyworm explores a promising new approach to support integrated pest management, helping farmers manage destructive pests more sustainably while reducing the need for other inputs,” said Bob Reiter, head of crop science research and development at Bayer.

Hundreds of millions of farmers will benefit if the technology succeeds.

Brazil’s biosafety regulatory agency, CTNBio, has approved the company’s genetically modified fall armyworm branded as Friendly™ and permitted the deployment of this solution on commercial crops.

“Brazilian regulators have determined that Friendly™ is safe for people, animals, and the environment,” Neil Morrison, head of agriculture programs at Oxitec, told Zenger News.

Native to the subtropical regions of the Americas, it has become a major invasive pest, especially for maize.

While the U.S. and Brazil — the major corn producers globally — are facing attacks from the native fall armyworm, several countries are managing the attacks through integrated pest management approaches­.

But, in the recent past, fall armyworms have developed resistance to pesticides, creating headaches for farmers.

The pest is highly reproductive and spreads quickly. It spread to Africa in 2016 and 2017, wreaking havoc on maize crops in 12 countries and caused severe food insecurity with a sharp reduction in yield.

It was first detected in India’s southern state of Karnataka in June 2018 and has spread throughout the country.

India, traditionally a maize exporter, had to import the crop in 2019 and 2020 after fall armyworm attacks and extreme weather events destroyed maize crops. In India, the pest also feeds on sugarcane, sorghum, pearl millet, cotton, and other cereals.

“In the agriculture sector, this is the most notorious pest reported across the world,” Bhagirath Choudhary, founder-director of the South Asia Biotechnology Centre, told Zenger News. The New Delhi-based non-profit organization promotes biotechnology in agriculture.

“This pest has the same appetite what we observed in cotton pest, also known as bollworm, in 1980-the 90s. Since we controlled it, we have never seen such pest in agriculture.”

In 2020, Delhi and the adjoining northern states Punjab, Haryana, and Himachal Pradesh reported the pest.

It also spread to China in 2019. However, it is unclear how the magnitude and distribution of threats vary between Chinese provinces.

“Underdeveloped provinces might be more vulnerable to fall armyworm in relative terms and more likely to be a major fall armyworm source.”

The feeding caterpillars of the pest cause billions of dollars of crop damage and losses. In 2017, the annual economic fallout from fall armyworm damage in 12 African countries was estimated to be as high as $6.3 billion.

The Food and Agriculture Organization (FAO) of the United Nations estimates that farmers spend $600 million annually to control the pest, yet it still causes annual losses of $400 million.

Existing solutions and the new tech

In December 2019, FAO launched the pioneering Global Action for Fall Armyworm Control as an urgent response to the rapid spread.

In one meeting in April, FAO urged scaling up of successful demonstration done under Global Action effort. FAO has chosen “eight demonstrations” countries as hubs for Global Action­ — China, India, and the Philippines in Asia; and Egypt, Burkina Faso, Cameroon, Kenya, and Malawi in Africa.

To stem the attacks from the destructive pest, farmers started investing more in environmentally harmful insecticides.

“Additional spending of farmers increased by around by INR 10,000 ($135) per hectare due to overuse of chemical pesticides,” Honnur Prakash, a farmers activist in Karnataka’s Chamarajanagar district, where fall armyworm was first detected, told Zenger News.

But widespread use of chemical pesticides has its limitations.

“Fall armyworm caterpillars are usually found in corn whorls. They are nocturnal as they come out in the night to devour crops. So, the efficacy of chemical insecticides largely depends on timing,” said Choudhary.

The technology works by releasing Oxitec’s Friendly™ male moths, which find and mate with pest females.

“The offspring inherit a self-limiting gene that is only active in females, therefore preventing them from surviving. With regular releases of Friendly™ males, the number of females in the next generation is reduced, leading to a sharp decline in the pest population,” said Morrison.

“Our technology potentially reduces the need for additional pesticides in the long term. Besides reducing populations of the pest, it also has the potential to slow the resistance development to insecticides and biotechnology enhanced crops,” Morrison said.

Though the technology manufacturers claim it to be some revolution, environmental groups warn about its unintended consequences on the environment.

Oxitec had introduced genetically modified mosquitoes to control its population, but the technology came under sharp criticism from environmental experts.

An experiment has been started in Florida, U.S., this month. It will release male mosquitoes that transmit a self-limiting gene to female offspring, which will die before achieving maturity.

“Oxitec’s technology is complementary to current practices but not intended to stop the use of harmful agrochemicals,” he told Zenger News.

Shylesha detected fall armyworm in India during field research with S.K. Jalali, principal scientist and head of the division of genomic resources, in Karnataka, in 2018.

“The Indian government would certainly give serious thought when any proposal comes to them from these companies as it is mostly meant for genetically modified crops that we do not grow. This technology may also create potential insecticide resistance in the fall armyworm,” said Shylesha.

Shylesha’s organization has instead come up with environmentally friendly techniques to manage fall armyworm.

“There is a bio-control technology that we have developed which uses pathogens, predators, parasites to control fall armyworm,” said Shylesha.

“We have developed lots of feasible and environmentally friendly options to control the pest, but the agrochemical lobby is pushing their chemicals-led solutions. We don’t have a mechanism to spread our bio-control measures to control fall armyworm among farmers.”