The Tragic End Of An Endangered Whale Shark In Cameroon 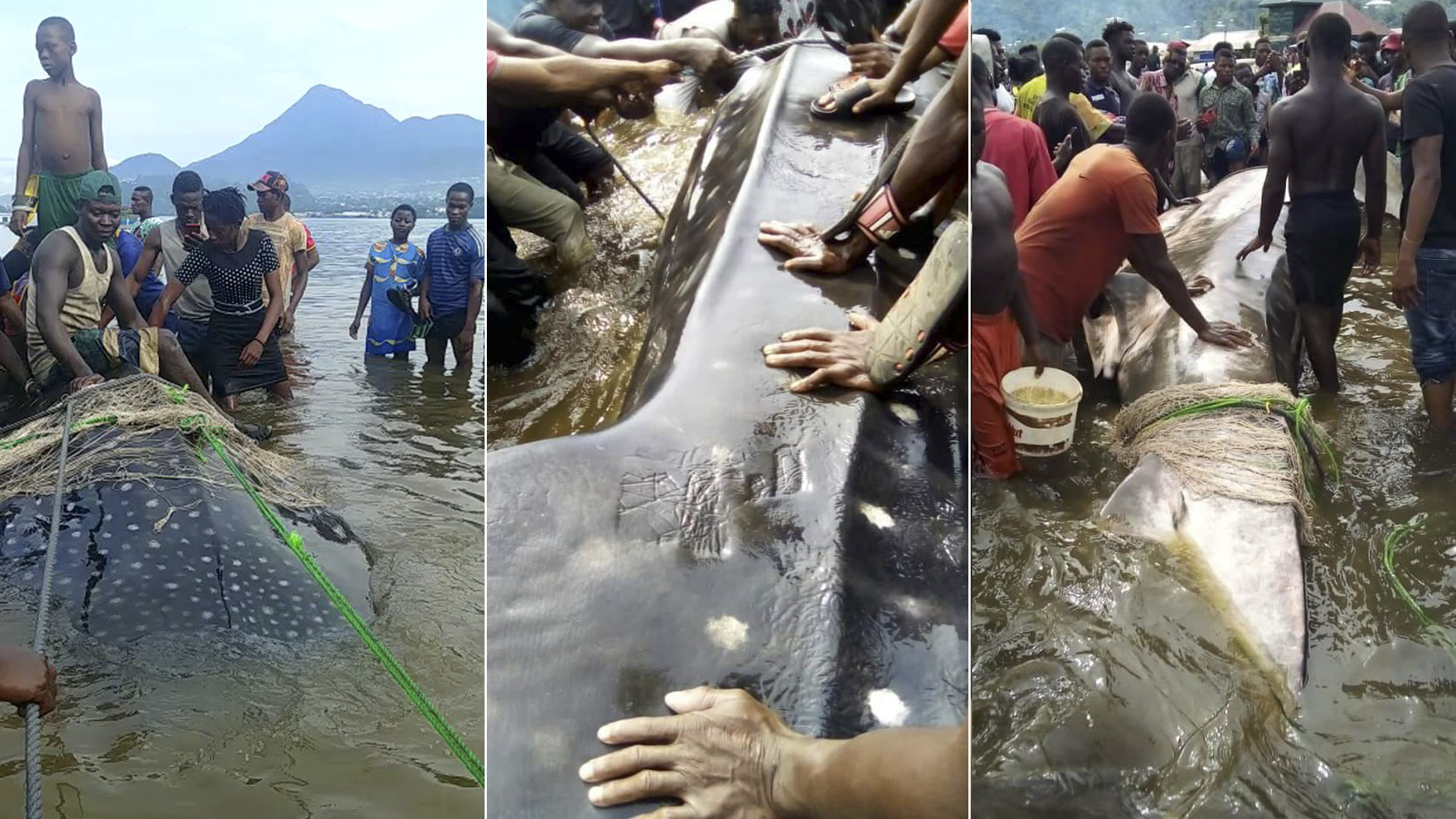 Anxious villagers engaged in pulling the whale shark to the shore. (AMMCO)

LIMBE, Cameroon — In what reads like a modern reenactment of Ernest Miller Hemingway’s 1951 short novel masterpiece, “The Old Man and the Sea”, a fisheries graduate in Cameroon has recounted how he recently caught a giant whale shark and dragged it ashore—where it was quickly butchered for meat by locals.

“I was not expecting it,” Ashu Charles Okuk, 34, told Zenger News. “I was so much afraid when I pulled my net and instead saw a mighty fish. The shark was still alive in my net, breathing normally. I tried to let it go, but the fish was completely entangled in the net, which was wrecked,” he said.

The unusual catch happened on April 21, 2021, on Cameroon’s Atlantic coast. 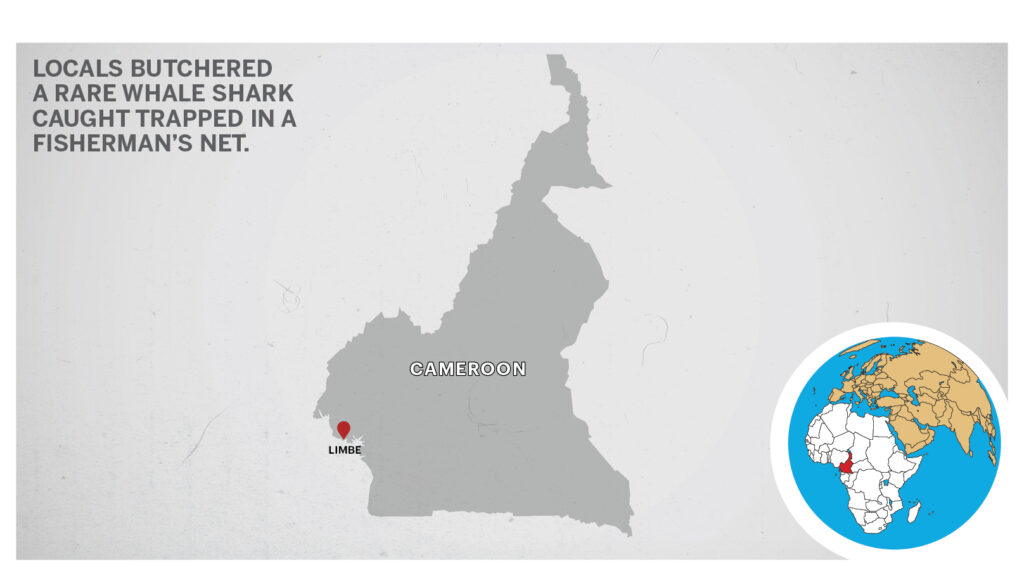 “It took me a lot of time to tie the fish on my boat,” he said. “I almost sank when trying to bring it to the shores. Other fishermen had to come and assist me with their boats. As we dragged it along, it kept pulling us back,” he said.

But unlike in Hemingway’s story where Old Man Santiago’s exhausting efforts were in vain as sharks scavenged his big marlin catch before reaching ashore, Okuk dragged his shark to Limbe Down Beach, where it was quickly scavenged by thousands of locals on arrival.

“If I allowed the fish to go, what would be my benefit?” said Okuk. “That is why I decided to pull it to the shore. The shark was not my target. If I discover a whale shark in my net in the future, I will only let it go so long as my net is not destroyed. But if it is, then I will pull it down again.” He said he bought the net for $2747.19.

The giant female whale shark weighed more than two tons with a length of 7.8m (25.5 feet), according to the African Marine Mammal Conservation Organization.

Officials from Cameroon’s fisheries ministry and the police arrived at the scene just too late to prevent people from killing the shark.

“By the time I arrived at the scene, the fish was already dead, so there was no need to push it back into the ocean,” said Lucy Egbe, the Regional Delegate of Livestock, Fisheries, and Animal Industries in the South West Region of Cameroon.

“We recovered just about a quarter of the whole fish; that is about 500kg (a half a ton). The ministry officials instructed that the remainder to be sold, and the money given to the young fisherman whose net was destroyed by the shark,” she said.

Fishery experts said it is likely the shark met its untimely death while looking for food or mates.

“Mammals, Cetaceans (or species of fish) at a certain period migrate from one area to another either for nutrition or reproduction,” said Matah Nadege Virginie, a Cameroonian fisheries engineer.

“It could also be due to climatic challenges. Marine turtles often come and reproduce around the Batoke areas on Cameroon’s coast and migrate back to the high seas. Therefore, this incident could recur. There is a need to study the situation scientifically and provide a suitable solution,” she said.

Marine conservationists and biologists condemned the killing of the fish.

“The fact that the fishermen caught it, brought it back to the land, and killed it means the fishermen have not been sensitized about our wildlife,” said Kiyang John, a wildlife veterinarian in Cameroon.

“The grievous error of the government is when people come out of a fishing school, and they don’t know anything about wildlife. So, what did they learn in school if the first thing they do when they graduate is to kill a rare fish?” he said.

His sentiments were echoed by Aristide Takoukam Kamla, a marine mammal biologist and founder of the African Marine Mammal Conservation Organization.

“Fisheries need to be regulated in Cameroon,” said Kamla. “Fishermen have to be aware that when they capture this type of threatened animal, they should do everything to release them back into their environment. It is not the only species facing accidental catch along the coast of Cameroon. We have, for instance, the rare East Atlantic pygmy devil ray and the hammerhead shark, which are frequently being captured despite the fact they are highly threatened.”

Kamla said that no sharks and rays are legally protected in Cameroon, even though some have been classified as threatened on the International Union for the Conservation of Nature red list.

But Egbe said sharks are considered endangered species in Cameroon and protected under the country’s 1994 wildlife law.

“I warned the fishermen that if in future they catch these species and kill, they will be fined or penalized,” she said. The fine is between $1831.46 and 5494.38. “We always sensitize fishermen about the protected and the endangered species,” she said.

Kiyang said the butchering of the whale shark in Limbe is one too many for conservationists.

“If our wildlife is being caught and killed in this way, then before long, we will have nothing to count on. Because when animals are in the wild, the ecosystem is balanced. If the wildlife is destroyed, repercussions will be felt by human beings as well,” he said.

(Edited by Kipchumba Some and Sarika Kumar. Map by Urvashi Makwana.)