Millions of Chileans withdrew money from their pensions, and protested to demand changes.
By M. D. MacKinnon May 13, 2021
Facebook
Twitter
Linkedin
Email 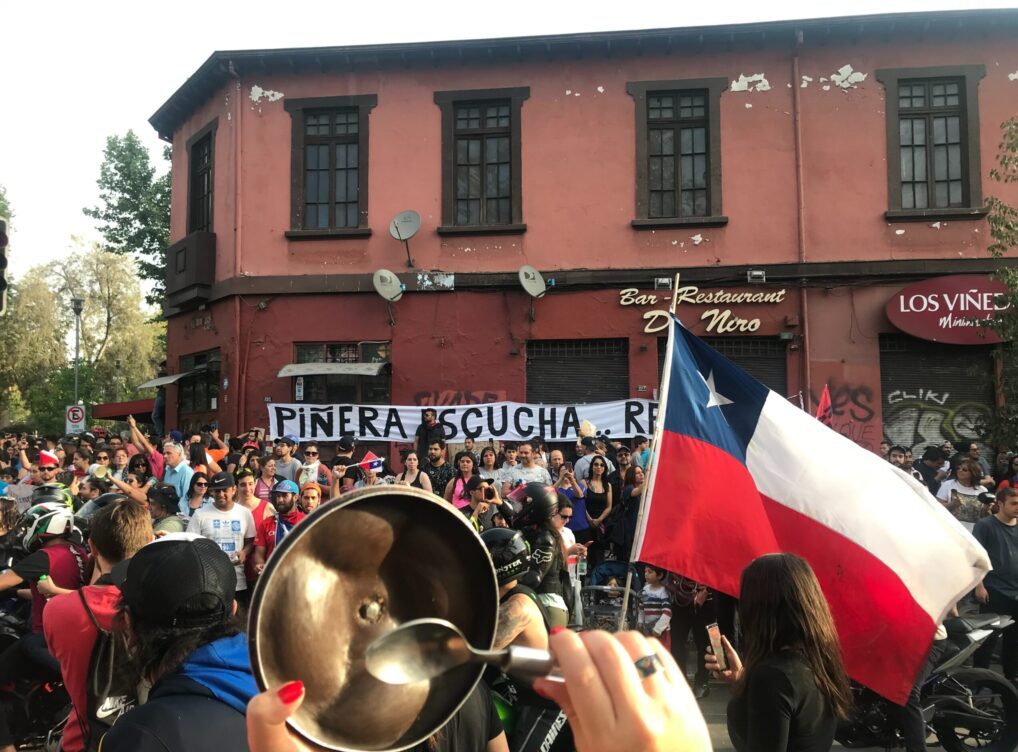 Protests against the government of Chilean President Sebastián Piñera broke out in October 2019, and led to the drafting of a new Constitution, which is in process.(Guido Coppa/Unsplash)

TALCA, Chile — The Chilean pension system marks its 40th year with a crisis that threatens its existence.

On May 15 and 16, Chile will hold an election that could determine its future. The 155 delegates who will write the new constitution are up for election. The process will last one year, and then there will be another election to approve the new text. Pensions are a major issue tied to the process.

The early red flags about the world’s first private social security system appeared in August 2016, when economist José Piñera gave an interview to Televisión Nacional de Chile, the country’s public channel. Piñera, who created the full-capitalization system, said Chilean pensions worked well and delivered high payments. But many citizens who received pensions for an average of $400 per month thought otherwise.

A non-governmental organization called No Más AFP organized a demonstration in March 2017 that brought together 800,000 citizens in Santiago and 2 million more in the rest of the country.

The unrest led the Chilean congress to order Pension Fund Administrators (PFA) to return $37 billion to citizens, among other measures intended to calm the population, in October 2019.

“The Chilean private pension system does not serve as a means of social protection, neither in Chile nor in any part of the world, because it is a private insurance system (that follows the logic of commutative justice: so much I contribute, so much is my coverage) with a pension financing structure (for old age, disability and survival). It only secures meager pensions, even for those with the highest incomes,” said Carlos Rivadeneira, a lawyer and researcher in social security law.

The current president of Chile is Sebastian Piñera, José Piñera’s younger brother, and he is the main shareholder in two PFA companies: Planvital and Habitat. Many Chileans consider this a conflict of interest, as the president might be defending his commercial interests in the pension funds.

Currently, the PFAs control $200 billion accumulated since 1980, when José Piñera was minister of labor and social security for the military junta led by General Augusto Pinochet.

There is another point of conflict: while civilians are obliged by law to deposit their money in a PFA, the 175,000 members of the military and the police have their own pension system that is financed with a deduction of 1 percent of the country’s GDP.

The pension system “is an excellent business for the economic groups that own the country. With the workers’ contributions, they secure liquid money to invest in their businesses,” said Rivadeneira.

“They make lots of money with the investments and, if there are losses, the workers lose because their contributions to the pension funds are the ones invested. It is their money that shrinks. Whether the pension funds have profits or losses, it doesn’t matter. The PFAs win regardless because they always charge a commission. It is legal fraud,” he said.

One of the leading experts in the PFA system is Gino Lorenzini, the director of a company called Felices y Forrados, which advises 200,000 subscribers on pension issues. The company will not continue operating after June of this year, due to a new law that forbids an individual or company from giving financial advice, under penalty of jail and a significant fine.

Lorenzini presented his candidacy to become one of the 155 delegates to be elected this weekend, but the electoral service rejected it.

“Historically, there have been two pension systems: the pay-as-you-go system and the individual capitalization system. Pay-as-you-go systems will be underfunded in Europe in this decade because they work in a pyramid scheme that is collapsing due to demographic changes,” he said.

Capitalization systems work well when the administrator seeks the best relationship between risk and return. However, when the administrator has perverse incentives, and the funds lose money without any punishment — due to the power of vertical integration between PFAs and insurance companies — the problem of low public trust in the PFA system arises, said the expert.

Lorenzini believes trust is key to any system, “and today in Chile there is a scenario of populism that could lead to a return to a pay-as-you-go system, which would be a huge mistake, or the system could evolve breaking down conflicts of interest and promoting the existence of 20 PFAs to create greater competition.”

“In this way, people could benefit from profitability, improving pensions, but at the time of death, the loan goes back to the state, with profits. The idea behind the system is that the state would invest in its happy children, lending them 3,000 dollars at birth.”

As an example, Lorenzini explains that “if a person dies before age 65, the state recovers the loan plus the profits. Those who live 85 years benefit from the profits earned between the ages of 65 and 85. Upon death, the state automatically recovers its investment multiplied several times with the accumulated profits up to the age of 65.”

“Since the beginning of the pandemic, the current pension system has suffered unimagined blows,” said Santiago Rosselot, an economist with Fundación Sol, an NGO working on labor, education and pension issues.

“People have made withdrawals that have put an end to the notion that the money in the individually funded accounts is untouchable. However, the money has helped workers pay for the crisis with their own savings, transferring significant amounts of resources from the PFAs to households.”

He believes that change is imminent.

“In this context, and projecting more withdrawals in the future, it is difficult for the PFA system to continue operating in the same way. The current system was imposed during the dictatorship. It does not have social legitimacy, and people understand it as a central element of the Chilean neoliberal model against which society exploded in October 2019. The current system failed. It provides insufficient pensions and finances large economic groups. We hope it can change,” he said.

Chileans voted last year to create a new constitution to replace the one that gave the government so much power at the end of the Pinochet dictatorship. With this response to the mass protests, Chileans anticipate significant transformations in the system at all levels. The election could lay the foundation for these changes.