Activists say the former child soldier should have been granted amnesty under a cultural arrangement known as “Mato Oput”. 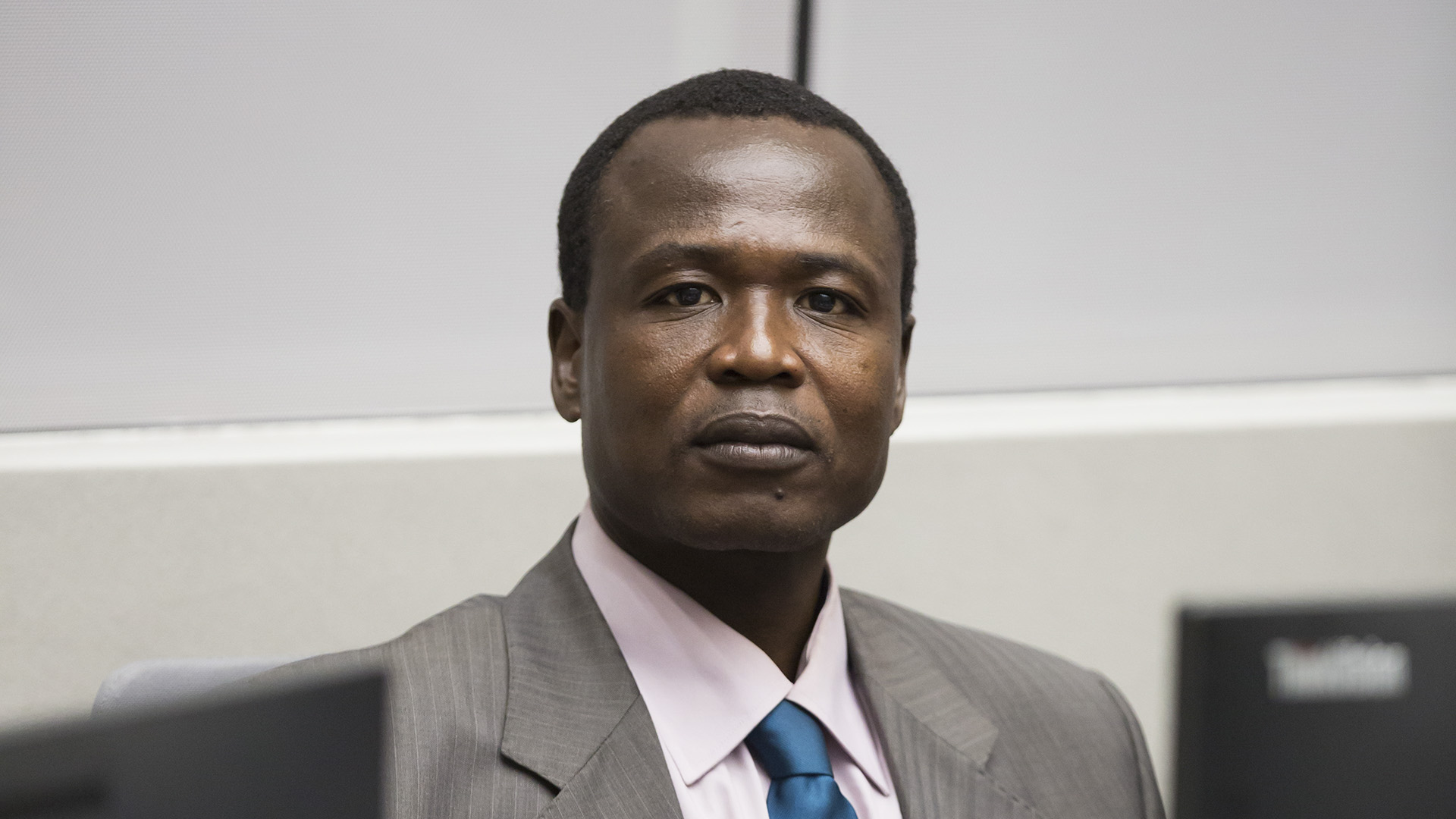 Dominic Ongwen at the opening of his trial in the ICC Courtroom I on 6 December 2016. (ICC-CPI)

KAMPALA, Uganda — Residents of northern Uganda have termed “unfair,” a 25-year jail term handed down to the former Lord’s Resistance Army commander Dominic Ongwen by the International Criminal Court on May 6.

In February this year, the International Criminal Court, based at The Hague, Netherlands, found the former child soldier guilty of 61 out of 70 counts, including murders, rape, child abduction, assaults, and sexual enslavement.

However, some residents of northern Uganda, which bore the brunt of the activities of the Lord’s Resistance Army, feel that Ongwen’s 25-year jail term is excessive and will not add to the victims’ healing.

Yet others felt that the jail term is too lenient and that the man known as “White Ant” within the Lord’s Resistance Army circles deserved nothing but the death sentence. 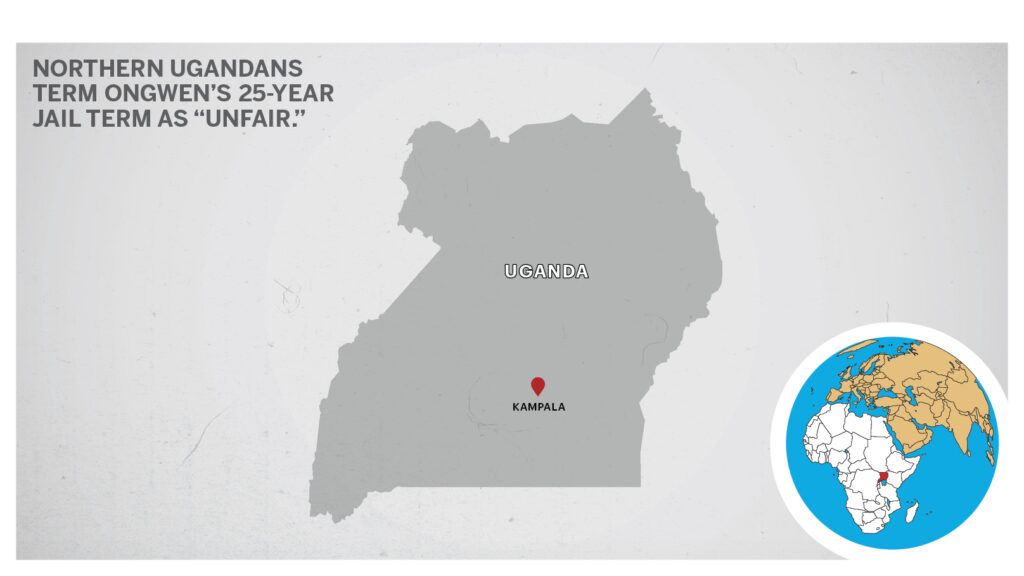 David Matsanga, the former Lord’s Resistance Army chief negotiator during the Juba peace talks between 2006 and 2008 in Juba, South Sudan, told Zenger News that the sentence lacked fairness since the International Criminal Court did not adequately investigate the case from the start.

“There is no fairness in the sentence,” said Matsanga. “I wonder why the International Criminal Court indicted only one party, and yet there were two parties involved in the war in northern Uganda. Where is the government? Why are the people involved not indicted?”

Formed in 1987, the Lord’s Resistance Army is a rebel movement based in northern Uganda aimed at ousting the government of President Yoweri Museveni and governing Uganda through the Biblical Ten Commandments.

The three-decades-long conflict has claimed more than 100,000 lives and seen the abduction of more than 60,000 children. During that period, the war has spread to neighboring countries, such as Chad, South Sudan, and the Central African Republic.

In October 2005, the International Criminal Court issued warrants of arrest for Ongwen and four other senior leaders of the Lord’s Resistance Army for crimes against humanity and war crimes committed in Uganda since July 2002.

Ongwen was captured in 2014 by the Seleka rebels in the Central African Republic, who later transferred him to the Ugandan forces who handed him over to the International Criminal Court.

His journey to the International Criminal Court began in 1988 at the age of nine, when he was abducted by the Lord’s Resistance Army rebels led by Kony as he walked to Abili Primary School in Koro, according to his statement to The Hague-based court.

Since then, Ongwen, as a child soldier, worked for Kony and rose through the ranks of the rebel group and became Brigade Commander of the Sinia Brigade. Before his capture in 2014, Matsanga said Ongwen was planning to surrender.

During his trial, which began in December 2016, his lawyers argued that Ongwen was kidnapped as a schoolboy and forcibly conscripted into the rebel group and therefore deserved a lighter sentence than the International Criminal Court’s maximum 30 years.

And while handing down the sentence, the judges at The Hague court said they had to consider that Ongwen, too, had lost relatives, his education disrupted, and his hopes for a bright future dashed the day he was kidnaped.

Presiding Judge Bertram Schmitt described him as “a perpetrator who willfully brought immense suffering upon his victims, but also a perpetrator who had previously suffered severe suffering at the hands of the community of which he later became a prominent member and leader.”

Jimmy Odoch, a coordinator at Heartsounds Uganda, a nongovernmental organization that provides psychosocial support to victims of the rebel group, said most people from Acholi land believe Ongwen should be allowed to reconcile with the locals through the traditional system known as “Mato Oput.”

“The sentence was not fair to both the victims and Ongwen,” he told Zenger News. “The International Criminal Court is alien to our people. It is a Western system that focuses on punitive methods instead of restorative and reconciliation approaches. If the Acholi community forgave General Alfred Banya and Brigadier Sam Kolo, it means the community is ready to reconcile and forgive Ongwen.”

Banya was the rebel group’s former secretary for political and human rights affairs, while Kolo was their former spokesperson.

Odoch and his family, like most of the Acholi community in northern Uganda, are victims of the war.

“The only benefit to the Acholi community and the victims from the sentence of Ongwen to 25 years is reparations to victims by the International Criminal Court,” he told Zenger News.

Geoffrey Omony, another victim of the rebel group’s activities and the program director of Youth Leaders for Restoration and Development, which supports former Lord’s Resistance Army soldiers, said Mato Oput—meaning “reconciliation” in Acholi—was more desirable to the survivors.

“Ongwen is also a victim like all of us,” he told Zenger News. “The best thing was to bring him back home to undergo the rituals of Mato Oput,” he said.

The Acholi Religious Leaders’ Peace Initiative, an interfaith organization dedicated to finding a peaceful solution to the rebel conflict, also opposed Ongwen’s trial abroad, saying they saw him as a survivor of the war.

However, to some victims of the Lord’s Resistance Army, Ongwen’s sentence is “unfair” in the sense that it is not as stiff as they would have wished.

“Considering how they murdered, raped young girls, burned people in their homes, mutilated people’s lips, and coerced them into sex slavery, among many other crimes, Ongwen deserves harsher punishment than 25 years in prison,” Stella Lanama Angel told Zenger News.

She is the director of the War Victims and Children Networking organization in northern Uganda.

“Our family was displaced, and the Lord’s Resistance Army killed two of my brothers,” he told Zenger News. “It’s nothing to spend 25 years in prison. The same sentence is often given to murderers who kill only one person. But Ongwen and his group killed thousands of innocent people, and they do not deserve to live.”

Retired Bishop Johnson Gakumba of the Anglican Church of Uganda, Northern Uganda Diocese, said: “I thought Ongwen would be given a very tough sentence, but still 25 years punishment is good enough.”

Akena Edwards, 59, from Parak in northern Uganda, who currently resides in Kampala, said his family lost all the businesses in the Awash sub-county because of Lord Resistance Army and expected Ongwen to be hanged to death.

“I wish Ongwen could have to be brought back here, and the Ugandan government just hangs him in public in northern Uganda where he committed the crimes,” he told Zenger News. “This could have given justice to the victims.”

Three of the five warlords wanted by the International Criminal Court—Otti, Odhiambo, and Lukwyiya—have all died. Only Kony remains elusive.

Asked about Kony’s fate, Matsanga, a former member of the rebel group who was granted amnesty, said: “I don’t know what lies ahead. I was granted amnesty, as have so many others who have responded to this call. But I don’t speak for  Kony.”
(Edited by Kipchumba Some and Sarika Kumar)

«Previous Post
The Tragic End Of An Endangered Whale Shark In Cameroon»Next Post
Inside Kenya’s Cryptocurrency Trade: Tales Of Pain And Promise