Mexicans Could Vindicate Or Rebuke AMLO In The June 6 Election

The Organization of American States will send election observers. 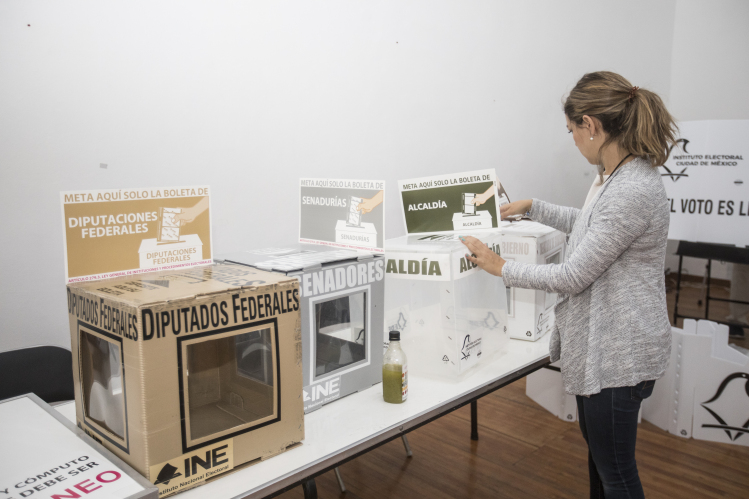 The 2018 Mexican election brought important changes to the country, including the election of Andrés Manuel López Obrador. (Alfredo Martinez/Getty Images)

Mexicans are getting ready to participate in the 2021 midterm election on Sunday, June 6. They will elect 500 federal deputies, governors, local deputies and municipal presidents.

These elections could give Mexicans the opportunity to vindicate or rebuke President Andrés Manuel López Obrador (AMLO), of the National Regeneration Movement party (Morena).

“Yes, the elections are just around the corner. Although with the pandemic, there may not be a lot of voters,” said 25-year-old Erick Pérez. “Right now, candidates of all parties are making a lot of show.”

According to the National Electoral Institute, more than 93 million Mexicans are eligible to vote. Experts believe that at least 45 percent of them will exercise their right.

The percentage could be higher because society is divided. A large proportion of Mexicans are not satisfied with the work of the ruling party, while AMLO has earned the broad sympathy of other voters.

“This is an important election because Morena has done some things that are fine. It has given scholarships and pensions for the elderly, for instance. However, other issues have left room for criticism,” said Pérez, who is surprised about the race’s unusual alliances.

“There is a lot at stake in the election,” said Javier Ordóñez, a political science and public administration graduate. “You can see that Morena is concerned. … We are almost one month away from the election, and everything can change from one moment to another.”

A part of society disagrees with how the ruling party has handled the pandemic, which could be reflected in the election results, Ordóñez said, explaining that private doctors have been put aside in the vaccination process while teachers are already vaccinated. Part of the population might read this political decision as a move by AMLO to win the teachers’ vote, according to Ordóñez.

“Other factors, such as the subway accident, may hit the government directly,” he said.

The final result may not be known the night of the election after the polls close, as some processes might end in court.

“We will see the ruling party fighting in the Federal Electoral Tribunal — the judiciary’s agency that resolves election controversies — to win seats, and we will also see the opposition alliance resorting to it with their disagreements. Besides, it will be important to see the population’s behavior, if they will truly go out to vote or not. That will also make a difference,” said Ordóñez.

The Organization of American States will send an Electoral Observation Mission, whose members will begin to arrive in Mexico the last week of May.

«Previous Post
Tepache: From The Mayans To The World»Next Post
Mexico Sees Gas Prices Skyrocket Because Of Taxes, Not Pipeline Crisis