Rapper survived a shooting and being paralyzed, stays motivated to make positive music, inspire others. 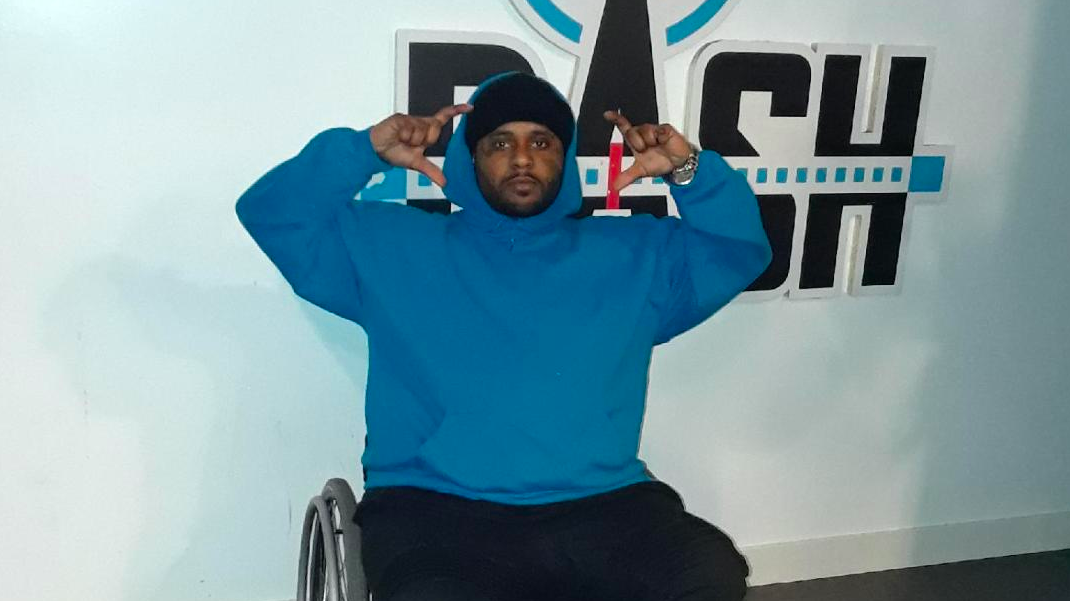 Despite being shot and paralyzed 15 years ago, rapper August Bleu refuses to let that harrowing event define him. (Courtesy of August Bleu)

August Bleu’s new single, “Big Tymer” is a high-energy party song designed to crowd the dance floor. To know how far Bleu came to create that tune, you need to know his story.

In 2006, Bleu was shot seven times and left paralyzed. The traumatic incident hurt his self-confidence and sense of direction.

Eventually, the Los Angeles native poured his soul into his music and use his situation as a motivator. Naming his first mix tape “Seven Shots Up,” vowing not to let adversity win, AB serves as an inspiration for anyone dealing with any handicap, mental or physical. He has emerged as one of the hottest rappers on the West Coast.

Zenger News got Bleu to open up about his trials and tribulations, as well as his triumphs.

Zenger: Love the new “Big Tymer” single. How did that track come together?

August Bleu: It was just a matter of hitting up my producer. I’ve got songs produced by others, but I mainly work with one producer on some Snoop– and Dre-type vibes. I told him: “It’s time to make the people dance.” I don’t have too many songs that make people do that. This is one of those songs where I felt like I could finally put something out where the women can shake something to, and something the fellas could enjoy as well.

Zenger: Is that diversity important to you?

August Bleu: It’s definitely important and needed, depending on the type of success one wants. Some artists are content with a little street fame that they have, being known around their area. Or even just being known on one coast. I wanted to make the type of music played across the world. I wanted to create something that wasn’t just for the “urban” community. I make music for everybody.

Zenger: It’s like 50 Cent, he can give you street records, but he also provides “In The Club.”

August Bleu: Yeah! 50 Cent is somebody I look up to as far as being a businessman. I wanted to let people know; I can always make the street records, but I can also go commercial.

Zenger: Where do you see West Coast rap right now?

August Bleu: To me, rap never went anywhere. It has always been poppin,’ in my opinion. East Coast rap was never going to go anywhere. Then, when Outkast came out at an award show and said, “The South got something to say,” that area has been poppin’. I don’t think anybody ever fell off. I don’t feel like one coast is better than the next, or down South is better than the Midwest. I don’t look at it like that, but I always felt the West Coast is special.

Zenger: Glasses Malone told me you were a special talent. What’s that relationship like?

August Bleu: I used to be heavy on my Twitter account, and I came across a tweet that he tagged me in. He tagged my big bro: “This dude is nice, but August Bleu is super dope.” That let me know Glasses got down with me. But I reached out to Glasses during MySpace days one time. It wasn’t reaching out to him to try and work with him. I had done a remix to one of his songs, like a cover, and I used one of his beats. I hit him up to let him hear it and get his opinion on it. I asked him if it was cool if I could release it. He gave me his honest opinion. He said the quality of the sound wasn’t up to par, it needed some work.

Fast-forward to the time and I came across that tweet by my boy, Hip Hop Alkatraz. He’s a Mexican cat who now goes by Tony Nario. He was throwing battle rap events at Glasses Malone studio. I started going to those events, my boy, Dre Vishiss invited me to a battle rap event one time, and that’s when I finally met G. Malone. We chopped it up, he gave me his number and that’s how that song we did together came about.

Zenger: You’ve been through a lot. You were shot seven times, you are confined to a wheelchair, yet you still do your thing. You don’t let that stop you. Did all that motivate you more, once you were able to get back into the studio?

August Bleu: Most definitely! We don’t really stop to think about certain things until we end up in those positions.  I never really stopped to think about other people who were dealing with the things that I deal with on a daily basis, being paralyzed or having an illness or any type of setback. I know how I felt when I first got put in a chair. I lost all hope.

I took it on the chin, but it came with me losing hope, losing faith, losing self-esteem and things of that nature. But then, I became motivated. I wanted to let people dealing with the same hardships know you can still do what you want to do. Life isn’t over. You just gotta make the best out of whatever life throws at you.

Everybody is just on a constant go. Nobody is really taking the time to better themselves, the way they need to better themselves. It’s like when COVID hit, we were somewhat forced to be in the house. I felt like all that did was create more entrepreneurs. Because it gave people a chance to sit down and map things out. It made people question their next moves.

Zenger: You’ve already received co-signs on your Instagram from, Glasses Malone, Lonzo Ball, Big Boy, Tyson Beckford and Khalil Kain. How it feel to have the support of those prominent names?

August Bleu: It’s a dope feeling. Besides Lonzo Ball, these are people that I grew up either watching or listening to. Big Boy is a living legend. They always say you don’t become legendary until you pass away, but this is somebody that is a living legend. To get that shout-out from him and connect with him, it was surreal, man. I’m a humble person.

Zenger: You are an inspiration to so many people. Who or what inspires you?

August Bleu: One of my biggest inspirations is 2Pac. In the sense of control he has over the masses. He didn’t abuse that control. But you have a lot of artists now that do abuse their platform. And a lot of the people they have control over are kids. I don’t want my music to motivate some kid to kill somebody else who looks just like him.

I want my music to motivate the youth, because those are the largest percentage of viewers and listeners. When they watch an August Bleu video or listen to one of my songs, I always want there to be a lesson in the song. I may put out a party record just for fun, but the majority of my music is to get them to understand, I’m still pushing, I haven’t given up.  I want them to always know they can do whatever it is they want to do. They can be whoever it is they want to be, but at the end of the day, be yourself. Don’t ever let somebody make you feel uncomfortable for being you.

Zenger: What are you working on?

August Bleu: I’m actually working on two projects at the same time; I will be dropping one in September. My goal is to pump out as much music as possible. Not even just the music but to get involved with the people. I always try to find a way to do something to give back. Some people may feel like I don’t give back. The only reason they would feel that way is because, I’m not for pulling out my phone and trying to record myself giving a homeless man some money, or clean clothes.

To me, that’s degrading. Putting a camera in their face while you’re helping them, they’re already at their lowest point. I understand wanting to inspire others to get out there and give back to the less fortunate, but the larger percentage of people who do that are not genuine. I don’t like recording when I give back unless I’m doing a toy drive or some kind of event.

Everything is not for the camera. People act like it didn’t happen because they didn’t see it on social media.