The Oval Office meeting will focus on the Democrats' $4 trillion spending proposals.
By Carlin Becker May 11, 2021
Facebook
Twitter
Linkedin
Email 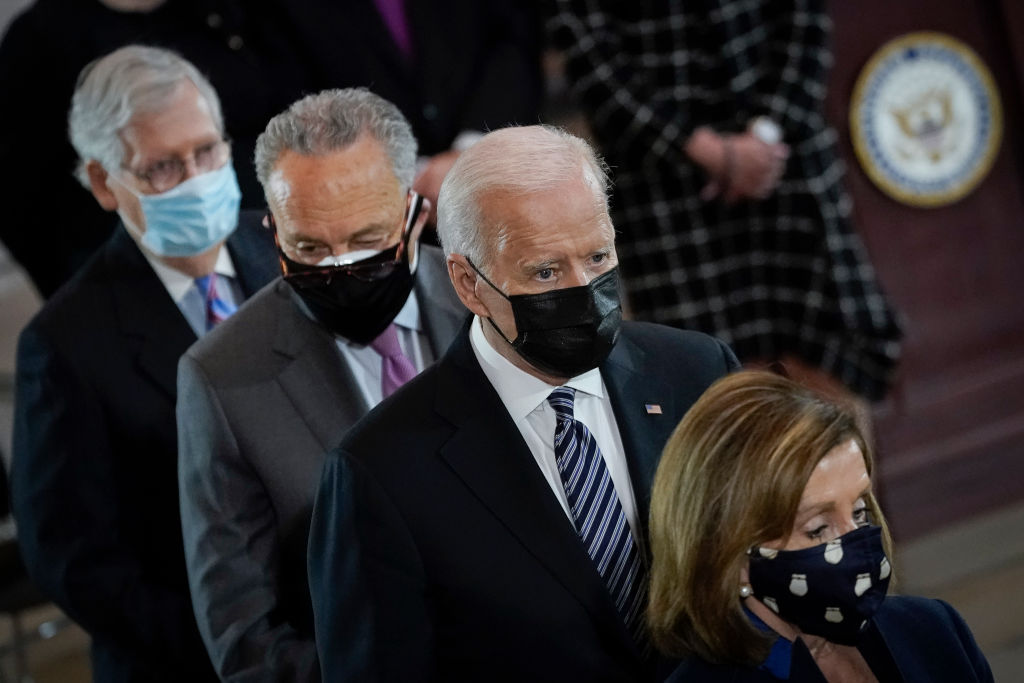 When President Joseph R. Biden Jr. meets with all four leaders of Congress — including the Republican minority leaders of the House and Senate — to discuss $4 trillion in infrastructure spending plans on Wednesday, it will be the first meeting of its type for him.

Not since House Leader Nancy P. Pelosi (D-Calif.) was pictured in Oct. 2019 waving her finger across the Cabinet Room table at a seated President Donald J. Trump has a chief executive met with all four congressional leaders at the White House. But few expect a display of unity between the Democratic president and Republican leaders.

“There’s a massive gulf between what Republicans support and what Democrats have proposed. The two sides don’t even agree on the definition of ‘infrastructure,’” Rachel Greszler, a research fellow at the Heritage Foundation, told Zenger News. “It’s unlikely that the two sides will come to any agreement.”

Biden is expected to use the meeting to discuss his $4 trillion spending proposals. Pelosi and Senate Majority Leader Chuck Schumer (D-N.Y.) have both been receptive to his ideas. However, their Republican counterparts, House Minority Leader Kevin McCarthy (R-Calif.) and Senate Minority Leader Mitch McConnell (R-Ky.), won’t be as easy to win over.

Biden, who was a senator for 36 years before serving as vice president to former President Barack H. Obama, has a good working relationship with his party’s establishment figures in Congress.

But he does not yet have much of a relationship with McCarthy and — despite having known McConnell for decades — he has yet to formally meet the Senate minority leader as president.

The sit-down will focus on Biden’s $2.25 trillion American Jobs Plan and his $1.8 trillion American Families Plan, both of which the president says are necessary for the United States to remain a competitive world leader for centuries to come. The Republicans, though, remain far apart from the president on both a price tag and the details of the proposals.

“The proper price tag for what most of us think of as infrastructure is about $600-800 billion,” McConnell told his state’s PBS station over the weekend.

McConnell has already signaled in the lead-up to the meeting that Republicans would not be willing to spend more than $800 billion on physical infrastructure and knocked Biden’s American Jobs Plan for including what he called unrelated items.

In addition to creating millions of jobs to rebuild the country’s roads, bridges, and rail and water systems, Biden’s plan also calls for an increase in “human infrastructure” spending, such as expanded access to healthcare and caregivers for the elderly. It also includes investments in housing and electric vehicles.

Republican leaders have said such items are not “core” infrastructure needs.

Meanwhile, the president’s American Families Plan, which he pitched in his first joint address to Congress last month, aims to expand access to childcare, provide families with up to 12 weeks of paid family and medical leave, and offer four more years of free education, including two years of universal pre-K and two years of community college. After his speech, Republicans were quick to criticize the proposal as unrealistic, costly and a return to “big government.”

The two parties also disagree on how to pay for the plans.

Biden and the Democrats have proposed raising the corporate tax rate from the 21 percent threshold it was cut to by Trump and the GOP in 2017. But Republicans say they are prepared to oppose changes to their law, and have instead proposed diverting state and local coronavirus relief funds to offset infrastructure costs or using gasoline taxes.

“For high-earning individuals, the top federal tax rate on income and capital gains would hit almost 45 percent; combined with state and local taxes, these Americans would face confiscatory tax rates of almost 60 percent — levels sure to encourage them to seek less-productive, tax-sheltered investments or even move abroad to lower-tax jurisdictions.”

Despite their differences, a group of ten Senate Republicans led by Sen. Shelley Moore Capito (R-W.Va.) have said the divide between Biden and the GOP on infrastructure is “not nearly as big as what you might think.”

Some members of the group are set to meet with Biden at the White House on Thursday to discuss their proposed package of under $600B in spending, which they said was not their “final offer.”

Should the two sides be unable to reach an agreement, the Democratic leaders Pelosi and Schumer have indicated that they could try to move ahead with legislation on their own. The most likely path for passing Biden’s proposals would then be through the reconciliation process, which would let Democrats bypass the Senate’s 60-vote filibuster if no Republicans voice support.

Another option would be separating portions of the infrastructure package that can garner more than 60 votes into their own bill and passing the remaining items through reconciliation.

“If the Republicans are prepared to compromise and work with some serious proposals in these areas, which will be offset by tax increases on corporations and the wealthy, then President Biden should work with them,” Dean Baker, senior economist and co-founder of the progressive Center for Economic and Policy Research, told Zenger News. “But if their goal is simply obstruction, as it was under President Obama, then there is no reason for Biden to waste time playing games.”

The high-profile meeting with Biden and the potential for negotiations come as the GOP wrestles with possible leadership changes that could shift the trajectory of the party’s future.

House Republicans could vote as early as Wednesday to remove Rep. Liz Cheney (R-Wy.) from her position as House Republican Conference Chair, the third-ranking leadership position. Other Republicans say she is unable to unite the party for the 2022 midterm elections due to her continued criticism of Trump’s 2020 election fraud claims.