Lee Malvo, who was 17 at the time of the killings, is interviewed in a new documentary series.
By Hamil R. Harris May 11, 2021
Facebook
Twitter
Linkedin
Email 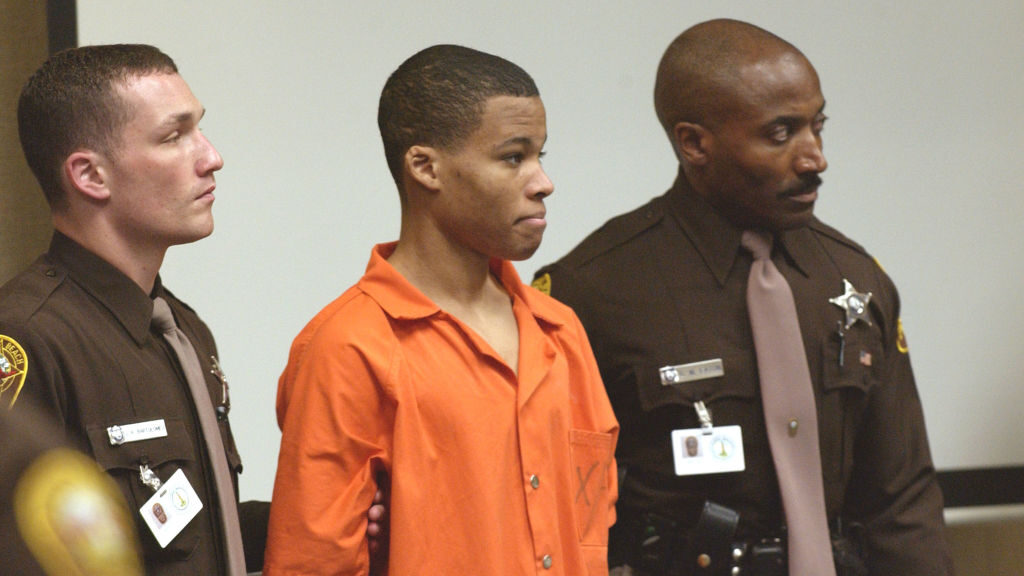 Sniper suspect Lee Boyd Malvo (Center) is escorted by deputies as he is brought into court. (Photo by Davis Turner-Pool/Getty Images)

WASHINGTON — In October 2002, 17-year-old Lee Malvo and John Muhammad terrorized the Washington, D.C., region with a series of random shootings from inside the trunk of a 1990 blue Chevy Caprice, killing 10 people and critically wounding three.

A little over a year after 9/11, the shocking three-week shooting spree terrified the nation.

People were afraid to buy groceries or pump gas because parking lots and gas stations were all part of the asphalt killing fields. Specific shooting scenes included the parking lot of a Michael’s craft shop and just outside a middle school in Bowie, Maryland, where a 14-year-old boy was shot and wounded.

An eight-part documentary series titled “I, Sniper” that began airing on Vice TV on May 10, attempts to answer that question.

Malvo tells his story about the deadly rampage that began nine months earlier in Tacoma, Washington, when he fatally shot a young African American woman.

“Keenya Cook was a young mother &mldr; with a young baby,” said Ursula Macfarlane, series director of “I, Sniper.” “She was part of Malvo’s initiation by John Muhammad and her story has never really been told.”

With the documentary series, a new generation will learn about Malvo, who faces a jury in the court of public opinion as he narrates the tragedy that he participated in as a teenager.

“’I, Sniper’ seeks to understand, not vindicate, and show how and why someone can become a mass murderer, even at the age of 17,” Morgan Hertzan, executive vice president and general manager at VICE Television, said in a statement. “The D.C. sniper case was one of the most terrifying crimes in recent history. ‘I, Sniper’ goes beyond the story we thought we all knew and investigates what led Lee Malvo down his horrific path.”

The project was four years in the making, said Oscar-nominated executive producer John Smithson. “In addition to securing unprecedented access to Lee Malvo, we also undertook extensive interviews with the investigators of the Washington, D.C., sniper case, the survivors and the victims’ families, so that we could view the story from all perspectives, and examine both Malvo’s childhood of deprivation in Jamaica and the murders in forensic detail.”

Muhammad was executed in Virginia in 2009; Malvo was convicted in 2006 of six murders he had committed in Maryland and sentenced to six consecutive life sentences without possibility of parole.

A Virginia law enacted last year ending life without parole for juveniles made Malvo’s Supreme Court appeal for dismissal moot. Malvo will be eligible for consideration for parole in two years in Virginia; his life sentences in Maryland are not affected.

Malvo married in March 2020 in a ceremony at Red Onion State Prison, a supermax facility in Pound, Virginia. The woman he married initiated contact by writing him letters, according to published reports.

It is haunting to hear Malvo describe his actions in a series of 15-minute phone calls with series producer Mary-Jane Mitchell.

“You need to become what I need you to be,” Malvo recalls what John Muhammad told him, in the first segment of the documentary.

“He took me to the handgun range. He stood behind me and say listen to the sound of my voice and follow,” Malvo told Mitchell in one of his interviews.

“When I tell people I have spent years making a film about the shootings committed by Lee Malvo, people always ask ‘Why?’” Mitchell said. “And my answer is, when a 17-year-old commits multiple murders isn’t there inherent value in trying to understand why?

“This film is not about glorifying, excusing or justifying Lee Malvo’s actions. It’s about understanding his actions within the context of his life.

“Lee Malvo asked himself the question ‘What inside me made that possible?’ and for the next two years, one fifteen-minute phone call at a time, he wrestled with finding an answer. My job was to listen. To push him beyond the story of what he did and ask him to examine why he did it,” Mitchell said in an interview.

“I wasn’t trying to elicit an intellectual response, but an emotional response. This was the longest and most difficult conversation I have ever had with anyone. ‘I,Sniper’ wraps this conversation into a documentary so that people can consume it, converse on it, and I hope, find understanding in it.”

“This incident affected dozens of lives across the United States, and for me it raised a number of questions about the availability of guns,” said Ursual McFarlane, series director. “The most important job on my shoulders was to honor the victims and their families and to never sensationalize their stories.”

In the D.C, area, the first shot in the Malvo/Muhammad spree was fired on Oct. 2, 2002, through a window of a Michaels craft store in Aspen Hill, Maryland. The bullet narrowly missed cashier Ann Chapman. But 90 minutes later, James Martin, a program analyst at the National Oceanographic and Atmospheric Administration, was fatally shot in the parking lot of a Shoppers Food Warehouse in Wheaton, Maryland.

On Oct. 3, four people were shot dead within two hours in Montgomery County, Maryland. That night, a cab driver was killed in the Takoma neighborhood of the District of Columbia. A dark blue Caprice Classic that was transformed into an urban tank with a carved hole for .223-caliber Bushmaster rifle operated by Malvo.

Other documentaries have been made about Muhammad and Malvo, but this project goes even further by including the terror they caused before ever reaching Washington, D.C.

In the end it was the story of a Jamaican teen who, with his mother, met Muhammad in Antigua and Barbuda. Muhammad converted Malvo to Islam and kept him isolated from his mother, according to media accounts. Malvo went on to be groomed, military-style, by Malvo, who trained Malvo to be a heartless killer.

In the documentary, Malvo seems to have evolved into someone who understands the magnitude of what he had done.

“I stole time, I stole life. … Even now it doesn’t make sense,” he says in the first episode.

He craved love to the point that he would turn Washington, D.C., into a horrible arcade. He created a shooting gallery from the trunk of a car to soak the region with blood. But perhaps in a moment of compassion, he dropped the scope that he had on the 14-year-old on his way to school in Bowie, Maryland, and the young man, though wounded, lived.