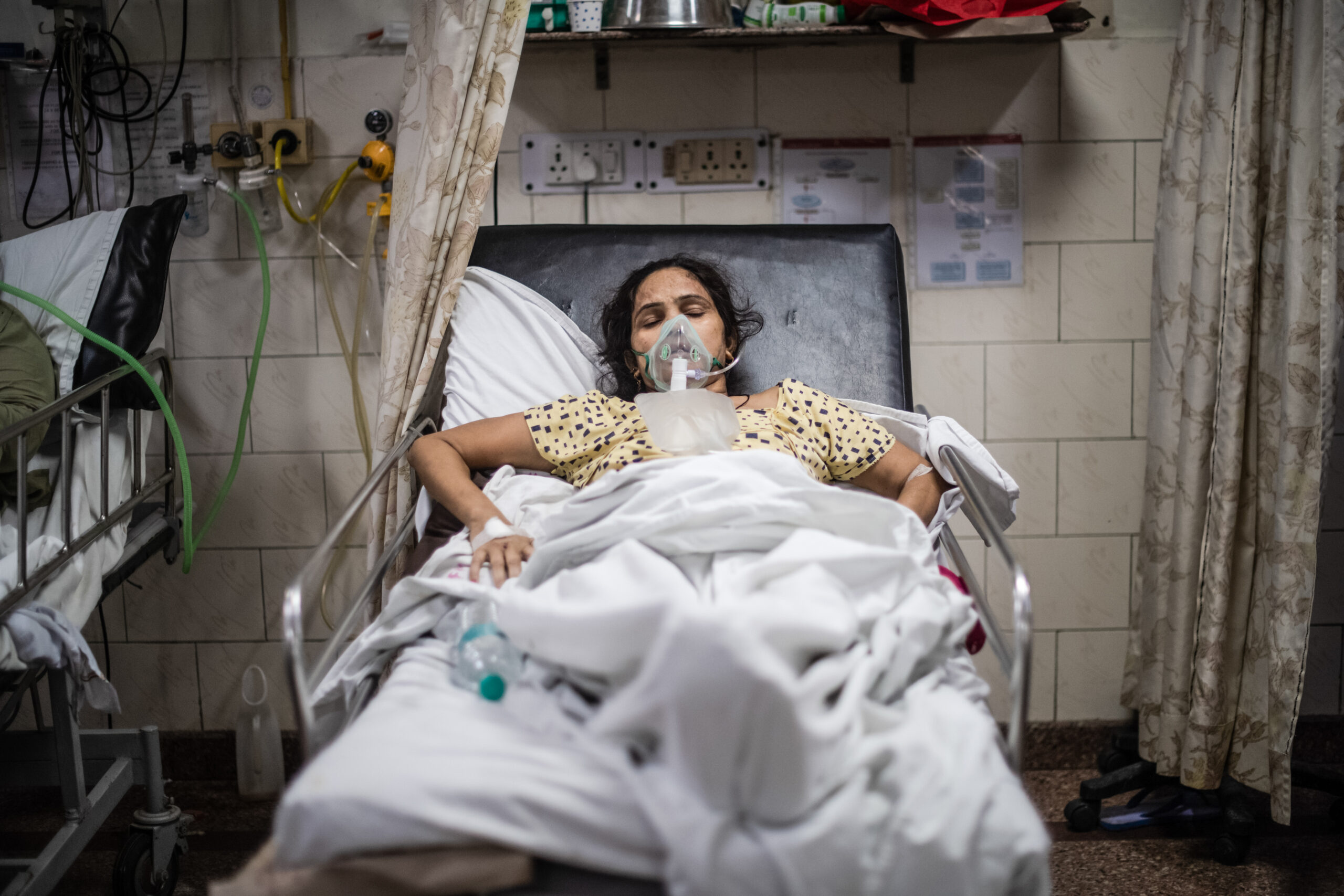 A Covid-19 patient in the emergency ward of a hospital in New Delhi, India. (Rebecca Conway/Getty Images)

NEW DELHI — Dharmendra Kumar, a 37-year-old doctor, saw four patients slip away on April 26 as the medical oxygen supply ran out. He is the operational head of Covid care at Virat Hospital in Rewari, a city in India’s central state of Haryana.

“We tried everything we could to arrange oxygen cylinders,” said Dharmendra.

“I called the nodal officer, gas agencies, district magistrate, inquired at the government hospital, called everyone that I could, fought till the end, but no one helped out.”

Dharmendra remembers it was around half past two when the supply ran out.

“I saw patients in the intensive care unit dying in front of my eyes.”

Soon, the frantic search for oxygen — by the relatives included — ended, and sounds of crying and wailing filled the intensive care unit.

Some family members charged the hospital for the deaths, while others couldn’t understand who was to blame — the disease, the hospital, the government, or their fate.

“Some relatives blocked the road outside the hospital and raised slogans against the administration and hospital,” said Dinesh Fandon, a resident of Rewari. “The police was called to control the situation.”

The district administration had set up an inquiry to determine the reason for the deaths in the Virat Hospital but hasn’t come out with any findings yet.

“Every day, we have to fight for oxygen. There is not a single day when the oxygen supplied to us is equal to our requirement,” Dharmendra said. “There have been situations where we were even begging for one or two cylinders.”

Though witnessing unabated deaths is traumatic, Dharmendra shows up to work every day.

Scenes inside intensive care units have changed drastically in the country over the past month. The units, in which relatives used to be allowed for limited minutes after following extensive checks such as sanitization, gloves, shoe coverings, face masks, and skull caps, are frequented by family.

At some hospitals, temporary beds have filled any spaces left for movement. At some others, beds are lying vacant due to scarcity of oxygen or staff.

“We have a 100-bed facility. Due to lack of oxygen, we aren’t able to function at full capacity and are treating 71 patients,” Dharmendra said.

Like medical staff across the nation, Dharmendra is fighting the pandemic without breaks for the past year. Yet, Dharmendra says the past month has been overwhelming.

“For the past one month, we have been working continuously for 24 hours,” Dharmendra said. “There is no day and night for us, no time at which I start my shift or end it.”

Health care workers are stressed because of severe work pressure due to a shortage of staff. The lack of oxygen and life-saving drugs have added to their worries, impacting their mental health.

Health care workers are struggling day and night to protect people and rarely talking about it.

Vivek Rai, a 35-year-old resident doctor working in Max Hospital Saket in India’s capital New Delhi, killed himself on April 30. He got married last year, and his wife is two months into her pregnancy.

“The death of a young doctor is nothing short of murder by the system which was created due to shortages of basic healthcare facilities,” Wankhedkar wrote on Twitter.

Wankhedkar said Rai was on Covid duty for one month and was dealing with intensive care patients every day in which not many were surviving.

“He was a brilliant doctor and helped save hundreds of lives in this Covid era,” Wankhedkar tweeted.

“It will be difficult to put it in percentage terms,” Priyamvada told Zenger News. “But the number of calls we are receiving from doctors facing a personal breakdown is increasing day-by-day.”

She believes there is a stigma among doctors about mental health. “They don’t usually seek help. Even if they do, it won’t be in the hospital they are working in as they think it will affect their professional advancement or relationships.”

“Many times doctors start self-medication, which is highly inadvisable. Self-medication generally leads to addiction,” she said.

Priyamvada says doctors are provided training on dealing with similar situations, but no one was ready for this unprecedented scale of death and disaster.

“There is also a fear among doctors that they might be infecting their families. All these issues add up to their mental health crisis,” she said.

Since the coronavirus pandemic began, 734 modern medicine doctors lost their lives till February, according to the Indian Medical Association. But the government said 162 doctors had died while treating Covid-19 cases till January. Now, the association says deaths have climbed to 864.

The Central Residency Scheme, implemented in 1992, states that a doctor should work for 48 hours a week. But in India, they are working twice or thrice of that.

“My phone keeps on ringing 24 hours — it has become a call center,” Dharmendra said.

“I am taking care of patients, making sure there is adequate oxygen supply, giving details to the nodal officer and, in between all of that, I also have to attend to so many phone calls. Availability of bed, medicines, everyone keeps on enquiring.”

“And, after the April 26 incident, things have changed. I work all the time. Sometimes I take the pain and go to oxygen plants to get oxygen. There are worries in my mind — what if the car gets a flat tire, what if the driver sleeps. We need to keep motivating staff, and I do that every day.”