Bird watchers can marvel at 1,300 birds from 130 species at the huge, 40-acre site.
By Luciano Nagel May 7, 2021
Facebook
Twitter
Linkedin
Email 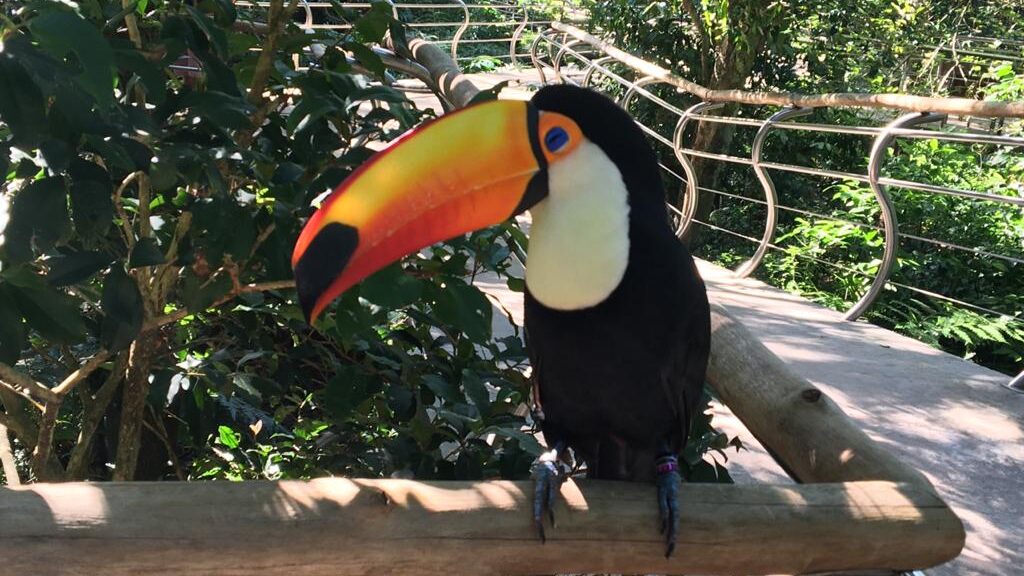 Although large, the toucan's bill is light, accounting for only 5 percent of its body weight. (Luciano Nagel/Zenger)

FOZ DO IGUAÇU, Brazil — Tropical air, an abundance of plants, and people who care about nature gather in southern Brazil.

The only place in the world devoted to preserving the birds of the Atlantic Forest (the Mata Atlântica) is located in the city of Foz do Iguaçu, on the western border of the state of Paraná. A tropical forest biome provides the setting for this park.

Known as the Bird Park, it spans about 40 acres [16 hectares] and is one of the largest bird parks in Latin America. It has more than 1,300 birds of 130 species, many of which are endangered or were rescued from animal trafficking networks. Macaws, parrots, toucans and yellow canaries share the park with turtles, alligators and snakes.

Harrison Andrade, a publicist and tourist from Rio Grande do Sul, said he was impressed by the park’s beauty and the care that the Croukamp family, its owners, and their employees provide.

“Much more than watching the birds, it [the park] provides a sensory experience. You hear the songs, the sounds of the birds, the whole environment. It is fantastic,” he said.

Andrade highlighted the beauty of the Birds of Rivers and Mangroves nursery, where visitors can see birds that live near rivers or coasts, such as scarlet ibis, blue-headed parrots, herons, ducks, toco toucans and many other species.

“The proximity of birds to humans caught my attention. I had never seen a toucan so close, right in front of me. I knew many of the birds only from photographs, such as the great harpy eagle. This bird was in another aviary,” said the publicist, who in his leisure hours works as a photographer.

The great harpy eagle is the largest bird of prey in Brazil. It builds its nests in trees over 98 feet high. A couple of them live in Bird Park: Hans and Esperanza.

“Entering a nursery is an enriching learning experience. So much so that when I returned to the hotel in Foz, I researched more on the harpy eagle, a charming and beautiful bird,” Andrade said.

The German veterinarian Anna-Sophie Helene and the South African silver mine entrepreneur Dennis Croukamp held the park’s ribbon cutting on October 7, 1994. The animal lovers met in Namibia, in southwestern Africa, in the 1970s, where they worked together and had two daughters.

Helene, 74, is retired and locked down due to the pandemic. Her youngest daughter, Carmel Croukamp Davies, 41, took the helm in 2014, and is now the director of the park. Croukamp Davies said the idea of creating a bird park started in Namibia when her parents received a baby African gray parrot, Pumuckl, as a gift. Pumuckl soon became a member of the family.

“The parrot lived free. When it was lunchtime, my mother would play the flute, and she would come flying straight to my mother to get fed,” Carmel Croukamp Davies said.

The family soon went in search of a partner for Pumuckl. It didn’t work out with her first “boyfriend,” another African gray parrot. But the family acquired more parrots and other birds until their place in Namibia became a sizable African bird aviary.

In 1990, the family moved to the Isle of Man, between Ireland and England, in the United Kingdom.

One day a friend of Mr. Croukamp who had traveled through South America spoke with the couple about the beauty of the Iguazu Falls, considered one of the seven wonders of nature, in Foz do Iguaçu. He suggested they get to know the region and open a “tourist attraction.”

The friend wanted to build a park that would shelter crocodiles. “My dad told him, ‘I don’t like crocodiles, what I like are birds,’” said the youngest daughter.

The Croukamp family left the British island, bought the property in Foz do Iguaçu, and began constructing the Bird Park.

The first animals sheltered in the park came from donations and seizures by the Brazilian Institute of the Environment.

The Croukamps used their savings to build the park.

“My father put all of his retirement money in the park and, as I recall, he even sold his car. The original idea was to shelter birds from all over the world. In 2016, we realized that the Atlantic Forest had so many endangered birds, and today we are the only organization in the world that focuses on their conservation,” Croukamp Davies said.

Among the endangered birds are the black-fronted piping guans (Aburria jacutinga), a species that lives only in the Atlantic Forest, measures about 27 inches, and weighs a little over 2 pounds. Also known as jacutinga, this bird is usually black with white details on the tips of the wings and the head, a bluish beak, and a red crop with shades of blue.

According to the risk assessment carried out by BirdLife International, the bird is endangered and has already disappeared from many places where people had documented its presence.

Two years after the park opened, Dennis Croukamp died of cancer, at age 70, on the Isle of Man. Today, visitors to the Bird Park can see his memorial in what used to be his favorite place, the Birds of Rivers and Mangroves nursery.

A visit to the nurseries

Bird Park currently has 23 nurseries for visits and 5 for “immersion,” where the visitor can enter the habitat, be close to toucans, macaws, parrots and parakeets, and feed them fruits and particular portions of food.

A park employee explains the different types of birds, their characteristics, the diet of each species, the region of Brazil in which they live, and whether they are endangered. More than 50 percent of the birds that arrive at the park are rescued from traffickers, and many arrive injured.

There is also a place where tourists can closely observe butterflies, caterpillars and cocoons. John Leggat, a friend of Dennis Croukamp, brought this site to life.

“More than simply raising awareness and educating people about the problems of the Atlantic Forest’s flora and fauna, we need to involve the visitor to be part of the change,” said Lucianna Leite, the biologist and manager of the Bird Park Participation and Defense sector.

Leite said that when visitors interact with animals, they find ways to apply what they have learned to their everyday life and even their homes. The manager cited as an example the restaurant within the park that serves dishes with non-conventional food plants.

“These plants show us what our forest is like here, its biodiversity, which also sustains us and, consequently, brings us health. That is why we must preserve it,” Leite said.

The biologist, who has worked in the park for just over two months, said, “Here we learn the history of each animal, where it came from, if it was captured, and if it was a victim of abuse. We have some endangered species that today can reproduce here under our care, and we can then return the animals to nature. This fact is gratifying for me.”

A walk through the park can last from one to three hours, depending on the visitor.

Visiting hours are Tuesday through Sunday from 9 a.m. to 5 p.m. Tickets cost a little over $10 per person for Brazilian or foreign tourists. Children under 8, accompanied by their parents, do not pay a fee. During the pandemic, the use of face masks is mandatory throughout the park.