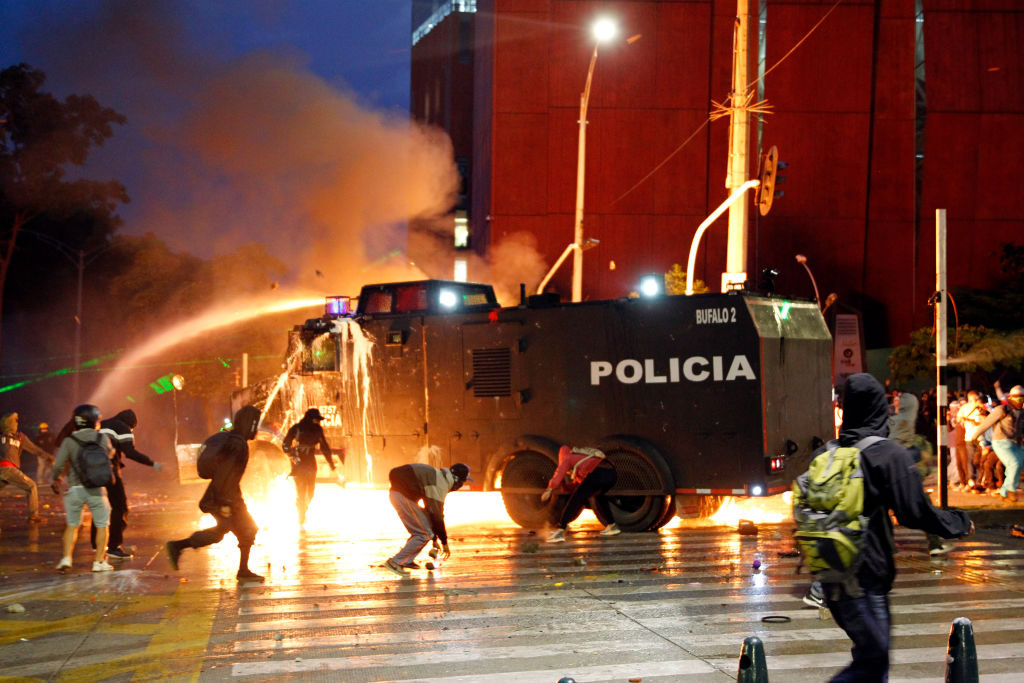 Protesters in Colombia throw objects at an anti-riot tank as it blasts them with water during the national strike on May 5, 2021. (Fredy Builes/Getty Images)

Colombian President Iván Duque’s approval ratings were already low when he proposed tax reform measures that led to demonstrations across the country. Two dozen people died in the violence that followed, and popular discontent and police repression are worsening on Colombia’s streets.

According to Colombia’s National Administrative Department of Statistics (DANE), the country’s economy fell 6.8 percent in 2020 due to the lockdown and closures related to the global pandemic.

In this context, Iván Duque’s government promoted changes that, if carried out, would have hit the middle class, according to protesters. Iván Duque is widely considered a protégé of former President Álvaro Uribe (2002–2010).

“In my opinion, the mechanism was wrong. It was a regressive reform typical of a conservative government, like that of Duque, and of a super-conservative Minister [of Finance] like [Alberto] Carrasquilla,” said Felipe Botero, a doctor in Political Science from the University of Arizona and a Master in Social Sciences from the University of Chicago. “It was a reform that charged the middle class for the cost of the pandemic and left the richest sectors of the population untouched.”

“Now that the presidential elections are approaching, one can assume that these mobilizations are the preamble to the campaign that will end in August next year with a new president,” said Vicente Torrijos, a Political Science professor.

“Duque followed an inappropriate procedure. First, the Minister and his advisers created a text [the reform measures], and they practically imposed it in an authoritarian manner and without any consensus,” Torrijos said.

Colombia’s political and social climate was troubled before the tax reforms.

“There was already a climate of unease and pronounced inequality,” said Juanita Vélez, a Colombian journalist and researcher. “The pandemic greatly increased poverty. The feeling of lag combined with a pandemic year and its economic and social effects.”

🇨🇴 #Colombia: We are deeply alarmed at developments in Cali overnight, where police opened fire on demonstrators, and a number of people were killed & injured.

⏩ States have a responsibility to protect #HumanRights and facilitate peaceful assembly.

This is not the first time that Duque has faced protests or the first time police have killed young people. “There had been two demonstrations, on Nov. 21, 2019, and Sept. 9, 2020, with issues of strong police abuse. In [Nov.] 21, Dilan Cruz died, and the death of Javier Ordóñez led to the demonstration of Sept. 9,” said Vélez. From her perspective, the tax reform measures were the straw that broke the camel’s back. And now the discontent is evident.

Duque insisted on carrying out the reform despite the almost unanimous rejection. As a result, a national strike was called for Apr. 28. In response, the government deployed the Public Force — the military and the federal police — to stop the protests and decreed curfews in several cities. That night, the first victims died in Bogotá and Cali.

“In the demonstrations on Nov. 21, there were incidents related to ESMAD [Mobile Anti-Riot Squad] and abuses by the Public Force. On Sept. 9, we had 13 deaths at the hands of the police, and now there are 24. What you see is an escalation in the use of force by the police, and it is a very worrying escalation,” said Vélez.

Duque withdrew the reform proposal on May 2. Alberto Carrasquilla resigned as Minister of Finance the following day. However, none of this stopped the protesters. On the contrary, the response of the Public Force exacerbated the demonstrations. May 6 marks nine consecutive days of protests.

“Discontent with Duque’s government is mounting. The protests are very diverse. If you go out and ask 20 people why they are protesting, you will get 20 different answers,” said Botero, who does not see any opposition leader at the forefront of these events.

“The opposition is very fragmented in Colombia. Political parties are more polarized than ever. We are one year away from the senatorial and presidential elections, and there is no emerging candidate in the right, center, or left, who’s capitalizing the population’s discomfort,” he said.

Leading the polls with Senator Gustavo Petro, the left benefits from creating a climate of pressure on Duque’s government, according to Torrijos.

The European Union and the U.S. State Department condemned the police violence and urged the Colombian government to moderate the use of the Public Force against protesters.

The events provoked a wave of reactions from artists, athletes and social media influencers from Latin America and the world, who have used their platforms to share what is happening in Colombia. There were messages from worldwide-known musicians Shakira, Juanes, and J Balvin.

Despite these reactions, the president has not condemned the use of violence by the Public Force.

“What Duque has shown is great clumsiness, almost indolence. He has delivered multiple speeches since the protests began but has never expressed any sorrow or sympathy for the victims or their families,” said Botero.

“Colombia is polarized, and broad sectors of the population — the right — agree with the way this has been handled and see no value in the protest,” he added.

“Duque spoke of starting a national conversation, Vélez said. “However, he did not address the fundamental issue of condemning the Public Force’s abuses. … It is very typical of his voters and the party that elected him [the Democratic Center, which holds the position known as Uribismo] to stand by the Public Force.”

Torrijos sees a heterogeneous protest: “You cannot make the mistake of thinking that it is, in black and white, two blocks, the opponents on the one hand and the State on the other.”

He believes that at least five groups are involved in the protests: the State; a group of protesters encouraged by organized armed groups — i.e., the National Liberation Army (ELN) and the Revolutionary Armed Forces of Colombia (FARC), which maintain links with the guerrillas and drug traffickers and have ties with Venezuela’s government; a second group that has taken advantage of the context to vandalize; the third one made up of peaceful opposition protesters dissatisfied with Duque’s government; and a final group of citizens who take the streets to defend public goods and private property, even acting in defense of the police.

“If there have been victims of the police, it is because some police officers — acting as individuals and taking into account that criminal responsibility is an individual issue — have misused their weapons against the orders they have received. According to these orders, they cannot use firearms [against protesters], but rather non-lethal weapons,” said the professor, referring to decree 003 signed into law on Jan. 5 of this year.

Supporters of President Duque, who put him in power in 2018 with 54 percent of the vote, hold that the Public Force has responded to looting and vandalism that were part of the protests. They consider that international observers do not grasp the scale of destruction that decades of violence and drug trafficking have wreaked in their country.

In any case, Botero and Torrijos do not see Duque leaving power anytime soon.

“Colombia is a very institutional country. The forms are still very important in the country. But, despite the police brutality and the fierce and perverse repression that the protesters have experienced these days, there is no call for the president’s resignation or early elections,” said Botero. “An extra-institutional solution is not in sight, but simply a categorical rejection of the government’s way to handle the protest.”

“The president is not in an easy position. On the contrary, from the political, military, police, and economic perspectives, he has fallen into his own trap by not knowing how to handle the variables,” said Torrijos, adding that it is dangerous to believe that restrictive measures will keep the situation under control.

(Translated and edited by Gabriela Olmos. Edited by Kristen Butler and Melanie Slone)