Pashtun nationalists are accusing the state authorities of persecution and continued violence against the community.
By Kunwar Khuldune Shahid May 7, 2021
Facebook
Twitter
Linkedin
Email 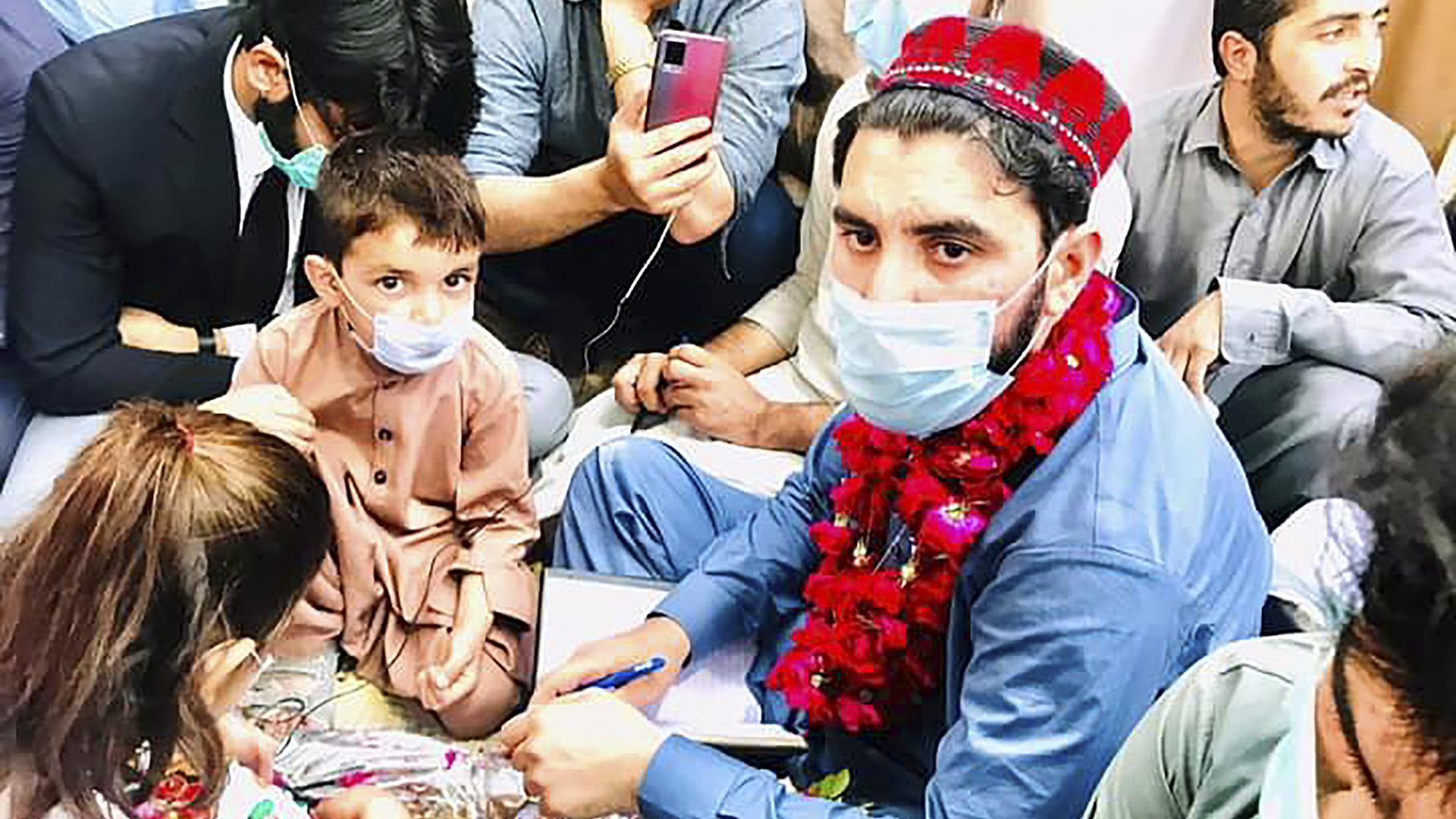 LAHORE, Pakistan — On March 20, Lateef Ullah was about to undertake long due repair work at home in Jani Khel town of Bannu division in Pakistan’s Pashtun-majority Khyber Pakhtunkhwa province. It was a Saturday morning, and he had finally got down to fixing his bath.

After completing his Masters from Peshawar University in the provincial capital last year, Lateef returned to Jani Khel’s Bandikhel village in October to do some social work in the underdeveloped tribal area bordering the former Federally Administered Tribal Areas (FATA). He spends his spare time doing household chores.

As Lateef was about to initiate the restoration work, his phone rang. A friend informed him that a shepherd had discovered four bodies around 5 kilometers (3.1 miles) from Lateef’s home. Four children had gone missing in the area on March 4.

He rushed to the spot only to find the bullet-ridden, desecrated corpses. The dead bodies belonged to four young boys — Atifullah, Razimullah, Mohammad Rahim, and Ahmad — who had gone missing. 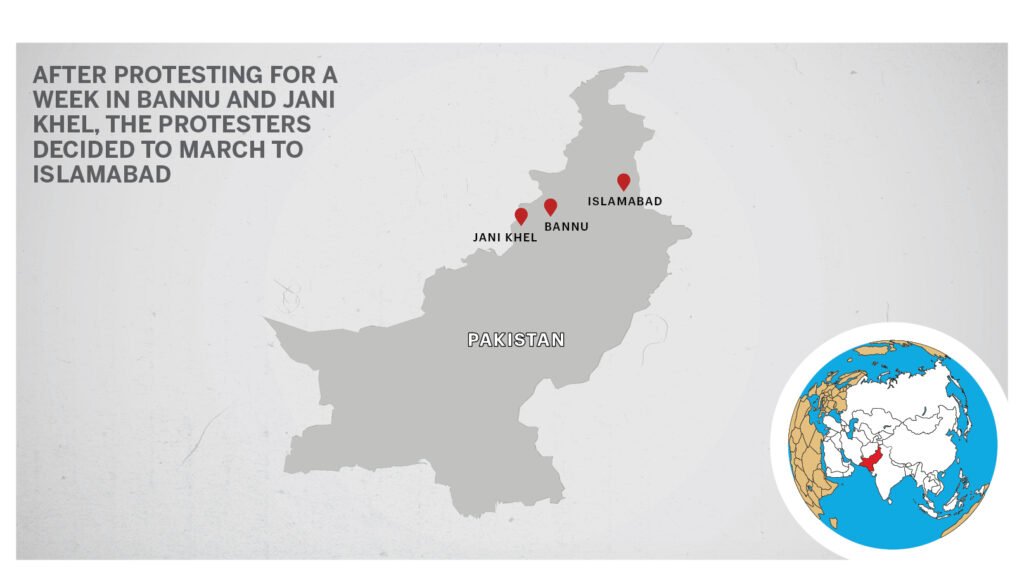 Lateef, along with his neighbors, immediately took the bodies to a local hospital in Bannu. The doctors revealed that the boys, aged between 13 and 17, had been blindfolded, assaulted, with bullets being fired into their chests.

After taking the approval of the boys’ families, Lateef gathered a few locals to launch a protest in Bannu and Janikhel.

“As the reports of the incident spread, more people joined in,” Lateef Ullah told Zenger News. “We decided to demand that a case be filed against the local colonel. After all, the dead bodies were found a few hundred meters from an army check-post.”

After protesting in Jani Khel for a week without any official response, Lateef and the local demonstrators were joined by residents of nearby Pashtun tribes. They decided to march towards Islamabad to put forth their demands.

On the Tochi Bridge in Bannu, the protesters met with law enforcement agencies, who launched tear-gas shells on them. The size of the protesting group had grown to over 10,000 by now. Near the Katchkot Bridge, close to the Bannu Cantonment area, the marchers were targeted with more shelling, with containers used to halt the protest.

Parallel to the action against the protesters, leaders of the Pashtun Tahafuz [Protection] Movement (PTM), Manzoor Pashteen, and Member of the National Assembly Mohsin Dawar were taken into custody to prevent them from joining the Jani Khel protestors and their march to the capital.

The gory violence on display in Jani Khel is the latest in a string of incidents that the PTM has been protesting against for three years.

The PTM began as a movement in the former FATA to underline the after-effects of the military operations in the tribal areas. The movement was formalized in 2018 after Pashtun youth Naqeebullah Mehsud was killed in a fake encounter in Karachi.

The PTM’s list of demands included removal of landmines from the area, elimination of state support for jihadist groups, and an end to enforced disappearances, which the group claims is orchestrated by the Pakistan Army.

Similar demands were put forth by the Jani Khel protesters in the Commissioner’s Office in Bannu in the agreement signed with the government led by Khyber Pakhtunkhwa Chief Minister Mahmood Khan on March 29.

The demands agreed by the government included action against all militant groups in the region; return of missing persons who civilian courts should try; development work for Jani Khel, and a thorough inquiry into the killing of the four youngsters.

“If there is no progress over the next three months, Jani Khel along with nearby tribes Baka Khel, Domail, and others will unite and march towards Islamabad,” said Lateef Ullah.

“This is because these demands aren’t limited to any party. These are the demands of the entire Pashtun nation. When a nation speaks as one, it is powerful,” he said.

The surge in Pashtun nationalism emerged in Khyber Pakhtunkhwa following military operations Rah-e-Nijat and Zarb-e-Azb, initiated in 2009 and 2014 in South and North Waziristan, respectively.

Over a million local Pashtun were uprooted due to these military operations in the former FATA region. The erstwhile FATA, which had been governed by the colonial era, Frontier Crimes Regulation was formally merged into Khyber Pakhtunkhwa in 2018.

However, former FATA remains a hub of lawlessness with the Tehrik-i-Taliban Pakistan and the Islamic State emerging in the region. Locals blame the Pakistan Army’s duplicitous security policies are putting Pashtun tribes at the forefront of the US-led War on Terror in Afghanistan following 9/11.

“The local Pashtun are tired of the good and bad Taliban policy and the state’s need to maintain the gun culture,” PTM leader Abdullah Nangyal told Zenger News. “Please have mercy on the citizens, on our children, and end this war business.”

“This is a Pashtun spring, which has been going on for the past three years. The state has been trying to suppress it and will continue to stop it with increasing aggression. But it won’t be able to because it’s an indigenous movement. The spring will continue till Pakhtunkhwa has peace.”

The PTM, which has taken up the Pashtun nationalist rallying cry, has been systematically targeted by the state. The party’s elected representatives in the National Assembly, Dawar and Ali Wazir, are repeatedly arrested, with the latter in police custody for the past four months.

The PTM is deemed “anti-state” by the government and the establishment for its criticism of the security policies. The mainstream broadcast media continues to censor the PTM, with many of Dawar and Wazir’s addresses in Parliament removed by the national broadcaster Pakistan Television.

PTM workers and protestors are frequently targeted by the state as well. In 2019, security officials opened fire on PTM protestors in North Waziristan’s Khar Qamar area, killing at least 13 and injuring 25.

“You wouldn’t see as much shelling in Kashmir, Palestine, or Myanmar as was launched against the Pashtun protestors in Bannu,” said Nangyal.

Local observers reaffirm that the demands of the PTM and other Pashtun nationalists are not new and have been taken up by the Pashtun leaders of the past.

“The PTM is raising the same questions raised by Bacha Khan” said Mona Naseer, a Khyber Pakhtunkhwa-based writer from former FATA while talking to Zenger News.

“They are asking Pashtuns and the periphery area where do they stand with Pakistan. Is Pakistan ready to accord them the same status they accorded to the Punjabi majority, which has become the dominant ethnic group [in the country]?”

“They are not mincing their words, nor are they appeasing the establishment after suffering the horrific agonies of Pakistan strategic depth policy. Previously the hub of ideological Pashtun nationalism was the settled areas of Pakhtun lands. However, we now see this hub shifted to Waziristan ex-FATA post War on Terror,” she said.

Critics claim the Pakistan Army is continuing to pursue its policy of maintaining lawlessness in the tribal areas to bolster the Afghan Taliban’s bid to take charge in Kabul. They argue that the move to merge FATA with Khyber Pakhtunkhwa hasn’t evolved beyond paperwork.

“[It was a] half-hearted attempt by the state to control the nationalistic fervor of Pashtuns. If the state continues its policy of turning a blind eye to ‘Good Taliban,’ then we will see far worse days than we witnessed previously with its fallout on the core areas of Pakistan, too,” said Naseer.