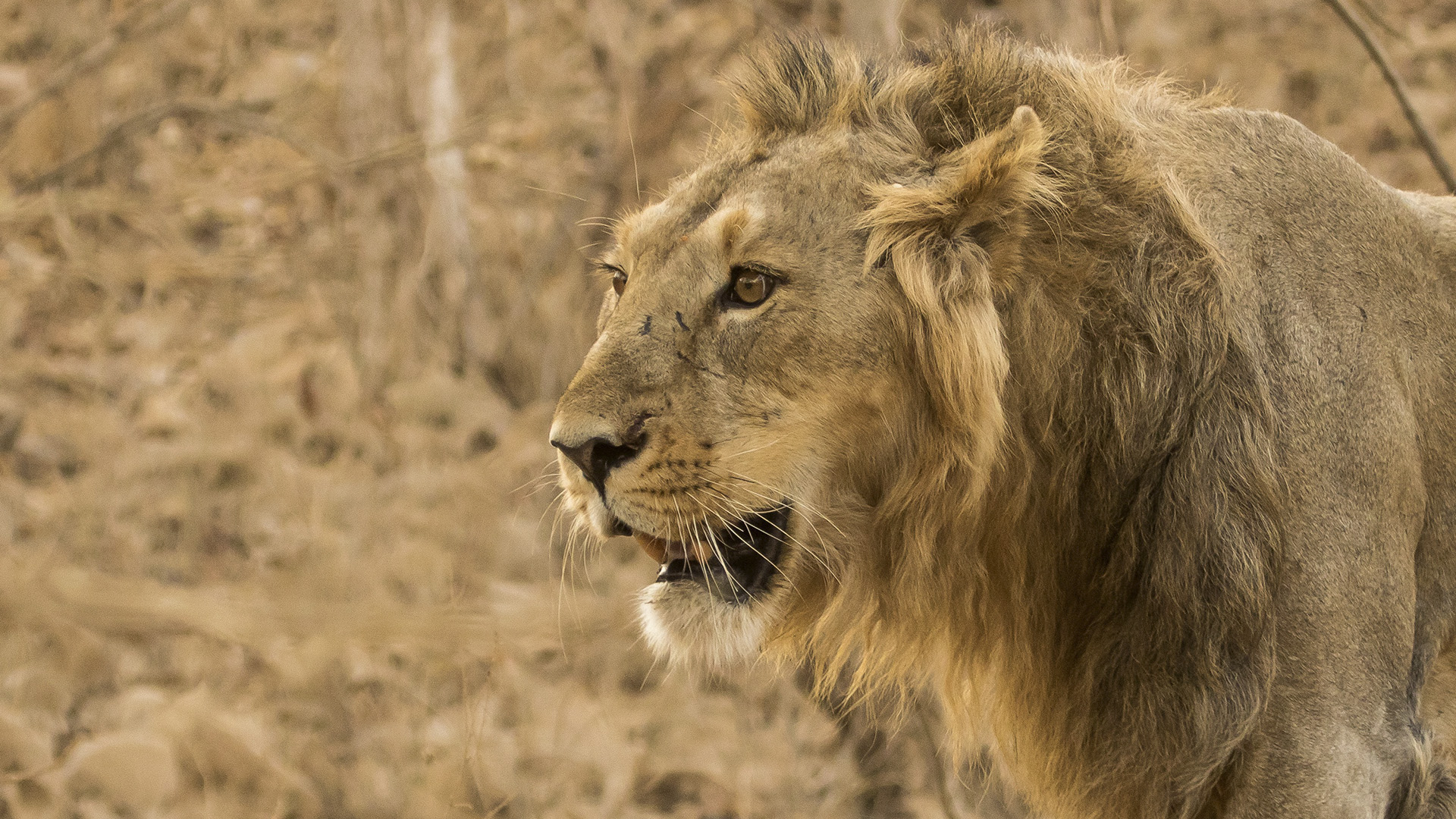 Asiatic lions, which are found only in India and numbered in hundreds, have become the latest big cats to catch Covid-19. (Uday Kiran/Unsplash)

KOLKATA, India — Asiatic lions, which are found only in India and numbered in hundreds, have become the latest big cats to catch Covid-19.

The Nehru Zoological Park of Hyderabad, in India’s southern state Telangana, said eight lions, four of each gender, were found infected by the coronavirus.

“The lions were in the lion safari enclosures,” V.V.L. Subhadra Devi, one of the curators of the Nehru Zoological Park, told Zenger News. “After we saw symptoms, we immediately sent the samples for testing the possibility of the virus in them.”

Siddhanand Kukrety, a curator and director of the Nehru Zoological Park, said the lions are “doing well and eating properly.” The infected lions, aged around 10 years, have been isolated. There are four more lions in the zoo.

The International Union for Conservation of Nature (IUCN) lists Asiatic lions as endangered in its Red List. Prakash Javadekar, the Minister of Environment, Forest & Climate Change, has said 70 percent of the Asiatic lion population is found in India. 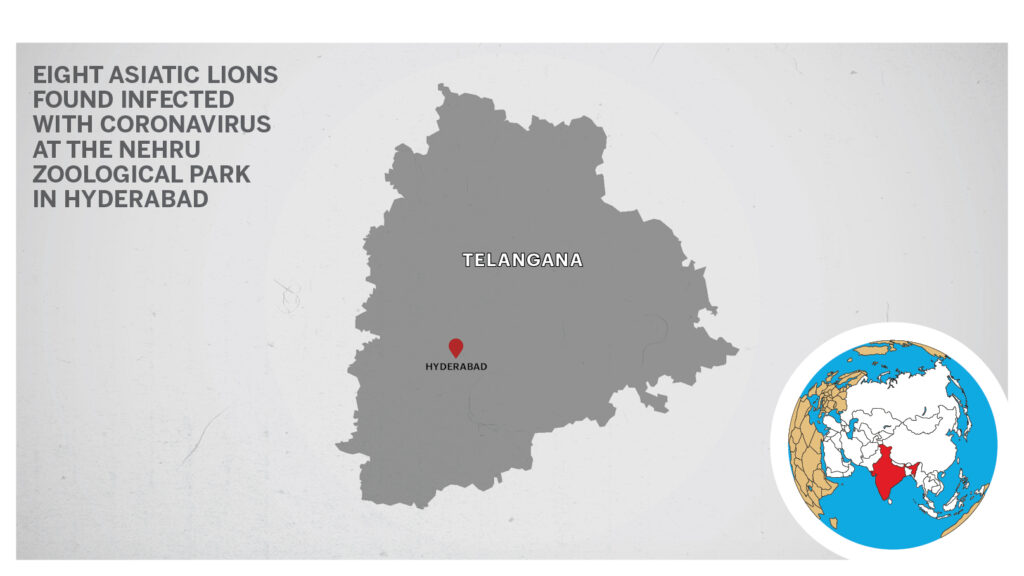 The IUCN website warns that Asiatic lions exist as “a single subpopulation and is thus vulnerable to extinction from unpredictable events, such as an epidemic or large forest fire.”

Three years ago, India’s Asiatic lions were struck by an epizootic infection caused by the canine distemper virus.

“During two weeks in September 2018, the unusual death of 28 lions of all age groups was reported from Gir Wildlife Sanctuary,” a paper published by the United States Centers for Disease Control and Prevention in 2019 states. “We detected the virus in samples from 68 lions and six leopards by reverse transcription PCR.”

Keeping these endangered animals safe while India battles one of the worst second waves of Covid-19 will be a challenge. Daily cases have consistently gone over 300,000 and on days even 400,000.

The Asiatic lions inhabited much of Western Asia and the Middle East to northern India. But now, the Gir National Park and the surrounding areas in India’s western state of Gujarat are its only natural habitat. Some are housed in zoos. So, it becomes critical to keep the virus from transmitting to the animals through caretakers.

At the Nehru Zoological Park, at least 20 caretakers tested positive in the past few weeks.

On April 24, the Nehru Zoological Park’s veterinarians noticed some lions showing respiratory distress, which is one of the symptoms of the deadly Covid-19. Samples were collected from the nose, throat, and respiratory tract of the lions under anesthesia.

“Based on detailed diagnostic tests and report as shared by the Centre for Cellular and Molecular Biology, LaCONES, on May 4, it has been confirmed that the eight Asiatic lions have tested positive for SARS-CoV2 virus,” said a press release from the Ministry of Environment, Forest and Climate Change.

LaCONES is India’s Laboratory for Conservation of Endangered Species.

Analyses of the samples have revealed that the infection was not caused by “any variant of concern,” the release states.

India’s Central Zoo Authority has issued guidelines on precautions to be undertaken due to the increasing number of Covid-19 cases.

“All recognized zoos are advised to enhance surveillance for any symptoms in captive animals that are characteristic to infection of the SARS CoV-2,” it said in a press release.

R. Shobha, Principal Chief Conservator of Forests and chief wildlife warden, Telangana, told Zenger News that zoos in the state had been asked to shut.

“Zoological parks like the Nehru Zoological Park and Kakatiya Zoological Park; the national parks and the reserves, all have been asked to shut down until the situation is assessed,” Shobha said.

Rakesh Mishra, the director of the Centre for Cellular and Molecular Biology, told the press they are developing a method to test the sample of animal feces. “Every time, it will not be possible to collect saliva samples from wild animals,” he said.

This is the first time India is reporting Covid-19 in its wild animals.

But Covid-19 has infected wild animals worldwide, mostly those that came in close contact with humans carrying the virus. Nadia, a tiger at New York’s Bronx Zoo, tested positive for Covid-19 on April 6, 2020, along with six others.

Four lions at Barcelona Zoo, Spain, tested positive in December 2020. Snow leopards at the Louisville Zoo in Kentucky were infected with the virus in the same month.

Though none of these felines have died, Pakistan’s Lahore Zoo reported two white tiger deaths who “appeared to have Covid-19”.

World Health Organization representative to Russia Melita Vujnovic recently said transmission of Covid-19 from humans to cats, dogs, minks, lions, and tigers is possible. The Centre for Disease Control and Prevention has also said cats, dogs, mink, lions, and several other mammals are vulnerable to the SARS-CoV-2 virus.

But a tweet from India’s Ministry of Environment, Forest, and Climate Change says, “there is no factual evidence that animals can transmit the disease to humans any further.”

“More studies are needed to be done on this issue of animal-to-human transmission and the vice-versa,” Anmol Ohri, an animal activist and the founding director of Climate Front India, told Zenger News.

“India should be taking aid from Russia who has started producing vaccines for animals.”

“There are indeed worries of animal to human transmission now that animals are testing positive. The Central Zoo Authority needs to ensure this does not spread. They should take proper care of the animals in the zoological parks.”

The Asiatic lion, once faced with extinction, has shown a population recovery due to conservation efforts. The latest count in India puts Asiatic lions’ number at 674. Last year, Prime Minister Narendra Modi tweeted to express his happiness over the rising lion population.

India conducted the last population estimation exercise in May 2015, which pegged the numbers at 523, a 27 percent increase from the estimation of 2010.

The next estimation was scheduled for June 2020 but couldn’t be done due to the pandemic. The Gujarat Forest Department then conducted an exercise called Poonam Avlokan in June 2020 using the Direct Beat Verification known as the Block Count method. Forest staff of 13 administrative divisions involving 1,400 personnel was involved in the count.