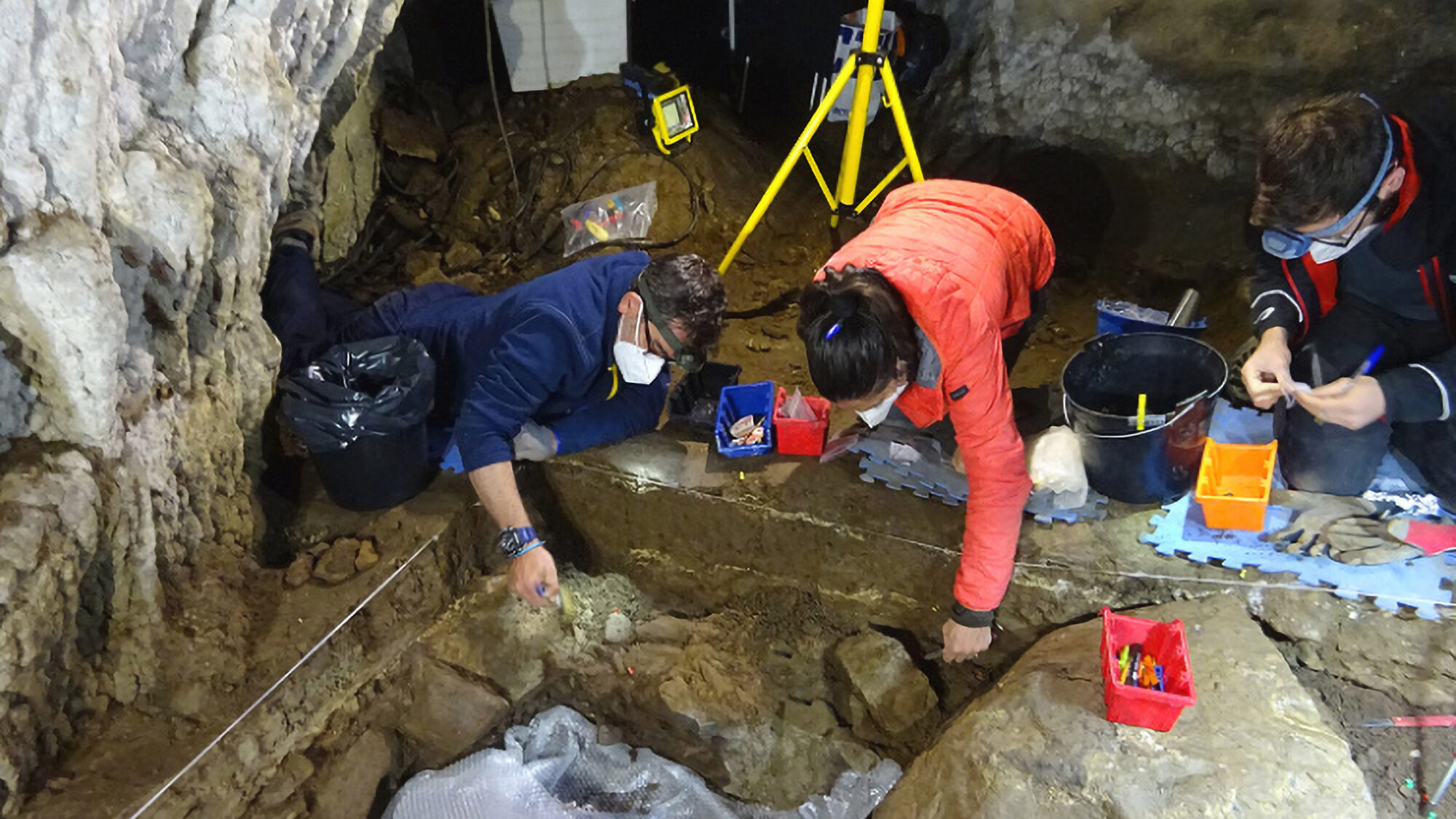 Members of the research team in the Isturitz cave in southern France in April. (UPH-EHU/Real Press)

Dozens of fragments of mammoth bones displaying blow marks, confirming that mammoths were hunted by humans living in the cave 30,000 years ago, have been discovered at an archaeological excavation in southern France.

The mammoth bone fragments were found in a new excavation at Isturitz cave in the Arberoue Valley in the foothills of the Pyrenees.  A team of 20 international archaeologists made the discovery in April.

The Isturitz cave was discovered in 1988, when a mammoth scapula was found there, along with thousands of remains. In the latest excavation, more mammoth bone fragments were found, in addition to the remains of stone tools.

Aritza Villaluenga, a professor and researcher at the University of Basque Country, Spain, said the remains from the cave belong to medium-sized and large mammals, such as reindeer, deer, horses, bison and mammoths.

The presence of the mammoth remains is not coincidental, as “they were hunted and carried from the valley to the cave and, once there, humans broke them to take the bone marrow,” Villaluenga said.

The finding is said to be confirmation that Homo sapiens in southern Europe hunted mammoths during the Upper Palaeolithic period. Previously, there was only evidence of mammoths hunted in the caves of Arcy-sur-Cure in north-central France.

Mammoths were not typical prey for humans, due to their large size, Villaluenga said. Instead, humans preferred to hunt deer or horses. However, at that time, during the last glaciation, temperatures were low and “humans had to hunt this food source due to the climate,” he said.

Mammoths, which could weigh as much as 4 tons, were dangerous to human groups during the Upper Palaeolithic. It is believed the cave-dwelling humans had to start hunting them, selecting the younger or smaller ones.

The hunting method is still unclear, but according to Villaluenga, the mammoths were killed outside the cave and their remains taken inside.

“When they hunted an animal, they tended to take off the meat, break and open the bones in order to eat the marrow. Those bones were broken into small pieces until becoming a kind of net joined together by an outer skin, and they were burnt and used as fuel,” he said. “Despite the fact this fuel illuminated less than wood and gave off less heat, it did not give off smell or smoke, which is very important in a cave.”

He said humans also hunted mammoths for this reason, since there was not enough wood in the surrounding forest during cold temperatures.

The archaeologists also found remains of other animals and tools, especially those made of flint.

They also found marine shells with holes in them, which “indicates that they went to the coast, located around 30 kilometers (19 miles) away, and took them back to the cave with them.” He said it is clear marine sources were exploited by humans living in the cave for thousands of years.

The cave is in a strategic location, “like a roundabout, where humans moved from the north to the Pyrenees and other parts,” Villaluenga said.

The archaeologists plan to carry out radiocarbon dating on the fragments. The lab research could take about two years.