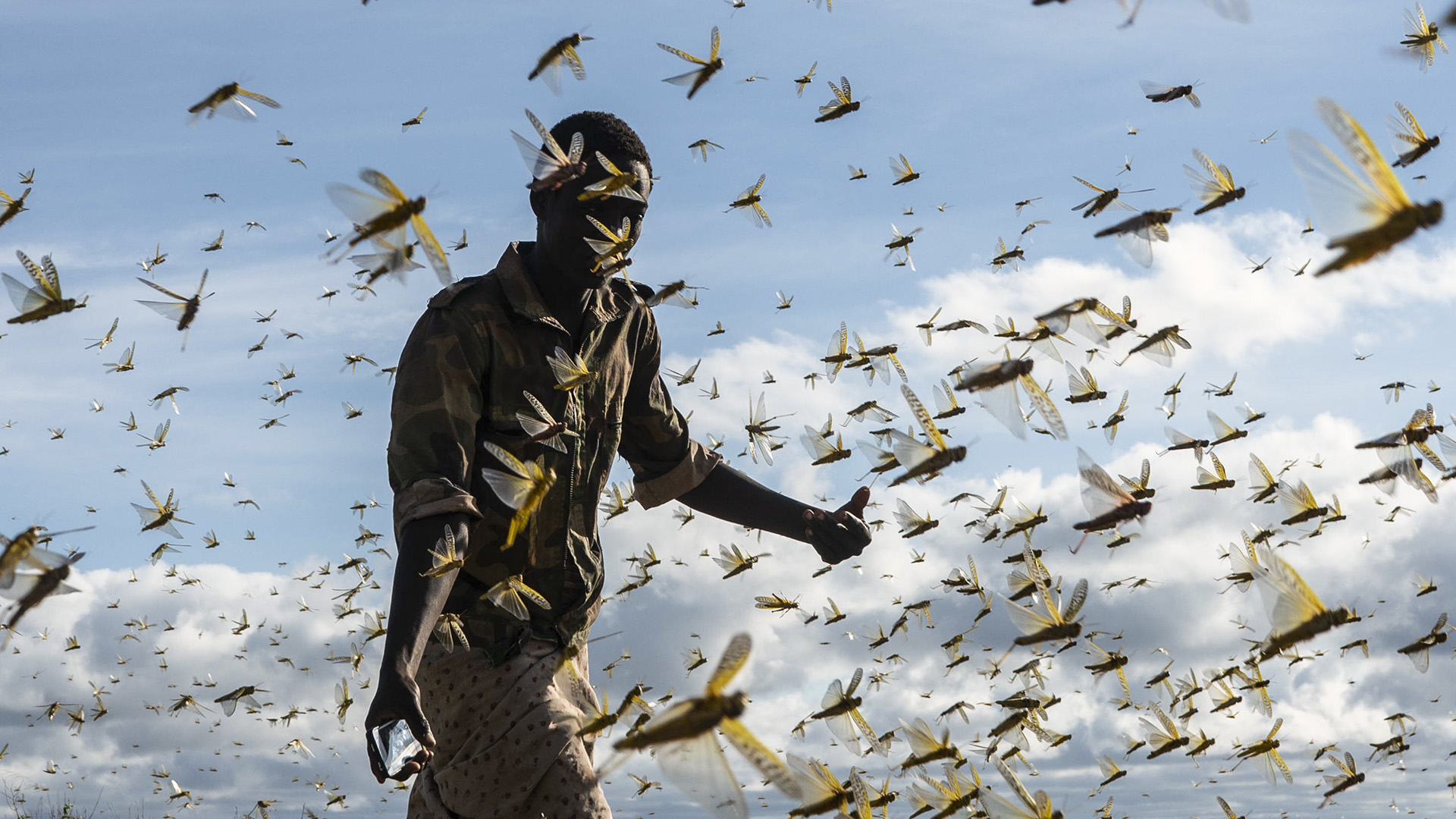 A man is chasing away a swarm of desert locusts in Samburu County, Kenya. Trillions of locusts are swarming across parts of Kenya, Somalia and Ethiopia, following an earlier infestation in February. (Fredrik Lerneryd/Getty Images)

NAIROBI, Kenya — When farmers see rain clouds, they happily prepare their lands for planting. However, these days the clouds have become a source of worry to Charity Wanjiru 45, a smallholder farmer in Molo, 180 kilometers (112 miles) west of Kenya’s capital, Nairobi.

Not long ago, Wanjiru’s one-acre plot produced 80 sacks of potatoes in three months, but that number has decreased to 60.

She blames the changing weather patterns for the decline in the productivity of her farm.

“Too much rain experienced in her area lately rots the potatoes,” she told Zenger News. “We are counting losses.” 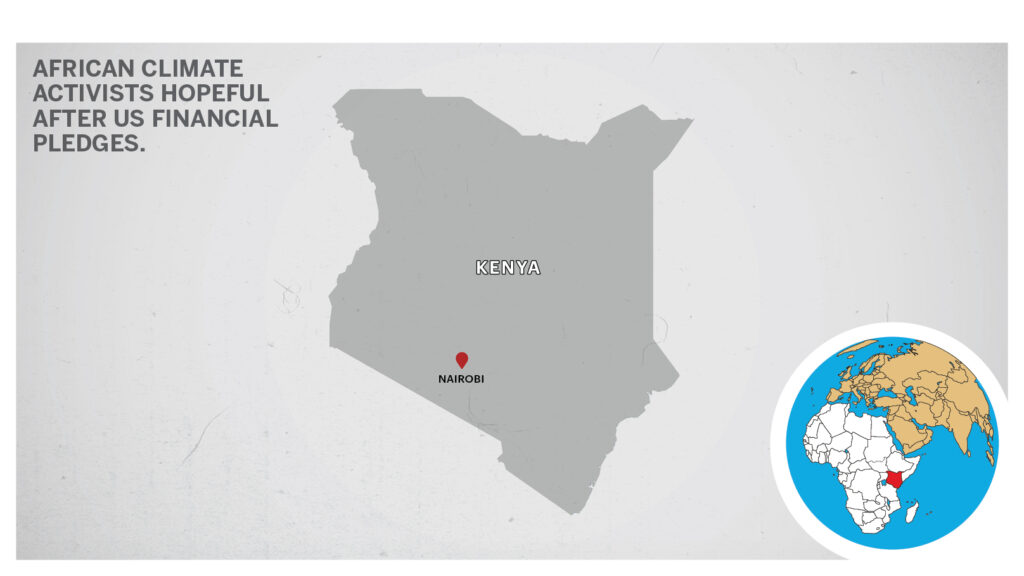 “I hope this year the harvest will be good. At least we have something to harvest compared to the farmers whose crops were invaded by locusts,” she said. A locusts invasion has hit Eastern Africa since late 2019.

The mother of four says at some point she thought of switching from potatoes to other cash crops.

“Years back, we used to plant maize and beans, and we were clear on the planting seasons, but now it is not predictable,” she said.

She entirely depends on her small farm to feed her family. The extra money she makes from the farm enables her to educate her children.

Many other farmers like her in her village and beyond are feeling the impact of the change in weather patterns in recent times.

Other African countries which rely heavily on agriculture Liberia, Somalia, Guinea-Bissau, and the Central African Republic, according to a report titled “Agriculture in Africa” by the New Partnership for African Development.

The conversation on climate change evokes mixed reactions from different parts of the world.

What caught the interest of African climate experts was the rich countries’ commitments, which, if followed, could be a win for the continent.

Biden promised to double the United States’ public financial contribution to climate change in developing countries and triple funding for its adaptation by 2024. However, he did not give actual figures.

Other financial pledges were made by the United States, United Kingdom, and Norway, and nine private companies dubbed the Lowering Emissions by Accelerating Forest Coalition.

The group aims to invest $1 billion in tropical and subtropical countries that reduce deforestation and forest degradation emissions.

For Africans, the commitments are an opportunity for developed nations to fund low carbon emission projects while African countries seek climate adaptation and mitigation opportunities.

Although Africa’s carbon footprints are small, according to the United Nations Climate Change, African countries are the most vulnerable and least prepared for extreme weather patterns like desertification and invasion of desert locusts.

Twenty-five-year-old Elizabeth Wathuti, an environmentalist and climate activist in Nairobi, told Zenger News that the Biden administration’s commitments to fight global warming send a positive signal to the world on climate issues.

“It’s good to see the United States take on climate matters,” she said. “The world needs that right now. Countries should invest in low-carbon emission projects. We should reconsider our energy and transport sectors if we want to reduce global temperatures. The climate crisis is a global problem that every country should prioritize.”

After his inauguration on Jan. 20, 2021, one of Biden’s first actions was to return to the 2015 Paris Climate Agreement after his predecessor Donald J. Trump withdrew from the accord in June 2017.

Inspired by the late Kenyan conservationist and Nobel Prize winner Wangari Maathai, Wathuti applauded African leaders for speaking in one voice during the summit and holding rich countries accountable.

She said African countries tried to push the developed nations to honor the polluter-pays-principle, which states that countries with high pollution levels should bear the costs of managing climate change.

“African negotiators stepped up this time. They urged rich countries to deliver their promises. This is the road map we need for United Nations Climate Change Conference. Africa bears the brunt of climate change,” she said.

The 26th edition of the Parties to United Nations Framework Convention on Climate Change Conference (COP26) will occur in November 2021 in Glasgow, Scotland.

Mithika Mwenda, the executive director at Panafrican Climate Justice Alliance, told Zenger News that commitment itself would not solve the climate crisis, but action and follow-up will do.

“Countries are willing to work on climate issues,” he said.

“What we should be worried about are the future generations. What kind of planet will they inherit? Are countries doing enough? What kind of sustainable projects are we financing? If we start asking ourselves those questions, then we are on the right track. Until then, we have a long way to go.”

However, it remains to be seen if rich countries will abide by their commitments.

“We are tired of boardroom deals,” Oladosu Adenike, a Nigerian “eco-feminist”, said. “It’s time to walk the talk.” She was speaking in a Twitter chat organized by the Panafrican Climate Justice Alliance on April 22.

Samuel Nyamwange from Kenya said: “No more empty promises. Climate crisis requires a collective approach. If we can substitute the use of fossil fuel with renewable energy, the better. Let’s prioritize sustainability”.

(Edited by Kipchumba Some and Amrita Das. Map by Urvashi Makwana.)