The duo from Ghana make a point of treating their customers as family.
By Hamil R. Harris May 5, 2021
Facebook
Twitter
Linkedin
Email 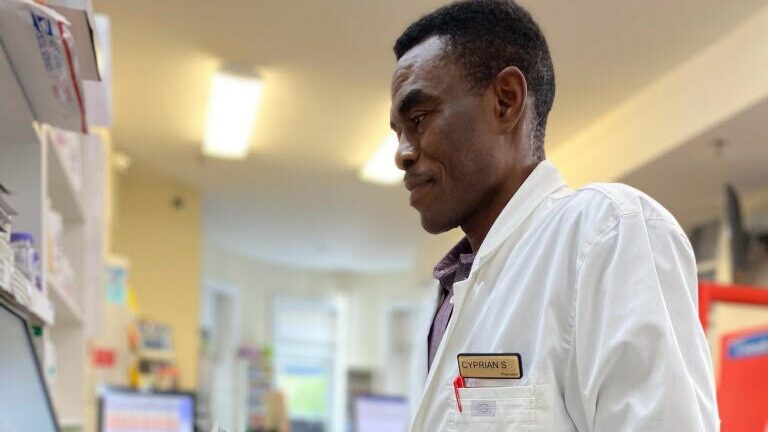 WASHINGTON, D.C. — While corporate pharmacies are the order of the day, one Washington, D.C., pharmacy has become a prosperous neighborhood enterprise.

Two classmates from Africa have found a prescription for success.

Instead of having people wait in line at their Dupont Circle Pharmacy, Cyprian Sabah and his partner Alfred Addico spend part of their day delivering prescriptions to customers around the nation’s capital.

And they love it.

“It is so easy to help clients and community members who are too busy to pick up their own medications,” Sabah told Zenger News. “At Dupont Circle, we try to treat every person as a family member, just like we pick up mom’s medication … and deliver it to [their] home. We do this for all of our clients.”

“Sabah typifies the highest professionalism along with a great deal of humility, and that is unusual to find in an individual,” said D.C. attorney Adgie O’Bryant Jr. “He always takes his time to answer all of my questions. He makes sure every need I have is met to my complete satisfaction.”

The two men opened the pharmacy in 2017. Both have been working in the D.C. area since they came to the United States from Ghana, where they were educated. Then they applied for a special visa.

“The U.S. Department of State allows some of us to come to this country if we are not a burden, but a benefit to this nation,” Sabah said. “If you study sciences, it is easier to come.”

“I didn’t want to stand in my office and someone a thousand of miles away at a computer is telling you what to do,” said Sabah, who did not want to work for a major chain.

Sabah said operating an independent pharmacy has allowed him to personalize his business. He now has clients all over the area who drop by his store if they are unable to get their prescription filled at major chains.

“People are always shocked when they can’t find medicine at CVS, Walgreens or Giant [but] we find it,” Sabah said. “When there is a hard-to-find medication, that is when we go to the manufacturer and get it.”

Addico and Sabah have known each other for more than 20 years from when they were “bunk mates” in college. He said in terms their business and pharmacy: “We have a shared mindset.”

“My parents are back home in Africa, and I believe if I take care of peoples’ parents here, someone will take care of my parents back home,” Addico said. “On a richer level, we are closer to the customers. CVS has a corporate office, a regional office and a district office, but we just have our store.”

Sabah had a much different life than Addico growing up in Ghana. He was one of six children whose parents divorced when he was five.

“My mom left when my baby sister was three, my brother was seven, and my big brother was 15.  We were from the Volta region. My father was a police officer, and they were transferred every two years to different regions of the country,” he said.

“So many times we went to school on an empty stomach,” Sabah said. “Dad took care of his six children, but was a serious alcoholic. I never had a blanket or sheets growing up. The last time I saw my mother, I was 25.”

In addition to his pharmacy duties, Sabah is working with state officials to administer the Moderna COVID-19 vaccine to groups of people. He said he loves his job and long gone are the days when he is shut in behind a counter.

“It is so personally gratifying doing what you are trained to do. It is enjoyable,” Sabah said. “It is energizing. It doesn’t get better than this.”

Sabah, who is married and has three children, lives in Bowie, Maryland, and sees life as an extension to his relationship with God. He was baptized in December 1989.

“Christianity is the foundation of everything that I do, and that is service to mankind and service to God,” he said. “I take care of my brother. It is what God wants me to do.”

An earlier version of this article misquoted Cyprian Sabah as saying the pharmacists were from the Ghanaian region of Botha. The region is called Volta. Zenger regrets this error.